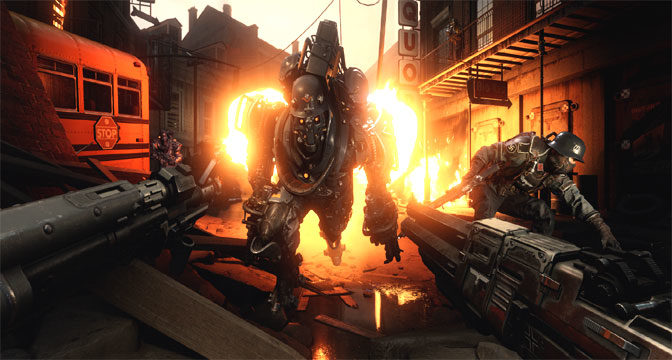 Wolfenstein: The New Order just came out of nowhere and blew me away. I was disappointed with the previous game but the follow up was a breath of fresh air, especially when I thought shooters were becoming way too stale. Then DOOM 2016 reboot took it one step further and it convinced me that Bethesda were perhaps the only publisher out there who were really committed towards keeping shooters a single player experience.

And for that, I say, thank you!

Wolfenstein II: The New Colossus again is a single player shooter, though Bethesda prefers to call it an adventure since they want you to experience the whole game instead of just the shooter mechanics, and I agree with the way it turned out. 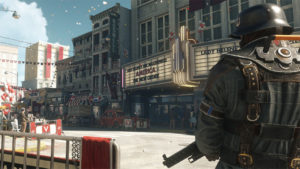 Taking place immediately after New Order ended up, BJ Blazkowicz is found by his colleagues in a near death state. While escaping Deathshead’s compound and the impending nuclear surgery, he is operated on and saved at the last minute. Waking up six months later aboard the stolen Eva’s Hammer, he wakes up to find it under attack by the Nazis, led by a vengeance seeking General Irene Engel.

Furious over him killing her lover, General Engel abducts fellow allies Caroline Becker and either Fergus Reid or Private Wyatt (depending on who you choose to survive the first game,) calls out for the now christened “Terror Billy” to surrender. Bound to a wheelchair he has no choice but to surrender to her in an attempt to save his friends.

Engel gets her first taste of revenge, stripping Caroline out of her Da’at Yichud power armor and orders her heavy-set daughter Sigrun to murder Caroline. Despite Sigrun’s refusal to do so, Irene finishes the job herself, decapitates Caroline, and in a truly sadistic manner, uses her head to kiss BJ over and over again.

Sigrun betrays her mother and helps BJ (now in Caroline’s armor) and Fergus/Wyatt escape, and they start their work on Caroline’s plan: the liberation of the United States including visits to the atomized remains of “Neu” York City, Roswell, New Orleans, and even back in space. Along the way he meets up with other fellow resistance fighters set to plan a huge movement over the Nazi regime.

But now BJ also has personal matters he is dealing with, and they center around his racist, abusive father, Rip. Taught at a young age to resent minorities and be a stronger man, BJ eventually catches up to him and deals with his demons before all hell literally breaks loose with his life, but I won’t go into that as the rest of the game needs to be experienced for yourself.

Those who may be used to the heavy feeling gunplay from the first game will be pleased to know that it is back, even allowing double wielding of weapons. However, this time, different weapons can be double wielded. Pistol/Shotgun combination? No problem. Assault Rifle/Machine Pistol? You bet. Double shotguns? Duh! In addition, throwing weapons (in this case, small hatchets) make a return.

However, there is a catch to all of this, especially in the beginning. Due to his grave wounds, at the beginning stages of the game, BJ’s health maxes out at only 50 points. Sure, he can overcharge like before, but still when it goes back down to 50, survival is of the essence, at least until a key moment in the game which again I will not mention.

[amazon asin=B071WPKZ7Q&text=Help to liberate the world from Nazi opression with your own copy of Wolfenstein II: The New Colossus! ]

As before, Nazi commanders prowl locations, and when detected, they will summon reinforcements until they are killed. These officers also carry around Enigma Codes, which are now used to unlock side missions that center around assassinations of other key Nazi officers. 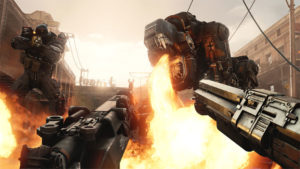 There are also other secrets that can be found in the game, including a spot on parody of Wolfenstein 3D, or in this case, Wolfstone 3D. Just picture the 1992 PC classic only this time it is Elite Hans (this game’s universal equivalent of GI Joe) who is the good guy and the Kreisau Circle who are the enemies. Replace all the portraits of Hitler with those of Terror Billy, have all the enemies now speak English (Achtung becomes Look Out, for instance) and you get the idea of what to expect.

But what I did not expect, and I know this will come as a spoiler but it’s been posted enough already, is this game’s version of Hitler. You thought you seen enough parodies of him in the past? You’ll think again after seeing this one. It just continues the trend of dark humor this game is known for. 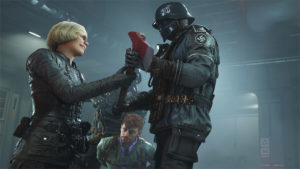 And with the voice cast returning from before, you can see why. They were great in that game and continue to be here. Even if Brian Bloom is continuing the whispering inner monologue from before, it’s still a delight to listen to. And Nina Franoszek almost steals every scene she is in with her vile portrayal of General Engel. You will end up hating her a lot more than you did when you saw her mangled face for the first time in New Order.

The epic Mick Gordon soundtrack makes another return, as well as the parodies of 1960s music with fictional Beatles parody Die Kaffer as an example. The whole package sound quite good. 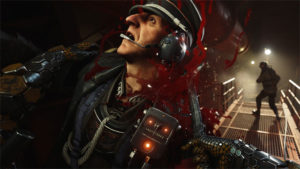 And looks good too, especially on Xbox One X. When I played on the S there were times that the frame rate did choke up a bit, though not on the X. The game runs a flawless 60 frames per second and is as close to 4K as it can be. I will admit that I did see some glitches in the graphics. One perfect example was when I was exploring a bunker and the giant ACHTUNG text on the wall appeared to just draw in at a certain distance. Hopefully these issues will be resolved with a patch, because they are the only black marks on an otherwise beautiful package.

The main campaign can be beaten in about 10 hours, though it can be played on two timelines, doubling the length. In addition, finding all the extra features and completing the Enigma Code Assassinations will expand the game more. In addition, there is now an Arcade Mode similar to that in DOOM and three additional DLC missions called the Freedom Chronicles coming soon. 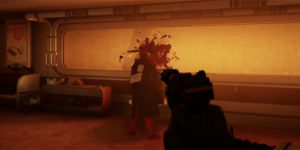 I do have to say though the ending can be seen somewhat disappointing, as it gave me a slight sense of what I call “Second Chapter Blues.” It’s not really sequel bait like I saw in Call of Duty: Ghosts, but it’s still rather abrupt and only could lead to the end of a trilogy. But if it’s as fun as New Colossus is, I’ll gladly wait for it. Just give us a satisfying ending, Machine Games!

Pros: Exceptional story that continues from the first game. Just like before, the guns feel just right. As humorous as ever. Enigma Code side missions add to the game once the main story is done. Xbox One X enhancements take the game to a whole new level…

Cons: …but they do show some glitches at times, which will hopefully be patched. Starting off with only 50 health might make the game harder than it should be to begin with. The case of “2nd episode ending” blues strikes again.