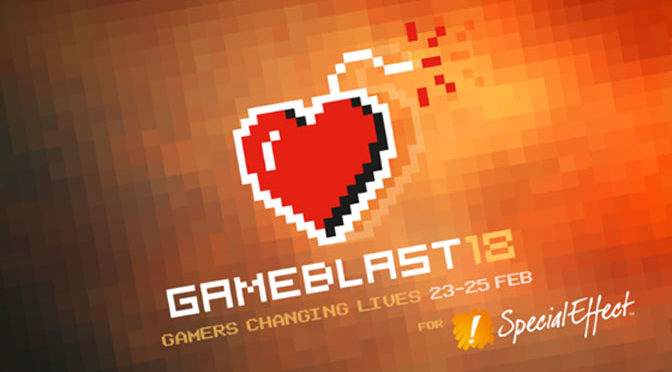 SpecialEffect has announced that GameBlast will return for the fifth time next February, with registrations now live via the event website: https://www.gameblast18.org.uk.

The event, which has generated over £500,000 in donations since 2014, will see gamers uniting to raise vital funds in support of the charity’s work with severely disabled people across the country.

Described as “the best excuse to game ever”, GameBlast invites participants to set their own sponsored gaming challenges between Friday 23 and Sunday 25 February. What started five years ago with a small number of hardcore gamers, has now grown hugely in popularity to include over 300 University societies, community groups, studio teams and individuals. Many of these will be livestreaming their exploits over the weekend. 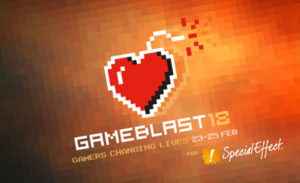 For 2018, SpecialEffect are delighted to welcome Jagex back to the GameBlast fold. The creators of RuneScape have become synonymous with the event, and will be staging another 24-hour livestream extravaganza from their studio in Cambridge, running from Fridayto Saturday.

Neil McClarty, Vice President of product management at Jagex, said: “Our previous 24-hour livestream show for GameBlast was the most successful ever. Packed with entertainment, games, and big names from the studio and the streaming community, the show went on to raise an incredible £100,000 for SpecialEffect thanks to our fantastic community of RuneScape and Old School players. For GameBlast18, we’re opening the 24-hour stream to other game studios to join the Jagex team and showcase their people and games and present an industry-wide marathon broadcast to support this inspirational charity.”

GAME and Multiplay will also be continuing their close relationship with the event. Plans are currently in the pipeline for a 24-hour broadcast from their Basingstoke HQ that will pick up the baton from Jagex on Saturday and run through to Sunday, alongside a range of awesome fundraising activities across their retail stores and BELONG venues nationwide.

Natalie Amosu, Chief Marketing Officer at GAME, said: “GameBlast is a true GAME family affair, combined with overwhelming support from our publishers and favourite suppliers. For the third year running we will be hosting a 24-hour livestream and online auction of special edition merchandise and memorabilia, whist in our stores there will be cosplay, competitions and raffles to help encourage donations. SpecialEffect holds a special place in all our hearts and minds here at GAME Digital and GameBlast really brings out the best in our people business-wide. It is an honour to support such a positive life changing (or is that truly game changing) cause.”

Alongside GAME, Multiplay and Jagex, GameBlast also enjoys support from fellow event partners Twitch, ukie and Insert Coin, who will once again be creating a special edition t-shirt with all profits going towards the GameBlast18 campaign.

Tom Donegan, Events Coordinator at SpecialEffect, commented: “It’s great to be gearing up for GameBlast again! Over the years we’ve built up a fantastic relationship with the gaming community, who really see the value in the service we provide to gamers with disabilities in allowing them to play alongside their friends and family, sometimes for the very first time! I would heartily encourage all previous participants to register now for 2018, and for anyone who hasn’t been involved up to now…well, what are you waiting for? Come and join the fun and help transform lives by doing the thing you love best!”