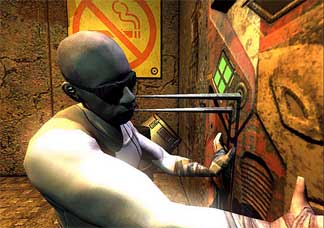 Not many games based on movies work out so well.

Last year’s Enter the Matrix was without a doubt on of the year’s biggest flops: an unoriginal Max Payne-style game with limited gameplay and a flawed, buggy execution. Of course, there are exceptions, such as EA’s excellent Lord of the Rings titles, but they were based on box office successes.

But what about a game that was based on what some can consider a box office failure?

Vin Diesel’s Chronicles of Riddick arrived in theatres earlier this summer, but didn’t truly make a splash at the box office. Raking it at only $57 million at the time of this writing, it was hardly up to the box office tallies of the more successful Spider Man 2 ($328.5 million), Shrek 2 ($429.4 million) or even the surprise hit Dodgeball ($109.3 million)

But what is surprising is how a game somewhat based on a box office failure can work out so well. Not really based on the recent Chornicles of Riddick movie, the game is more of a prequel to it and the predecessor Pitch Black. Vin Diesel’s character Richard B. Riddick was just captured by a bounty hunter known only as Johns and is sent to Butcher Bay, supposedly the most maximum security prison in the universe. Escape from Butcher Bay is impossible, but not to Riddick, who must find a way to escape the complex and get even with the warden who has him captive.

Anyone who has seen Pitch Black or its sequel knows that Riddick has a unique sense of vision, an Eyeshine which allows him to see in the dark. When the game begins, he doesn’t have the Eyeshine but as the story progresses, we learn more about Riddick and how he acquires his mysterious vision.

For a game centered around a character with unique eyesight, the whole experience is presented in a first person perspective. And while it controls similar to a first person shooter, it is a lot more, as Riddick is able to look over his surroundings and interact with the environment from his eyes.

At key elements in the game the view will shift to a third person perspective to get a better view of the action, and it is also a great way to show off the amazing graphics engine. Using the same normal mapping technology of DOOM 3, the visuals on Riddick are perhaps the best ever seen on the Xbox.

When you look at Riddick up close, you actually believe that Vin Diesel is in the game himself. There are times that the engine will get a little fuzzy, or chop up, but most of the time it is very fluid and unbelievably gorgeous. Seeing this game in action will give an idea of how DOOM 3 will run graphically on the Xbox.

While the game itself is an amazing work of art, I can only wish it was longer. Most players can complete it in only 10 hours. Sure there are hidden extras that are found inside cigarette boxes, but they are mostly concept sketches and movie stills (though there is the rare production video). Also, the game is single player only, so no chances of deathmatch on Xbox Live, which would have improved the replay value significantly.

Nonetheless, Riddick is an amazing benchmark for what the Xbox can do, and for the time it lasts, it is a very engrossing title. Should Tigon Studios (Vin Diesel’s production company) and Starbreeze create a sequel to Riddick, I only hope it is much longer because I would enjoy another escape from a maximum security prison.