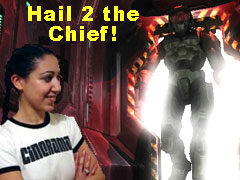 Well, its official and I have to admit pant-wettingly excited wouldn't be an overstatement. Halo 2 is bringing its hotly anticipated presence to Gamestars Live. Now, we've already been through this in my last column people – Gamestars Live is the all singing, all dancing consumer event attached to EGN. Oh, do keep up – EGN aka European Games Network aka the final nail in the quite pitiful coffin of ECTS and London's newest games trade show.

At last London, always the last to get anything, is being treated with the respect it deserves. The British are highly respected the world over for their propensity to queue – we even have a special word for it. For you yanks that would be, standing in line or malingering in a row or standing in domino formation. And this September we'll be queuing like we've never queued before.

Of course the Russians are also well versed in queuing, so we may have some competition, but who cares. It'll be a European Union of queuing, which just goes to show how an alien invasion could bring nations together. Send some Covenant scum down and we'll form an orderly queue in order to beat the crap out of them.

Yes, I'll be there with the best of them, donning my comfy (but pretty) shoes, packing some fish paste sarnies and setting up camp to get my two minutes on Halo 2. Halo 2 people – it doesn't get much better and I'll be there to bring you a blow by blow on every beautiful second of it, so tune in for my reports.

This inspired me to check out the rest of the gems Gamestars Live is promising to deliver. The boastful press releases have been slow in coming, so the details are a little sketchy.

I can tell you that Prince of Persia 2 is going to be playable. Apparently the prince in question is older and wiser…I think that was the sound of my interest being piqued (it's kind of a squeaky sound, not dissimilar to someone making balloon animals, in case you were wondering). This is the first chance for folks to fling the prince up and over harem walls and wonder at the loveliness of it all again.

Next up is Nintendo, with Metroid Prime 2: Echoes – a WORLD exclusive, or so I've been told and that's not to be sniffed at. This will be an interesting one because how could they possibly make it look any nicer than it did already. Nintendo is never to be underestimated, so I'll be there to check it out and of course bring you the news.

Pro Evolution 4 is getting an exclusive unveiling at Gamestars Live. Now, I know you don't understand proper football (you know the one where you use your feet), but I cannot overstate how much the rest of the gaming world wants this game. Stepping over dead grandmothers and giving their right arm wouldn't be out of the question. I think the scrum to get on a Pro Evo 4 pod will rival the Halo 2 queue in terms of grim determination.

One last exclusive is Sid Meier's Pirates. Now, I had to do some research for this one and I've since discovered that Sid and his Pirates have quite a following. Unfortunately I missed the first 1987 incarnation, but a pirate game sounds good to me, so I might just go and check this out.

These are just the highlights, but Gamestars Live has buckets more gaming fun to offer. From Tony Hawk's Underground 2 to more dancing and singing shenanigans from Konami and even a bit of sauce from Ubisoft with Playboy: The Mansion.

Of course the name we really want to hear is Grand Theft Auto. I mean, give me a break, can they really deny us!? Can they!?

I also want to get my hands on Fable – come on Peter, give the people what they want, just this once!

And I'm going to say Pikmin 2, even though I'm probably boring the pants off you, but I like it, so there.

Then there's one more element that always seems to escape the London shows and that's original titles. I want to see this year's Viewtiful Joe or Ico, but alas and alack, games like these are not considered good fodder for consumer shows. No, it must be sequels to sequels of prequels of sequels

Try as I might, I can't really complain – Halo 2

Most played: Champions of Norrath