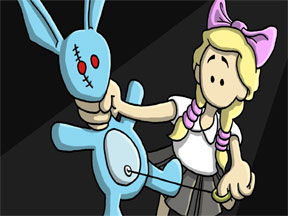 With an impressive resume of point and click adventure game reviews under my belt, I got the opportunity to review Edna & Harvey: Harvey’s New Eyes. I started the new game and was instantly impressed with the opening credits. It had a sort off movie-like feel and a great audio track behind it that kept me interested despite it just being people’s names.

After the credits, the graphics retreated to a storybook style artwork. I was a little hesitant on the art style, but it was really well done, and eventually grew on me. In fact, I grew to like the bright vivid colors of the world.

The story follows a young girl in a Catholic Parrish as she says not a word, yet is constantly berated by the head mother. I mean this kind of verbal beat down is worthy of an episode of Dr. Phil, yet the little girl kept doing her chores.

Narration followed the barrage of insults and I nearly tuned out the male voice. I’m used to the normal sleep-inducing droll of a narration. Instead, I almost cried laughing from the dark, cynical humor of the introduction. This dark humor lasted throughout the entire game and really gives Harvey’s New Eyes a unique feel to it.

With game of the year coming up, Harvey’s New Eyes should not be overlooked.

The story is intriguing and grabs you without letting go. The only time I was able to pry myself from my computer was for food and a restroom break. I don’t think I remember another game being quite this engaging.

As we all know though, gameplay makes the difference. No matter how funny the commentary or great the graphics, bad gameplay can break a game. But hang on, because Harvey’s New Eyes is easy to pick up, and there were no issues. Hours melted away as I solved puzzle upon puzzle, only to be treated to more of the excellent story told in the snarky style that made the game so addicting.

Audio in this game is second to none. The music was top notch and the voice acting was some of the best I’ve heard in quite sometime. Whoever Daedalic Entertainment has working for them, make sure they stick around for future titles.

Overall, Harvey’s New Eyes is game of the year material. Point and click adventure games now have a leader to follow and learn from, and probably mimic.

This is the first PC game to ever receive a perfect score from me. Five out of five GiN Gems is as high as I’m allowed to go. Get Edna & Harvey: Harvey’s New Eyes to guarantee an interesting experience.