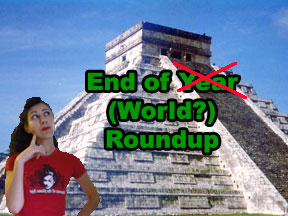 Before the world ends on Friday night, I thought we’d take a look at the last 12 months of gaming. I mean, I’d hate to die not having shared my gaming highlights of 2012. In another tough economic year, gamers have had some stellar titles to see them through, and I’ve been with you every step of the way.

So here are some of the memorable games and moments of 2012.

My gaming year started, as always, with a slice of Mass Effect. My all-time favorite series came to a close the spring, but what a way to finish. Not only was it the most awesome game of the series, but Mass Effect 3 also hit the headlines when disgruntled fans demanded an alternative to ‘that ending’. When a series is this consistently good, the ending is never going to please all the gamers, all of the time. The fact is, something went awry with ME3, but even that couldn’t alter the fact that my narrative gaming threads, played over five years came together. Now, that is a feat in itself and nothing can take away from the fact that this was an amazing finale to an amazing series.

Journey was a released on PSN in March and gave us a glimpse of a different kind of gaming. This game isn’t about being a gun-wielding badass. You don’t have to save the universe. You just wander through the desert. Sometimes you meet another player. You can’t speak to them, so you may never interact or you may become friends, but then you go your separate ways and the journey continues. Journey is simply one of the best reasons to own a PlayStation 3.

Following swiftly on from Journey, The Unfinished Swan is the second reason to own a PS3. This quirky little title gives you a brilliant white world and by throwing black paint around the environment, you reveal steps, edges of building, doorways and even ponds and animals. It’s like a paintball fairy tale world. The Unfinished Swan is an ingenious little puzzle game and proof that Sony is king, when it comes to taking risks on creativity and innovation.

Now this is a rare thing: a new IP. Bethesda may just sneak off with Game of the Year at the GiN awards for the second year running, thanks to Dishonored. This game offered a rich world and even richer open-ended gameplay. Take one mission, add a multitude of ways to complete it, using a smorgasbord board of toys and powers and you’ve got an idea of how Dishonored rolls. It looked gorgeous and it was just plain fun, making it a standout game in 2012.

My year finished on Halo 4 and what a way to go out. This was a long overdue series reboot that brought us back to everything that was great about the original game, but added something new. Halo’s never looked so good and the story’s never been so emotional. A welcome return to one of my favourite series and a fitting end to the year.

Also in the headlines:

Quarter 4 on the release schedule was on fire in 2012, with the likes of Borderlands 2 and Far Cry 3 bursting onto the scene. Both delivered rich environments, lots of gung ho adventure and quality gaming, but each offering a very different tone. Whether you go for the irreverent humour of Borderlands 2 or the when-holidays-go-wrong psycho on a tropical island tension of Far Cry 3, you won’t be disappointed.

2012 was the year of the Kickstarter project. According to figures on the Kickstarter blog, by September this year, over $50 million had been pledged to games projects. That’s almost 100 times more, compared to 2010, making games the most funded sector on Kickstarter, with films taking the number two slot on $42 million. Notably, it wasn’t just no-name nobodies holding out the begging bowl. Gaming luminaries including Charles Cecil, David Braben and even the development megastar, Peter Molyneux signed up to Kickstarter to fund their latest projects and give them more creative freedom. Now we just have to wait and see if these games ever see the light of day.

If we’re going to discuss the good, the bad and the ugly, then we mustn’t forget Anita Sarkeesian’s Kickstarter project, which raised a storm when she dared to mention feminism and games in the same sentence. The vocal minority hounded her with misogynist, racist and frankly scary attacks online. Thankfully, the voice of reason ruled and she more than reached her target.

Women had a rough ride throughout the year, with various internet trolling incidents, which showed the ugly face of the gaming community. And then there was Lara Croft in rape-gate, which saw a backlash against the alleged rape of Lara, in the next Tomb Raider.

The Lara debacle was followed by ‘that’ Hitman trailer. Somehow SquareEnix failed to see that the slow-motion murder of latex-clad nuns would raise an eyebrow or two. And then they did it again by creating a Hitman promo game that encouraged people to send each other messages deriding the size of their genitals and breasts. When will SquareEnix learn?

And the women in games year was finished off by another public outcry, when Irrational chose not to use the female lead on the cover of the new Bioshock game. The reason? Because women on covers kill sales ‘ apparently. On the flipside, Naughty Dog did put their female character on the cover of The Last of Us, despite pressure to put her on the back of the box. So I’m raising a glass of mulled wine to Naughty Dog ‘ the women’s champion.

I also need to raise a glass to City of Heroes, which died this year, when NCsoft pulled the plug. In addition, GAME, the UK’s leading games retailer became a victim of the recession. Fortunately, it has been resurrected, but its sister company, Gamestation (the gamer’s brand) was sacrificed to save GAME. The good news is, at least we still have a dedicated games retailer on UK high streets.

Many of the games I was http://www.gameindustry.com/editorial/item.asp?id=583 "class="yellow"> looking forward to, have been pushed to next year, which is no bad thing. Of course, we all expected some new hardware announcements this year, but Sony and Microsoft are still trying to squeeze every last bit out of this generation and who can blame them when games are looking as good as Halo 4.

The year 2013 looks set to be the gateway to the next generation of consoles. With so many new distribution and funding channels, I’m hoping we can expect more creativity and a shift in focus from the bloated AAA sequels.

Wishing you all a merry Christmas and see you in the New Year.

Most wanted: The Last of Us