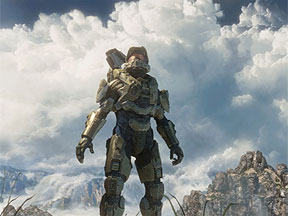 Developer 343 Industries had a challenge on their hands when they took over Bungie’s baby. Halo fired up with the first Xbox, back in 2001, and took the world by storm. Over 10 years down the line, it’s a series fans know well, and others may think is past its sell-by date. Stray too far from the path and 343 could lose Halo fans, but if they don’t do anything new, gamers could overlook it as a piece of mere imitation of a game that’s no longer relevant. Halo 4 had a careful balance to strike, and on the whole, it succeeds.

Caring for the Environment

My first impressions of Halo 4 are that the series has never looked so gorgeous. The colors are lush and crisp. Dust motes hang in the air as Master Chief steps out into vast, alien landscapes, reminiscent of a progressive rock album cover. Huge shards of alien structures jut into the sky or disappear into deep ravines as light catches the mist from a waterfall. We’re also treated to forests and jungles dripping with moisture. Remember when we spent the first five minutes of the original Halo just looking at the grass and water? Well, those days are back.

And the visual delights aren’t just for outdoor environments. Gone are the bland interiors of the original games. Halo 4’s missions take place on ships with interlacing platforms that shift, providing a sense of unease. Levels are linked by hard light bridges and corridors open out into huge multi-layered chambers.

Despite the makeover, this game is unmistakably Halo. From Master Chief’s floaty jump to the return of our old foes, the Covenant, all is as it should be. For fans of the series, it will feel like a homecoming, and for newcomers it’s a great entry point to see what all the fuss is about.

In with the New

Whilst it all feels very Halo, 343 Industries has made its mark on the Halo universe, in the shape of the Prometheans. This is the new enemy and they certainly bring a much-needed breath of fresh air. It’s not clear whether they are organic underneath all the metal armor, but they come in three guises.

The Crawler is a sort of guard dog which runs on all fours, has a laser gun for a face and can crawl up walls. They get sent in as cannon fodder, but can pack a punch if you get surrounded.

The Knight is a bi-pedal metal giant which can teleport itself out of trouble and fires a laser weapon that can deal some serious damage. They are protected by flying drones called Watchers, so this formidable trio need some tactics to defeat.

On the upside, the Prometheans drop a range of new and interesting weapons, which generally follow the usual assault rifle, shotgun, beam weapon and pistol format. However, a couple of them offer some interesting benefits and prove particularly useful against the Covenant, so they are worth investigating.

Halo 4 also offers some optional extras in the form of powers you can pick up along the way. These include a floating security drone, which offers firepower support and can take some of the flack in a battle. There’s also a hard light shield, which can be handy for crossing open areas. Then there’s the jet pack, which is just cool and makes travel a bit quicker.

The Halo with a Heart

The core gameplay in Halo 4 remains largely unchanged from the rest of the series, but this game does bring us something new, and it’s all down to the story. We still have the usual epic, save-the-universe-from-a-cosmic-evil style narrative and you can pretty much take it with a pinch of salt, as usual. But 343 has taken a brave step and given Halo 4 a heart. Ironically, the human pulse beating through Halo 4 is Cortana, the AI.

After five years floating through space with Master Chief, Cortana is suffering from rampancy, which is like AI dementia. She’s losing her mind and Master Chief has to get back to Earth before he loses her for good.

Jen Taylor does a star turn as the voice of Cortana, who slips slowly into madness as the game progresses. The script is brilliant and handles what could so easily turn into melodrama with a skilful lightness of touch. Master Chief remains stoic throughout, but we know that he cares and at last something personal is at stake, rather than just the universe, again.

The opening scene sets the tone of Halo 4 and I have to say, it’s the most intriguing intro I’ve ever seen to this series. From the very first line, I knew that this was a familiar game treading new ground and doing it really well.

When it comes to the missions, 343 does mix it up to keep things interesting, but there are no classic set pieces to rival the likes of The Silent Cartographer. That said, I never found the missions dull or entirely repetitive. There’s enough new stuff to keep you interested and the sheer quality of the game makes it a ride worth being on. It’s worth noting that the single player campaign is fairly short, so maybe the lack of big moments could have been wearing on a longer game.

My only misgiving is that the missions do tend to follow a pattern. You’re often required to do something along the line of press three buttons in order to raise shields, and this must be done three times in three different towers or you must disable three power sources to progress. It’s a small gripe, but it does highlight the lack of standout moments.

I think 343 have played a clever hand with Halo 4. They’ve played it safe and that was exactly the right way to go. By dishing up all the familiar elements that make Halo great, they’ve won over the fans. I mean, if it ain’t broke, right? But not content with that, they’ve taken a chance and given us a poignant story to drive us forward. We’ve got a new enemy to fight with new strategies to beat, so this is no cheap imitation of a Bungie game.

The torch has been passed and we can rest assured that Halo is in safe hands. I think Halo 4 is a taste of bigger and better things to come. Now that 343 has got us all back aboard the Halo train, they can go all out with Halo 5 and give us one hell of a ride. That said, Halo 4 is more than just a bit of filler. It’s a satisfying successor without being a dramatic reboot. This is classic Halo with a fresh twist and all I can say is, it’s great to be back.