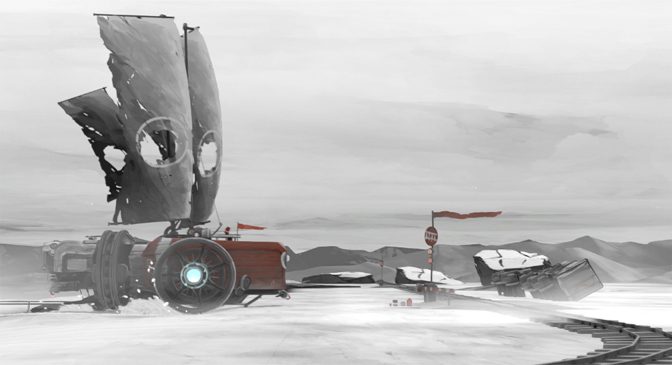 FAR: Lone Sails is a masterpiece in minimalist storytelling through videogames. I would also hold it up as an example of video games as art, though that might be a bit pretentious for this amusing little game. FAR: Lone Sails began life on the PC with its release on Steam, and then moved to the PlayStation 4 and Xbox One. Recently it sailed onto the Nintendo Switch, so regardless of where and how you play your games, you can probably find a copy. And you totally should.

Both the gameplay and the storytelling are deceptively simple. You play a little person in red overcoat with a big hat. We never directly learn more about the main character, or if they are even a man or a woman, a boy or a girl. You first find them standing at a gravesite decorated with little red pinwheels, with a seemingly bleak landscape spreading out in all directions. It is here that you learn the controls of the game, which are basically just moving left and right, and jumping. You can also pick things up and later drop them using the same key. So four keys is your complete control scheme. 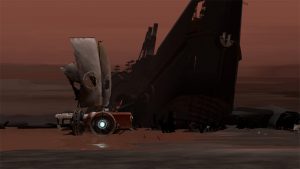 The game actually doesn’t tell you what to do, but you can only go in one direction at first, so you will probably head that way eventually after paying your respects to whoever is buried there in the first scene. I actually suspect that the main character has something to do with a major titan of industry in this world, because much later on you will find a museum dedicated to them with what I think is a second gravesite. That site is also decorated with red pinwheels, which is why I think they are connected somehow. I suppose it could be that the people of this world put them on every grave, but it seems more likely that the two graves are related somehow, and that ties back to your character.

After leaving the gravesite, you will explore a small house, which also has clues about the world and your character, and then head to the beach outside. Broken and beached rowboats suggest that there used to be water there, but it’s just a dry plain now. The ocean must have been destroyed by whatever apocalypse claimed the lives of seemingly everyone else in your homeland. 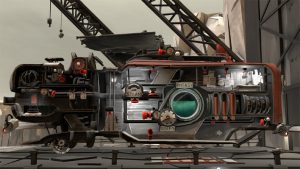 It is here that you will find the most amazing machine, a massive cross between a locomotive and a sailing ship. It’s so huge that it even has an elevator to take you up to the top floor, where you have a small cabin, or to the roof where you will eventually have an alternative method of driving the beast forward. Your craft is both simple and highly advanced. For one, you can convert matter into energy. Once the energy reserves are filled, the craft uses steam to slowly turn its massive wheels, and lumber you forward. 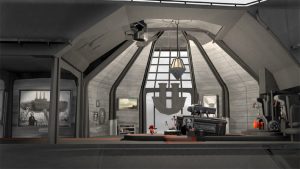 One wonders if the machine is meant for a larger crew, or if perhaps your machine is more homemade than the production models (which you will see pictures of later in the game). Driving the machine requires quite a bit of running around. First you have to push a plug to engage the drive, then carefully release the steam before it builds up to high. Then you have to run back and put more matter into the energy converter, which is positioned on a higher level than the drive, and race back because that plug that keeps things running always starts to pop back out after a short period of time. And you do need to maintain your speed, because while your vehicle does well on straight paths or downhills, its slow as molasses in January if you need to build momentum while pushing up hill, and burns through a lot more energy. 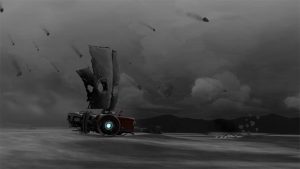 Simply keeping your locomotive home moving is just part of the challenge. You will probably need to stop to pick up salvage you see along the way so you don’t run out of matter for your hungry engine. The brake to stop the craft is near the drive engagement plug, but you do need to jump up to get to it, another odd design choice in this strange vehicle. You will also be stopped by things like blocked roads or barriers. Some of the smaller ones can be smashed into matchsticks by your heavy vehicle, but others will violently halt your journey if you smash into them at speed. 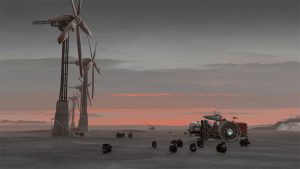 The barriers serve as a sort of puzzle, and often require you to leave the vehicle behind to try and sort things out and clear the path. None of these puzzle barriers are overly difficult to solve, and many offer insights about the people who lived and worked in this world before whatever force took them away. You never find any bodies either, so its possible that they all just up and left for whatever reason. You will run into quite a few of these barriers, as it’s sort of a mechanic the game uses to transition between different zones.

Other hazards include environmental ones, such as lighting or very hard hail. Your sturdy home can protect you from most things, but the weather is so bad that it will occasionally damage your vehicle. Thankfully, you are provided with a firehose to put out fires, and eventually a repair torch to fix damaged components. 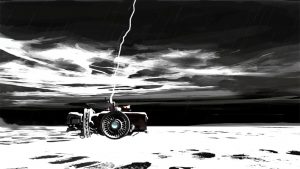 In addition to constantly trying to move forward to your unknown destination, you can also upgrade your vehicle along the way. Eventually you can add a vacuum attachment to pick up matter for the engines without stopping, and better tires to increase efficiency. And in one of the most useful upgrades, you get sails that when deployed can move your massive tank forward without tapping into your precious energy reserves, but only when the wind is right, and only when there are not overhanging hazards that might damage your sails. 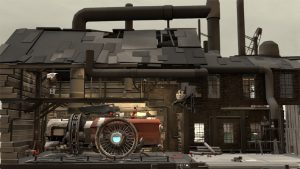 You can get to your finial destination in about three hours of gameplay, which is how long it took me the first time. Subsequent journeys will go a lot faster since you will already know how to handle the puzzles. You can even earn a trophy on most platforms for doing a FAR: Lone Sails speed run.

For me, time melted away while playing FAR: Lone Sails. It’s a game with a surprising amount of depth, masquerading in a package that really doesn’t seem like that at all. It earns 4.5 GiN Gems for offering some unique gameplay and subtle storytelling, while also being a lot of fun to play.