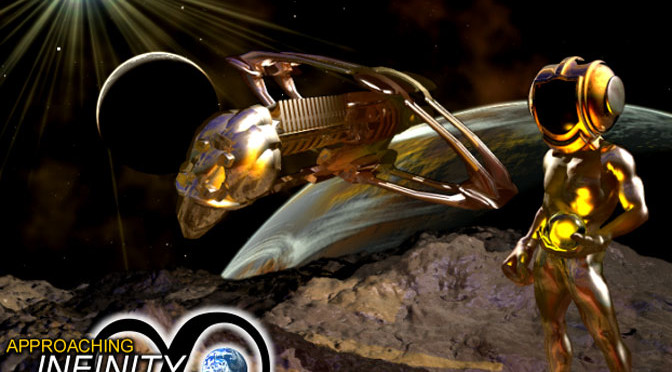 Approaching Infinity is quite a surprising find. It’s an indie game made by a small team of developers that punch far above their weight class. It’s being published now by Shrapnel Games and offers a lot of bang for the buck for players who really like exploration and sci-fi. It even has some unique elements that you can’t find anywhere else.

Approaching Infinity is a rogue-like game in that you and all the other elements (friends and enemies) move at the same time. If you want, you can sit still and plan out your next move and the universe will sit quietly and wait for you. That’s actually an incredible advantage for players patient enough to try and think their way out of bad situations. It’s also rogue-like because you don’t save as you go. While the game will auto save when you move into a new sector or set foot on a new planet, if your captain dies or your ship is destroyed (which would also kill the captain) then the game ends. You can’t go back and load up a previous game and have to start all over at that point. Some may feel that makes the game too difficult or frustrating to play, but it does add realism and excitement as each step could be your last – though probably not if you take your time.

The game is configured with the universe in sectors. You start at the first one and explore space in whatever ship you have configured at the beginning of the game. You will have also configured your captain too, and equipped him or her from a variety of skills that may come in handy as you explore.

On the main space map you will find planets, asteroids, space stations, anomalies, ship wrecks, space stations and a warp point that leads to the next sector. You may also find hostile aliens that will attack you. Combat is done by clicking on your enemy, which will make your ship fire all equipped weapons that are in range. You can fire again once the weapons recharge. Shields and armor that you install can negate the damage from incoming fire, and it’s a good idea to spend money on the best gear for your ship as soon as you can, though you can also find pretty good stuff around the universe by exploring every dark planet you come across – not that doing so doesn’t involve its own risks.

Planets, ship wrecks and a few other areas on the space map can be landed on and explored by your crew. The away-team missions follow the same format as when zooming around in space, only your team is protected by space suit armor and uses personal weapons like rifles or swords to defend themselves. Your captain can choose to go on a mission with your away team, and some missions require this, but given that getting the captain killed ends the game, you will probably want to keep him on the ship most of the time. You can hire up to six officers for your vessel, some of which have space-based skills while others are more planetary combat oriented, so you don’t have to risk your captain all the time, especially if you hire crew members more suitable for away team missions.

Sectors in space are controlled by various factions and most of them will give you quests that can be fulfilled for rewards like good gear or credits. Many of these quests will take place in other sectors, meaning that you have to return to get your reward, or find a new sector controlled by the same race or faction. Some factions will begin as hostile to players too, though hiring an officer with a diplomacy skill can go a long way to cooling things down. If you can find one, or have a starting captain with that skill, it can be very helpful. The more negative your reputation with a faction, the more likely they are to do things like attack you on sight.

Technically, Approaching Infinity can go on forever. There is no upper limit to how many sectors you can uncover or how much of the universe you can explore. However, each race and faction has an “end game” quest that you can take on where if successfully completed, will result in a winning ending if you are looking for a victory condition. These end quests are quite long and involve many stages and missions. If you don’t go on one, you can just keep playing, gaining new gear, getting new quests and generally increasing in power forever. Your officers also gain experience over time which can be used to make them better at their existing jobs, or to get them new skills. You can also buy entirely new ships with different capabilities, and unlock exotic spaceships along the way as well.

One unique feature in the game is called Pay It Forward. When you visit the Pay It Forward vendor at a space station, you can take a portion of the money you have earned in the current game and bank it for use in the future. When you start a new game, you have access to all the Pay It Forward money you squirreled away the last time, minus a small vendor fee of course. This way a wildly successful run can help to bankroll a new starting crew later on, or provide a nest egg so you are not totally back at square one should your captain get turned into radioactive goo by some blob monster on a distant planet – something that happens from time to time.

The graphics are simple, a small step above ASCII based, but work well for the game. Everything is easily recognizable as what it’s supposed to be. You won’t confuse a blob monster for a stack of gems or a space zombie (which are total badasses) for a computer terminal.

The game has a unique soundtrack created by Nathan Becker, aka ectogemia, who has worked on many games before. It resides in the background and sounds very sci-fi and appropriate for the game at hand. You can lower the volume or disable the soundtrack if you want, but it’s good and really helps with the feel of the game. It’s a far cry from the generic music we normally get with indie titles like this and ends up being quite an asset for Approaching Infinity.

On the negative side, there is a lot going on with the game and I could see players getting frustrated trying to figure it all out. Literally every key on the keyboard is used to do something on your ship or open up some menu. There is also a big crafting component that the game does a poor job of explaining, meaning players will be forced into some trial and error just to figure things out. It doesn’t help that the crafting process itself is trial and error based, though once you know what you are doing, it’s at least functional.

For those who love to explore, Approaching Infinity is quite a game. There are an unlimited number of little nooks and crannies in the universe each time, and they are often filled with artifacts and items. You never know what you might find on forbidden planets or drifting in dark shipwrecks waiting to be discovered. Some of those artifacts are humorous, like little messages left by those who apparently went before. Some of it is in code or has unknown properties, leaving you to decipher its meaning and function. And some of what you find is just primo gear that can give your little ship a serious edge in the struggle for survival.

Beyond just being a lot of fun to play, the game is also quite fair. I’ve played many rogue-like games that just became too difficult to play, almost like the developers wanted or expected players to fail at some point. Approaching Infinity is cool because it slowly ramps up the difficulty, always allowing careful players to stay ahead of the game. By using the right device, weapon or crew skill at the right time, almost every situation can be overcome in one way or another, even if the solution is to run away very fast. The Pay It Forward option also adds yet another element tilting difficulty in favor of the player just a bit. And it’s nice to have optional end-game quests in the mix as well in case anyone is looking for an appropriate fate for their beloved crew other than being lost in space.

Approaching Infinity is on sale for $40 as of this writing. That may seem a little high for an indie title, but in this case I think it’s worth it. Especially given that the gameplay is both fun and unlimited, and just as likely to be as fun today as it will be ten years from now. If you are an explorer type of gamer, book your ticket to infinity now. I think you’ll enjoy the journey.