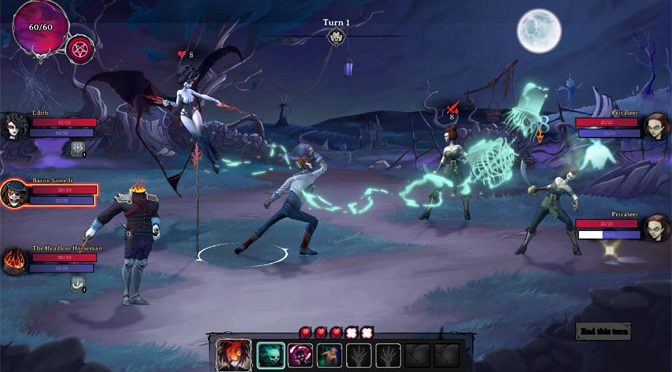 It’s always great to see what games come out around October every year. While many are just your normal shooters, RPGs and adventures, a few developers take advantage of the Halloween season to release something just a little bit spooky. Rogue Lords falls into that category.

The plot of the game is both unique and interesting. You play as the Devil himself, and the disciples that you field in the game are a collection of some of the most evil people and entities who ever existed. They include famous villains like Dracula, the Headless Horseman and Doctor Frankenstein alongside others that borrow characteristics from well-known villain stories like Bloody Mary, The White Lady and Lilith the succubus. That said, the game’s atmosphere is cartoon-like and even snarky, with The Devil acting as a sort of comical relief character commenting on things happening in the game as you play. 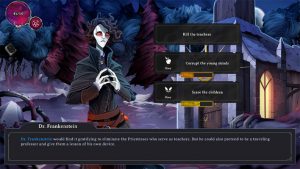 The developers really nailed the atmosphere for Rogue Lords. It’s spooky, but not in a frightening way. All the characters are cartoon-like. And while the world is draped in traditionally scary stuff like dismal swamps, tall weeping willows and deserted forest paths, it’s just background. Think about Torchlight in terms of graphical flavor instead of Diablo. In a way the graphics and world design for Rogue Lords is almost a parody of spooky games, and that fits in great with the overall atmosphere.

With Rogue right in the name, you probably figured that this was one of those no-save adventures where you can’t retrace your steps to redo choices, and one mistake can end your run. And you would be right. If you have played other rogue type games like FTL or Crying Suns, then you have a pretty good idea of what to expect in terms of the rules of the road.

The various chapters that you play in Rouge Lords are divided up into books, with each one representing The Devil’s quest to try and obtain a different and powerful artifact that was stolen from him. Each book can take hours to play, and if you end up losing at any point, you have to start all over again from the start. Only by completing a full book can you actually move on to the next one. 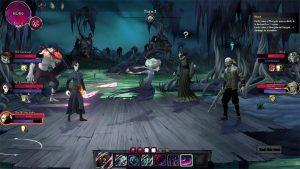 Gameplay generally consists of moving your disciples across the map, and you have up to three choices about which path to take. The paths re-converge often at key points so that major boss battles and key story elements that are critical to the book you are playing can’t be skipped. There are several possible encounters at each stop along the path, and you will be able to see the overall type of encounter you will be facing before you make your choice. Possible encounters include tactical battles where you can win a haul of souls which are used as currency, visiting the Grim Reaper who acts as the game’s store keeper for new skills and artifacts, a well where you can replenish the Devil’s strength, an altar where you can sacrifice a disciple’s skill in return for opening up a new skill slot, a difficult battle where you are awarded an artifact if you win or a story choice where you will use your disciples skills to try and reap a reward or shift the game world a bit more towards evil. There is also a random event icon where you don’t know what will happen if you choose to encounter it. 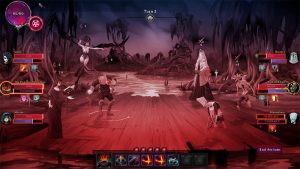 Beyond just the map and the story elements, the majority of play time in Rogue Lords will be spent fighting in tactical battles. Your disciples have action points assigned to them each turn, and they have to spend those points to perform a skill or launch an attack. At first you only have five action points, and skills mostly cost between two and three points to use, so you won’t get a lot of action in every turn. As you improve your skills, they generally get more powerful and cost less action points to use, so leveling up the combat skills that you find most helpful is critical to getting through a book. 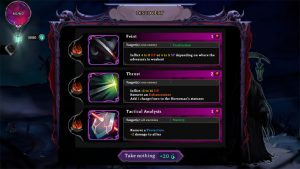 Your characters and most enemies have both a health bar and a spirit bar. You can drain either one on your enemies to take them out of the fight, and different characters specialize in doing one type of damage or the other. This means that a balanced party is pretty important, because some enemies have a lot of heath but low spirit, and some are just the opposite. So hitting them where they are weakest is a key to ending fights quickly.

If one of your disciples takes critical damage that would reduce them to zero hit points, they don’t die. Instead points are taken away from the devil’s power. If your devil power is drained to zero, the run ends. 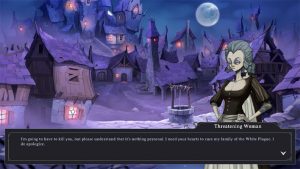 In addition to being your overall hit points, your devil power is used to cheat in the game, which is a really cool and unique addition that I have not seen before. By spending your life essence, you can perform some major rule-breaking moves. For example, you could cheat so that you automatically win a story element challenge. You can drain an enemy’s hit points to zero right before your disciples strike. You can heal your team. You can even remove negative statues put on your disciples and toss them back over to your opponents. Or you might use that power on the map screen, opening up portals that let you skip encounters that you don’t like, or getting to ones that you really need, like visiting the Grim Reaper.

This cheating mechanic is amazingly fun, but it comes at a huge risk, because you are basically draining your hit points to perform that magic. If you lose all your devil juice, your run will end. So if you cheat too much, then you likely wont have enough when it’s really needed. So as tempting as it is, cheat sparingly. 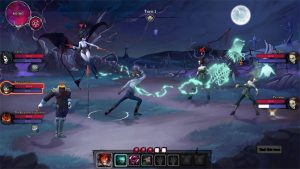 So it sounds like Rogue Lords is a slam dunk for your spooky Halloween fun? Unfortunately, there is a huge negative to the game that will prevent it from really being a lot of fun for a majority of players. It’s punishingly difficult and arguably both unfair and unbalanced. There are certain encounters that are outright game killers, even in the very first book. Unless you have a very specific build and get really, really lucky with what skills or artifacts you come across, there are points that will spell game over for you almost every time. The comments on Steam are filled with hundreds of people complaining about the difficulty. And while there are also a large number of hardcore players telling others to “get good,” it’s clear that Rogue Lords was not designed with most players, and especially casual gamers, in mind. 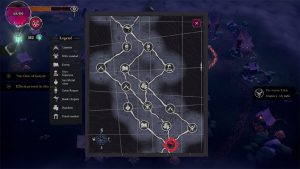 The difficulty problems are exacerbated by the fact that runs can take hours, and if you get killed, then almost all of your progress is reset. Yes, you might unlock new potential artifacts in the game, but you wont start with them. You might find them on your next playthrough, or you might not. You can’t even configure your characters with the skills you want to use in your run. Instead, their starting skills are assigned to you, which can be a recipe for failure. This can be maddeningly frustrating, especially if you run into one of those aforementioned “impossible” encounters. If there were difficulty settings in Rogue Lords, players might be able to compensate, but right now you either play the hardcore game the way it is or move on to another title. Unfortunately, it seems like many gamers will move on, or simply not pick up Rogue Lords to begin with. 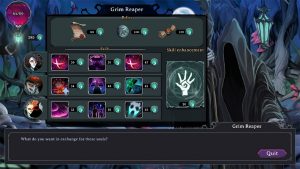 So far the developers have said that they are listening to players, but I have not seen any movement in terms of game balancing or adding what is really needed, which are difficulty settings. Adding a difficulty slider would let hardcore players keep enjoying the game however they want, even making things harder if they choose, but then it would also open up this delightfully diabolical title so that everyone can enjoy it.

As it stands right now, if you are a more casual gamer or even just a normal, non-hardcore player, you probably want to keep away from Rogue Lords despite how highly it scores in most other areas. Hopefully the developers will rectify that soon, because there really is a very slick title hiding under all that overly-challenging difficulty.