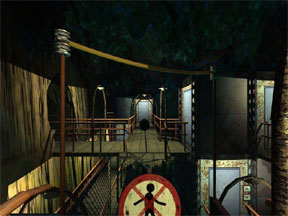 Return to the mysterious land of RHEM with a sequel written in the same spirit as the original. Like its predecessor, RHEM 2 is chock full of extremely challenging puzzles and is entertaining to experience as well.

In the original (which we reviewed here), after entering the land of RHEM by train and solving the presented puzzles, you deliver a letter – which was the final goal – written by Kales to his brother Zetais (imagine going through elementary school with a name like ‘Zetais.’) RHEM 2 literally takes place right after you made the delivery – it doesn’t even look like you left his porch before he opens his door again, gives you the first piece of a key that you will need, and sends you on your way. Then you start your train ride from what appears to be the surface section that you had explored in the original RHEM into a tunnel. After some twists and turns you come into a cavern, are lowered by a lift, and eventually come to a stop.

Getting out, you see that the train will need to be lifted again before it can go on. Climbing into a nearby building, one of the first things you see is a video screen. Pressing the button (because, what adventurous puzzle solver _doesn’t_ press every button?) reveals a message from Kales who says he has left, but as he was unable to obtain the third piece of the key and after that a carved disk which he feels is important, he hid the second part that he did find, and then just moved on leaving good ol’ you to solve things for him.

Unfortunately, you can’t leave until you lift the rail car, and you can’t lift the rail car without getting a picture of the disk, because your buddy Kales rigged it that way (he’s like that). He also didn’t make it easy for you to find the second piece, so you will have to get to work.

The interface of RHEM 2 is the classic first-person point-and-click slide show. Although this form has been around since the days of Myst, it never seems to get old, especially since newer versions of media such as QuickTime allow animation to be inserted quite seamlessly in amongst the slides. This method of interface is by far the most accessible, requiring minimal levels of manual dexterity to interact with the game.

For those that may be unfamiliar with the concept, a slide show interface shows you a picture (in RHEM 2 a well-drawn 3d-modeled picture) of the seen you are facing, and you click in various parts of the screen to turn one way or the other, go forward, pick up an inventory item, or use a device that is pictured. The cursor changes to tell you which of these actions is possible in various places on the screen.

The puzzles are some of the most challenging ones ever put into a computer game. You have to collect data from all over your environment before you can even hope to solve anything, then you have to figure out what information goes with what puzzle, and how that information is used. You will need to make copious notes in order to keep things straight – by the time I got done, the five or so sheets of paper I used started to look like something out of "A Beautiful Mind."

The skillset you will need to solve RHEM 2 goes a bit beyond what most puzzle/adventure games require. Of course, to start you will need the typical logic and deduction abilities. But you also need to know the basics of electrical circuits (essentially how to complete a circuit), the number of degrees in an angle by looking at it (within 45 degrees, so it’s not impossible), and mathematics. And I’m not talking basic knowing your numbers/power of elimination/Sudoku-level of math. You will need to dust off your basic algebra skills to convert measurements between different scales, and to solve actual honest-to-God equations. These equations include such things as square and cube powers, as well as square roots. But really, only the one puzzle has the hard stuff, and you should thank your lucky stars they didn’t put in any sines or cosines. I might have suggested a big red label on the box "WARNING: Contains Mathematics," but I have no doubt that would hurt sales.

The graphical environment is quite breathtaking at times, but up close some of the surface textures appear a little bit cartoony. But this is easily overlooked in light of the fantastic views that you get to look upon throughout the game. The live action shots integrated into the computer-drawn backgrounds are a little choppy, but there are not many times when this is used, and they were smart and put the people either behind a window or in a monitor screen, minimizing the changes to the background.

Sound is very important in this game, so it is a good thing that the sounds are well-constructed. The sounds make it so it is easy to tell if pressing a button does anything or not. Usually when pressing a button yields nothing, a particular buzzing tone is played, so there is no mistake that something needs to be corrected before that button will do what it is supposed to. The incidental music is pleasant and unobtrusive, but you definitely don’t want anything harsh or overly emotive when you are trying to solve a puzzle.

Just as the original alluded to a sequel, so does RHEM 2 at the end. I hope I don’t have to wait another two years, but if it takes that long for Mr. Mueller to put together something this good, I will wait (although impatiently).

RHEM 2 is a fantastic accumulation of intensely challenging puzzles, every bit as impressive as its prequel. It will give you hours of enjoyment at a great price. It quite easily earns 4 GiN Gems.