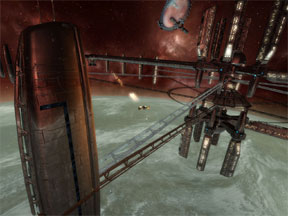 "X3: Reunion" promises to take space simulation to the next level as this much anticipated sequel of the "X" series gets ready to hit store shelves in the next few days. Much to our delight here at GiN, we have been fortunate enough to get our hands on the gold copy of this hot title and let me tell you that, thus far, X3 is not looking to disappoint.

For starters the game is visually stunning all the way around, continuing the graphical legacy of its predecessors and breaking new ground in the process. The X3: Reunion engine uses the very latest DirectX 9 technology to help churn out some serious 3D visuals. A 2.0 version pixel shader helps to create realistic reflections across a variety of surface types, while bump maps and specula maps add detail to geometry of objects. The result is a game where adjectives like "wildly imaginative" or "deeply immersive" hold a much more concrete meaning.

X3 continues the series trademark "open-ended" game play allowing players to shape the virtual universe around them by the actions or choices they make as they become familiar with their new surroundings. Players can devote much of their time exploring the universe and meeting new races, take on new business opportunities to improve their financial stature, seek out galactic battles to fight, or even command a huge fleet of warships. Whatever you’re fancy, there is something in this ultra-realistic universe for every sci-fi fan to embark upon.

Despite X3: Reunion’s limitless game play design, there is an underlining story plot, as before in the past, that players can play out if they choose to do so. X3 pretty much picks up where "X2: The Threat" left off. The harsh repercussions of an enemy invasion have the entire galaxy in disarray. The main character’s father is trapped in a coma, and his best friend is dead. He will try to seek out an explanation for this surprise invasion and eventually take a journey with his father to uncover an ultimate prize.

Egosoft has also been working diligently behind the scenes to reconstruct a faster, more user friendly interface for the game as well. In past versions of the "X" series the interface has always been more keyboard driven. This year’s version has been drastically changed to be more mouse-driven, making it much easier and quicker to navigate. All of the controls can be fully reconfigured to your own personal user settings, making those otherwise somewhat complicated tasks such as ship navigation and everyday business operations much easier to learn and master.

This same very user interface has helped in building the bridge from PC platform to console platform. A first for the series, X3:Reunion will also be making its debut on the Xbox platform this fall giving console gamers something new and exciting to talk about. It will be quite interesting to see whether the Xbox will be able to churn out the same super sharp visuals as seen on the PC. One thing is for sure. Egosoft seems to believe it can be done.

The bottom line is that if the early first impressions hold true, X3: Reunion will rock the PC community off their chairs when it hit’s the store shelves in full force this November.

Incredibly stunning and ultra realistic visuals, an advanced role-playing system, a new user-friendly interface, and the hint of a strong compelling storyline all indicate the potential for a sleeper hit down the road. Only time will tell. Until then, stay glued to your chairs for future updates and prepare to embark on the sci-fi adventure of a lifetime.