When Weappy Studios came out with their excellent This is the Police game, and eventually the even better follow-up, This is the Police 2, it offered a pretty unique take on the typical police management simulation genre. In a lot of ways, This is the Police, especially the first game, was a lot like one of those 9-1-1 simulations where you have to dispatch the proper resources from a limited pool to successfully respond to different calls for help. The big difference was that on the backend, you were playing a crooked chief of police who was trying to raise enough money before retirement to live a comfortable life of luxury. 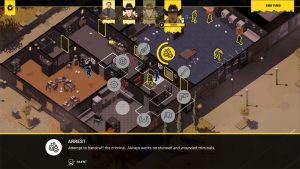 The sequel game, This is the Police 2, followed that same plotline, only you were the same crooked cop who was now on the run. So naturally, the thing to do would be to take over a rural police force and start your scams all over again. Don’t worry, the FBI will never find out. Most of the mechanics of the second game were essentially the same as before, only you had even fewer resources and less professional officers to work with, which was kind of funny.

Whereas the first game was basically an adventure and story-based title, the second added tactical combat. Unfortunately, it was missing a lot of the key elements that gamers have come to expect from tactical combat games like clear line of sight rules, height and terrain advantages or even rotatable maps. Many of the tactical combat levels were also brutally difficult as well as timed. I got though them and finished the game twice, but enjoyed the dispatching portion of the game and story elements a lot more than the stripped-down tactical combat that This is the Police 2 offered. 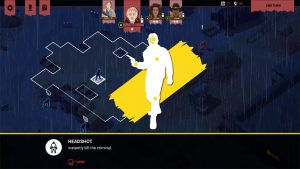 Fast forward to today, and we have a purely combat-oriented title set in the in the same world. Rebel Cops features the same rural setting as This is the Police 2, only you are in a different town where a mafia-like bad guy controls everything and your small police force has to do hit and run tactics to try and chip away at his empire. In gameplay terms, it means that most of the story elements have been eliminated in favor of a series of tactical combat missions. And in terms of difficulty, Rebel Cops is even more brutal and purposely unfair. It makes no bones about outnumbering your officers 20 to one on some missions while sticking you with subpar equipment and lackluster special abilities.

The difficulty factor would be fine, especially for gamers looking for a challenge, except for the fact that almost all of the flaws and shortcomings of the tactical combat elements of This is the Police 2 are present in Rebel Cops as well. We still don’t have defined lines of sight on enemies, so you never know if taking someone down near another person will trigger them to act or not. There are height levels in the game now, designated by having a transition square sitting on a staircase to show that you are traveling up or down when you walk over it. But there does not seem to be any advantage to taking the high ground. 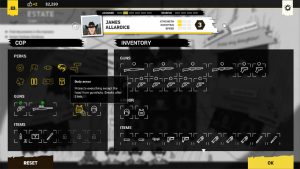 It’s also problematic that the map does not rotate. On one mission I needed to have my cops climb up a stairway to get to a balcony with a door on the second floor of a building. Only I couldn’t see the stairway or even the fact that it was a stairway because it was placed behind a building. I kept trying to get my cops to interact with the door, only they couldn’t because it was on the second level and they were on the ground. To me, it looked like they were level with the door and it was just not selectable. If I could have rotated the map, I might have seen the fire escape and figured out what was happening. 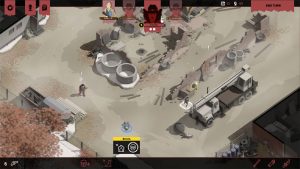 The combat in Rebel Cops reminds me of the fights I had in the original Jagged Alliance, where my mercenaries were wandering around on a 2D board. Your only advantage is going to be finding cover, which thankfully is well designated with either a half shield icon for partial cover or a full shield for complete coverage. You can still get hit when in cover, but not nearly as often. And that’s a good thing, because one hit can be fatal in Rebel Cops. If you get hit in the head, you will die right away. Body shots and hits to the arms or legs keep you alive for a while, and a buddy with a first aid kit can get you back in action. There are also armor pieces you can buy to help out, though they are expensive, in limited supply, and are destroyed once they take damage. But they will save your life. 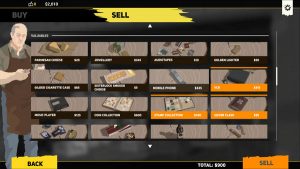 As with the previous game, cops have special abilities that you can unlock with experience. The number of special abilities from This is the Police seem stripped down a bit, and are also automatically assigned by the game. You do get to pick one (of two offered) each time you level up, supposedly chosen based on that cop’s play style. Leveling up your team is surprisingly easy given how huge the maps are and how many enemies you face. At the end of the second main mission in the game, I had arrested almost 50 bad guys I think. My main cops leveled all the way to maximum after that level and even my support characters went up quite a few levels. If you survive, you will level. 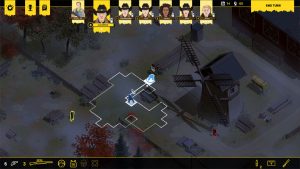 A really good thing about Rebel Cops is the fact that the maps for the most part are really huge, and contain multiple objectives. You can place different cops at different starting points, which puts them closer to their side mission objectives. However, in my experience it was better to keep your cops together as much as possible. You can’t always do that with timed objectives, but keeping your team together helps to negate the overwhelmingly unfavorable odds you will face. At least in a very small area, you can achieve parity with your enemy or even temporarily outnumber them. 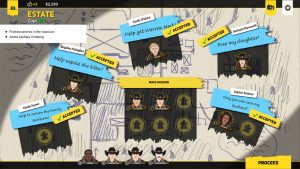 Another key to success will be acting stealthy. With one bullet kills, the smart player will maintain secrecy as long as possible. So if you can knock someone out with a baton and then arrest them quietly, their body will actually disappear from the map, and their buddies never notice they are gone. This is far better than shooting them dead and having to worry about the bodies. You can go a lot farther if you can maintain stealth for an entire mission, or at least for as long as possible. In that, batons and stun guns will be your silent friends. Sometimes combat needs to happen, but more often than not, if you are shooting then you probably did something wrong, or at least are taking a much harder path. 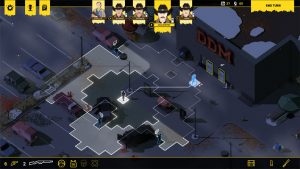 You can have a lot of fun with Rebel Cops if you crave turn-based combat. It may not be as polished as some titles, but does play smoothly once you understand all of its nuances and quirks. The recent addition of an unlimited save mode is a godsend for more casual players who don’t want to see hours of work erased with a single misstep leading to a team wipeout. Yes, this could lead to save scumming, but it’s a single player game, so if a player wants to use that technique, why not allow them to have fun with it. I know I did during this review. 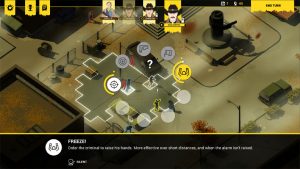 Rebel Cops is a perfect game for those looking for brutal turn-based combat. It’s also would be good for players who liked This is the Police 2, but also loved the turn-based combat aspects of that game. It probably needs a little refinement before it’s ready to take on something like XCOM. But Rebel Cops is a solid turn-based battler in its own right, and worth a shot if you enjoy this kind of challenging, tactical gameplay.