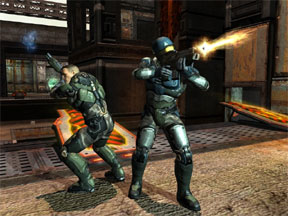 [[Editor’s Note: The scores listed here are for the PC version of the game (see the bottom of this article for system specs). The scores for the Xbox 360 version would generally be slightly lower. For the 360, the new Quake gets 3 + Gems for Graphics, 3 Gems for Value and 3 Gems for an overall score. All else is the same.]]

Quake has always been a series that puzzles me. If anyone remembers how Quake was supposed to start, it involved what many people will consider a thunder god like Thor with a lightning hammer as a main weapon. Eventually the game became a unique first person shooter with almost no true storyline. However its 3D engine had its moments, and when accelerator cards were released, the engine set the foundation for future shooters. The single player version might not have been much to write home about, but the lightning quick multiplayer made up for it.

The sequel, Quake II, took a completely different route. Abandoning any links to the original game, the sequel pits humans against a mechanical alien race called the Strogg in a desperate invasion assault. The single player version here was the center of attention, but the multiplayer too held its own.

Quake III again went another way: multiplayer deathmatches while leaving the single play to only a training ladder.

Now six years after Quake III came out, the series finally receives a true sequel with Quake 4. However, the gameplay feels like it hasn’t evolved with the graphics.Quake 4 takes place right after the events of Quake II. Despite the death of the Makron, the Strogg forces haven’t backed down. That doesn’t stop the human forces, and the next wave of attacks are underway.

Enter Rhino Squad, an elite commando squadron. Players are in control of Cpl. Matthew Kane, a soldier of Rhino Squad sent to the heat of battle after his drop ship crash lands on Stroggos. Along the course of the mission, he will partake in a mission to destroy a device called the Nexus: a main communications hub for all the Strogg.

However, later on in the mission, Kane will end up being captured and transformed into a half human, half Strogg hybrid seeking revenge.

Quake 4’s gameplay is standard first person fare. Along the way, Kane will come across fellow Rhino Squad members. Medics will be able to heal him, while Techs replenish his armor. In addition, upgrades will be available for all of his weapons: the machine gun will get an extended clip, while the nail gun eventually gets tracking rounds.

This is all very nice, but still the gameplay feels like every other shooter ever played. Even the whole "to beat the enemy, you must become the enemy" concept falls through. Aside from getting a 25 percent health boost and being able to translate the Strogg language, playing as a Strogg is just the same.

At least watching Kane become a Strogg is a terrifying experience, worth the price of admission since you are viewing it in first person.

Running on the DOOM 3 engine, the PC version of Quake 4 runs at a smooth clip, but since Quake 4 feels more like an action title rather than a horror title (as DOOM 3 was,) the scare factor is diminished. However, despite looking just as good, the Xbox 360 version suffers from an erratic frame rate.

Rarely running over 30 frames per second, there are times when the framerate makes the game unplayable. I know that this is the first generation of 360 titles, but after seeing Call of Duty 2, and to a lesser extent Perfect Dark Zero, running smoother, this is inexcusable.

On the bright side, the single play mode does have a decent storyline, complete with highly competent voice acting. The soundtrack is limited but it sounds like it came straight from an action movie.

Despite the visual improvement of Quake 4, the gameplay is still left in the late 90s. In this era of Half Life 2 and Far Cry, series like Quake need to upgrade more than their graphics engines. The PC version gets the higher score because of the more stable frame rate, providing you have the fast enough system to run it.