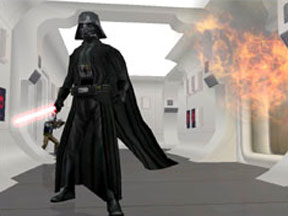 More! That’s what Battlefront 2 is compared to Battlefront. There are more units, more battle options, more variability, more opportunities to make battles unique and the game is more replayable. The object of the game is not always just to eliminate the enemy or capture all the command posts. It has the same feel and action as Battlefront, but the variety, detail and graphics are taken to a new level. And in this edition there are no more Gungans. I guess even LucasArts got tired of them.

In the campaign mode you play a member of the 501st storm troopers. You follow their role in the Clone Wars, to the day of the infamous order 66, through the growing power of the Empire and on forward into the growing days of the Rebellion. Putting the campaign in the perspective of the Star Wars movies, you begin in Episode 2: Attack of the Clones and finish with Episode 5: The Empire Strikes Back.

Most missions can be done with the standard trooper, soldier or droid, but the sniper, engineer and other specialist options can be critical to achieving your objectives. At the battle of Kashykk the combination of lots of vehicles, wookies, wide beaches and high towers with turrets create a perfect environment for the specialist units. The standard troopers do alright, but are easily killed by the heavy fire power and the enemy snipers with lots of distance and cover.

During the Campaign mode the option comes up to spawn as one of the major characters at certain key moments of a mission. The heroes are not essential to completing the objectives, but they make some of them much easier to win and a few missions are almost impossible to complete without playing the hero character.

The Campaign requires a lot of tactical and strategic insight to complete the missions and the numerous objectives for each. There is no one trick for achieving an objective and sometimes going off track can make it easier. But, take too long and your squad or wing mates get destroyed and you lose by attrition.

The only major problem with the Campaign mode is that there are no save points except at the end of missions, which can be pretty lengthy. If you need to quit for some reason and come back, you must start the mission from the beginning. It can be frustrating during the more difficult missions when you have to repeat the first objectives over and over again. During the raid on the Jedi Temple, the early objectives are fairly straightforward, but the last few are very difficult. If you fail, you must then repeat the entire mission every time until you achieve the last objective.

The Galactic Conquest mode is improved from the simplistic Battlefront mode. You play on a map of the galaxy with a web of systems around an impassable Galactic Core. This leaves no single path to victory. You get to take over the galaxy one system at a time moving your fleet to attack or defend systems. You begin with only the standard trooper or soldier for your side. You may purchase specialized equipment to make available for your army in each battle and can buy new troop types to expand your army’s capabilities. The AI does a pretty good job of using the troop types available to support you in battle and does an excellent job of using the variety of troops and equipment it has available in attempting to defeat you.

The only flaw I found in the Galactic Conquest mode is that it is repetitious when you have to fight for the same planet over and over again. In one game I had to fight for Naboo five times while the AI kept trying to retake it. Even this can still be interesting as you can choose different bonuses for your armies in each battle. Make sure you buy these ahead of time!

Instant action allows you to play all the battles in the Campaign and Galactic Conquest modes from different sides and different eras with different victory conditions. There are even a few unique battles that are not in either mode. Additional hero options pop up in the instant action that can make it fun to check out and play the other side. Many of the major characters from the movies are available as heroes to play on the battlefields: Leia on the Tantive IV, Chewbacca on Yavin 4, Han Solo in Mos Eisley, Luke on the Death Star, Jabba’s Palace and Hoth (in different outfits).

Space battles are a new addition in this version. I love the wide variety of ships available for all the factions. The differences in the ground controls and flight controls took some adjusting to get used to it, but they work well. The Campaign mode has specific objectives to accomplish in space that can be on a different vessel and the objective arrows can be confusing. It helps to reference your map the first time you play. In the Galactic Conquest mode it is a challenge to balance destroying the enemy fleet’s critical locations while trying to defend yours and to keep your squad mates alive so you do not run out of reinforcements.

Also, a player can earn medals during a battle that can give you different special abilities depending on the unit type you are playing. This is in addition to the standard awards most games like this give after a battle that don’t have any impact within the game. These medals and the abilities earned can have a significant impact on the game, from quicker recovery while running to improved and elite weapons. As you go up in rank from earning medals you can get better equipment and at high levels the elite equipment becomes your standard equipment for certain troop types. This is a great feature that adds a whole new dynamic to the game. It is also a nice touch that a player’s medal status is carried over between modes.

They have done an excellent job with the graphics. As you approach a planet you can see the clouds scooting across the surface with the planet slowly rotating beneath. While flying along the hull of a Trade Federation cruiser jockeying past the towers to take out an auto-turret, the details stay crisp and you don’t see any of the blockiness you might expect up close to objects. Every detail looks great, even down to the asteroids and battle wreckage floating past. The beautiful scenery can almost be too distracting, but it is worth it to die once to admire the forests, jungles and cities. While first playing I often found that I would pause to look around and a trade federation droid would shoot me in the back. There are fewer scenes from the movies, but the animated scenes are very well done and flow well with the action.

The units change in appearance for lighting and shadows. This means that lighting and cover have a big impact on visibility and can help and hinder your units greatly. I actually had to adjust the lighting when going between the snow and indoor scenes the first time fighting on Hoth.

The sound is more than adequate, but did not blow me away. The AI dialogue is helpful and contributes to the gritty feeling of the game. The AI’s battle dialogue often didn’t feel quite Star Wars, but it is cool nonetheless. It is occasionally confusing determining whether the shouts are your side or the enemy when in tight quarters, but that also seems realistic for an up close battle.

It is possible to play using a joystick, gamepad, keyboard or mouse. Game play can be awkward if you configure the joystick for the flying use the keyboard for vehicles and infantry when trying to switch from one to the other in the middle of a battle and you are under fire. I recommend if you want to use a joystick or gamepad to change all the play modes to the same controller.

I found a lack of a default mode for using joysticks or gamepads to be a hassle. You have to set it up yourself for each controller and separately for infantry, vehicles and spacecraft. This does allow for leeway to set it up for your preferences, but can slow you down if you want to jump in and play with your joystick or game pad.

Battlefront 2 overall is an excellent product by LucasArts and a worthy follow up to the original. There are a few annoyances in gameplay, but I think it is still a great game for anybody interested in the Star Wars universe.