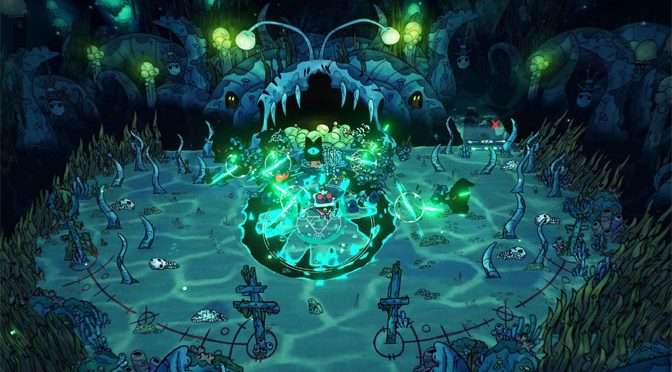 Cult of the Lamb

Gameplay in Cult of the Lamb is relatively simple and is split into three different categories. The majority of your time is split between managing your cult and going on crusades. The last category is going to different areas on the map for mini-games and fetch quests. You have to manage your cult by keeping three meters full: faith, hunger, and sanitation. 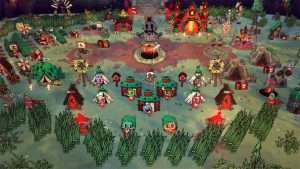 You can perform different rituals to fill the faith and hunger meters. Faith can be increased in a number of different ways, such as fulfilling member quests, building structures in your camp, providing gifts to members, and successfully completing crusades. You can build farms to grow food and catch fish to cook for your followers. Sanitation is managed by keeping the camp clear of dead bodies, excrement, and sick. 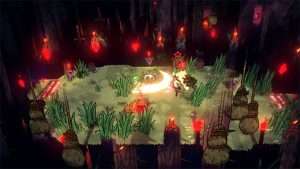 Crusades are pretty straightforward as well. There are four different areas, one for each of the four bishops. Crusades mostly consist of button mashing melee combat complete with dodge rolls and specialty attacks. The crusade maps are randomly generated, so no two crusades are exactly the same. You have to go on crusades to further the story and collect materials required for rituals; however, the longer you are away from your cult, the more likely you’ll return to a disaster. Followers will quickly become hungry, the camp will turn into a biohazard, and dissenters will threaten to run off with your money. You have to strike a balance between the three different categories of gameplay in order to succeed.

The graphics and audio are unique and aesthetically pleasing. There are a large number of different options for cult followers and decorations. The character designs strike a nice balance between creepy and charming. There are so many finer details that really make the graphics pop. When the cult followers are ready to level up, their eyes go completely blank and glow, they raise into the air, and explode dozens of tiny hearts before returning to normal. When the lamb leads a sermon or performs a ritual, their eyes change color and it looks like streams of blood are running out of them. It’s the little things. 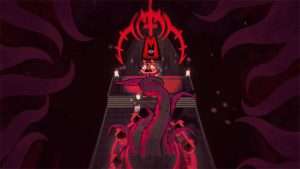 The background music is also super catchy. Some players have said they would listen to the music outside of the game, and I very much agree. The sound effects are also unique and crisp, from the loud twanging bang of a special missile shooting from your weapon to the satisfying popping sounds of collecting follower loyalty. There are no recognizable spoken languages in Cult of the Lamb. The bishops and characters that communicate do so in a garbled language full of pops and clicks. The cult followers speak their own language, which is usually accompanied by thought bubbles with different symbols conveying how they feel. 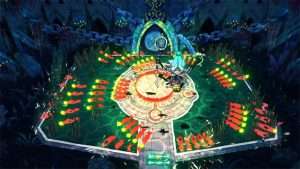 Cult of the Lamb is a ton of fun. You can spend hours just messing around in your camp, rearranging decorations, talking to followers, and growing food. The randomly generated crusade maps, starting weapons, and tarot card buffs make each crusade fresh and interesting. The game also has four different difficulty levels. The main menu shows a “Roadmap” feature that is not available yet, and the developer Massive Monster has indicated there will be more DLCs coming to the game. All of this boost the value and replayability of the game. 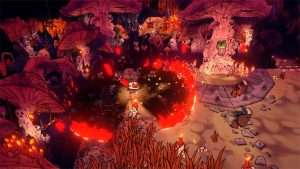 The only downside to the game for me is the bugs. I wrote a Fresh Look column extensively looking at the bugs for Cult of the Lamb. The majority of these bugs have been patched, so I’m only docking gameplay by half a point. The reason it’s still a ding against Cult of the Lamb is that the frame rate still occasionally dropped on me. Once it was so bad that I couldn’t complete the crusade I was on. 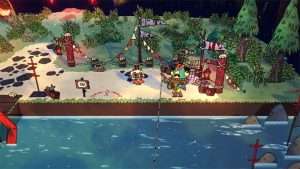 Despite the minor gameplay issues and bugs, Cult of the Lamb still earns 5 out of 5 GiN Gems. Cult of the Lamb is a fun experience. It’s quirky, different, and has swept the world by storm. I’m excited to see what developer Massive Monster comes out with next.