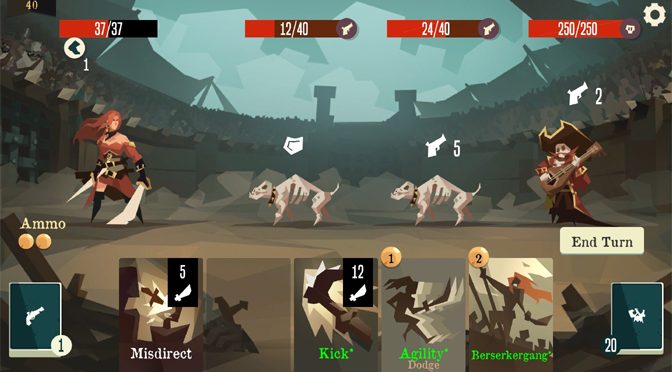 I don’t know about you gamer, but when I think of pirates and swashbuckling I think of card games. You all remember Long John Silver and his early years as a Magic: The Gathering tournament winner before he turned to all that piracy. While this may seem like an odd concept for a game, I was more than willing to give it a whack and see if I would be surprised. While not blown away, I still found a game that is enjoyable. 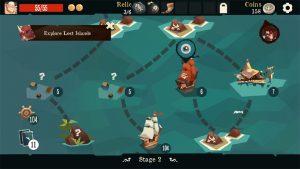 Pirates Outlaws takes place… somewhere. I will be honest the game’s story is so light it would blow away in a stiff breeze. You are a pirate that does pirate things to other pirates because… pirates. There are different characters you can unlock with different unique abilities. The characters are more like manikins than characters as they don’t talk and have the same personality as my garden hose.

The main point of Pirates Outlaws is to explore islands, beat other pirates and get cards for your deck. The main mechanic is ranged cards taking ammo and melee cards not affecting enemies hiding behind other enemies as much. It is really simple, but effective and allows the game to flow well.

I know simplicity can sometimes be a bad thing, but in this case, it allows the game to move at a pace to keep it entertaining. If it introduced some convoluted combat system (looking at you Here Be Dragons) it would have killed the main thing that made the game playable. 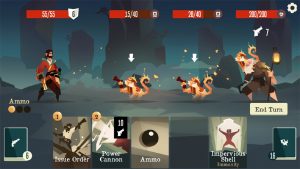 The audio in this game was on the annoying side and I quickly listened to audiobooks instead. Each little sound and grunt lost its novelty within twenty minutes. Honestly, I recommend playing the game on mute as you can then multitask as the game doesn’t make you think on a level that many other turn based strategy games do. Again, this works to its credit, but means you can sneak in the twelfth Dresden Files book while shooting pirates. 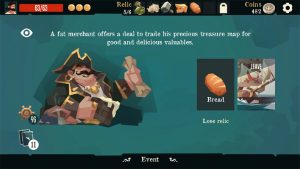 Is the game fun? Allow me to wax philosophical for a paragraph and ask you, dear reader, does playing a game for a few hours without thinking about quitting make it fun? I kept playing and playing, but was not exactly having fun. It is a weird place to be in when I realize I missed lunch and my cats are hungry enough to plot my demise, all while not really enjoying it. It plays on you’re “want to do better than last time” desire to try and unlock things to use to do better than your last battle. It’s a casual game, through and through. 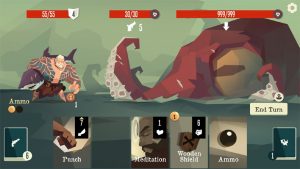 If you are looking for a deck building game, Pirates Outlaw is a good looking title and will offer good playability for the money. If you want sexy, you will want to go elsewhere. Looking for a pirate game, there are pirates in here, but it’s far from a standard pirate game. I think Pirates Outlaws offers a great pickup if you want something that will gobble time and not stress you out. Otherwise, it will eat some hours from your week and eventually you will stop for lunch and may or may not come back.