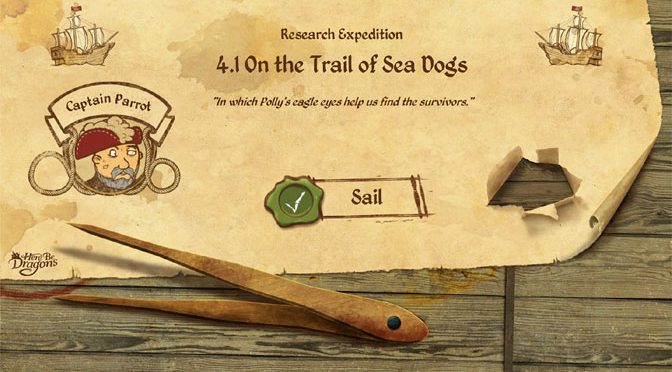 This week I got to review a pirate history satire. The chief editor is throwing over every strange genre he can think of just to see how long until I keep a bottle of Jack in the office. So with clear eyes and a slight buzz I started on Here Be Dragons. I have not had any experience with Red Zero Games and, truth be told, despite the lackluster score for Here Be Dragons, I would be interested in whatever future games they develop. It’s clear what they were trying to do, and it is clever. But too many gameplay elements sink the effort here.

Here Be Dragons is a satirical look at sailing in the days of Christopher Columbus. This mainly includes fighting creatures of the sea in an attempt to “purify the oceans.” 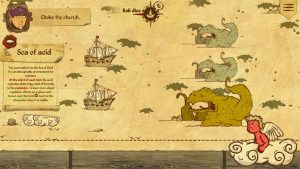 The story is entertaining and plays on history really well. The story is narrated by a bartender through different characters. This includes the court alchemist and whatever dim-witted captain he finds along with a crazed priest intent on merman genocide. Every turn in the story was fun, engaging and made me want to devote hours to the game to learn their fates. However, as much as I loved the sailing-centric story, it would eventually hit an iceberg, so to speak, in terms of gameplay. 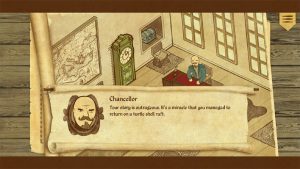 Maybe I am an outlier and this game is so well designed that I am too much of a caveman to understand why Red Zero Games thought the combat system was a good idea for a strategy title. To help everyone understand what I am talking about, here is a brief description of what I am referring to. Before combat, dice are rolled and depending on the values and who has initiative, you assign them to skills that need those rolls. If you or the monsters are unable to use the dice, each unit takes one damage. 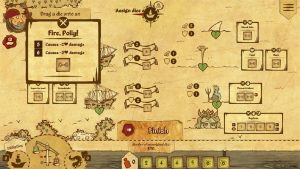 I feel this shouldn’t have to be said, but if the main focus of your game is based on getting lucky rolls, then it’s not a strategy game. It’s a luck-based combat game, or perhaps gambling. Half of the time I played, I could tell that I was going lose just looking at the opening rolls. What separates this from games such as Baton Katos and trading card games such as Magic: The Gathering is there is an element of control in them. While there is luck involved in those games, there is a control in building a deck to have a statistical advantage against opponents. Dice don’t operate like that. Sure, you can reroll, but everything you are building in terms of a strategy involves dumb luck and nothing more. 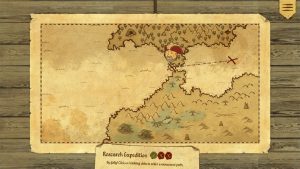 The audio in this game also gave me a few issues. While the music is well done and fits the tone and is generally pleasant, the sound effects are completely different. After an hour I had to turn off the volume and listen to economics podcasts instead. Sadly, the game became a little less annoying while the podcast talked about the market’s response to the COVID-19 outbreak, which was better than listening to the game’s default sound effects.

In terms of graphics, they are simple in Here Be Dragons but fit the aesthetic really nicely. This and the satirical story are the game’s best qualities. 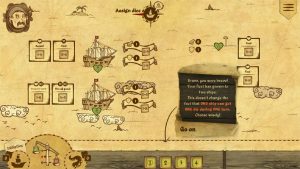 Overall, I can’t recommend Here Be Dragons to the general player. If this is in your niche, then by all means give it a shot. Otherwise, I could give a laundry list of other games to buy instead that are more closely based on actual strategy. Based on the strange combat system and agitating audio, Here Be Dragons can only earn 2 GiN Gems for its treasury.

However, it’s clear that Red Zero is a skilled development studio. I look forward to whatever they put out next, and hope that their next title sticks a little bit closer to the fundamentals of gaming, and then adds the irreverent humor and cleverness on top of that more solid base. If they do that, I bet their next game is going to be pretty great.