In 2008, the animated robot hit WALL-E was released to huge fan-fair and critical reception. ION LANDS’ newest title Phoning Home has the heart of the great film, but kind of stumbles elsewhere. Phoning Home starts you off in the role of a robot who has crash landed on an unknown planet while looking for resources. From that point, aided by the voice of your ship, you set off to do one thing. Can you guess what it is? I’ll give you a hint, it’s in the title. Yep the whole goal of the game is too find a way to contact your home planet for help.

The story itself is interesting, and once you get into it you’ll find a nice little trail that will have you smiling the whole way through. The path the robot takes is linear, and deals with themes of life and hope in a way that while not new is heartwarming to say the least. 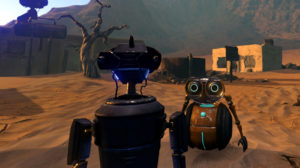 One large part of the fun is the voice of your computer whose well timed and abundant chatter is both informative and entertaining. The voice is acting is well done, and while it falls short at times, it is overall very enjoyable. Unfortunately, however your character alongside another robot, ION and ANI respectively, have pretty much no personality and it becomes a little tiring only having your computer AI talking to you much later in the game. By the time you get to that point, there will be other more pressing issues hurting your experience.

Phoning Home operates like many third person survival games; there are resources to collect, dangers to avoid or fight, environments to explore, and things to build. The mechanics are straight forwards and not that hard to master, and once you get going you’ll find yourself moving through most areas and problems with ease. 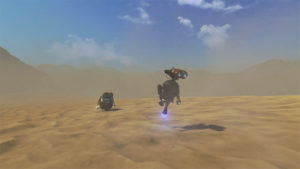 The good news almost stops there for Phoning Home. The first and most common issue with the game is how buggy it is, especially for a finished title. It is not uncommon to find yourself falling through the map, getting stuck on objects, glitching through walls, or just being hurt by things that aren’t even there. Alongside this there is your robot friend ANI, who is one giant escort mission, and frequently glitches out, gets stuck, and makes your life a whole lot harder. 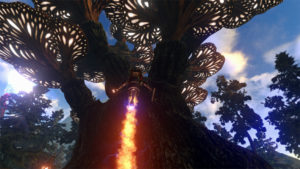 Even when the game is working, outside the first few hours, there really isn’t a whole lot there to enjoy. Movement is slow and moving faster requires the use of fuel which drains at a rapid rate. Another flaw in movement is your booster which is unreliable at best, as its ability to lift you into the air seems to fluctuate randomly often at the cost of your life. This is unfortunate as the world itself is quite interesting and varied in its size and details. What works against that is the tedium you run into later in the game where resource collection and item building becomes a chore that often drains from the atmospheric and gameplay enjoyment. The game’s resource collection system is completely unforgiving. If you don’t plan well, you will be doing a lot of slow backtracking. 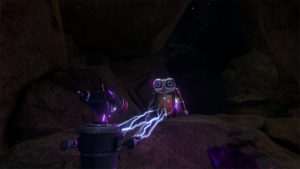 From an artistic standpoint, it’s a tale of two directions. On one hand, you have the sound design. As I stated previously, the voice acting is on point for this game and helps enhance the story. Also, one of the best parts of the game is the music which is a very soft and soothing electronic and natural mix of sounds. In fact, the sound track is available separately though the Steam online service, and I would recommend checking it out. It often helped me through the much more tedious and unfulfilling portions of this game, and would make for good music for a bunch of different tasks. 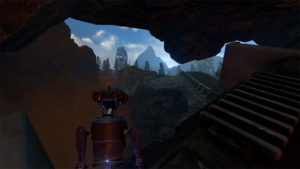 The visual side of things is much less astute. Graphically, the game is extremely unstable with the framerate dropping terribly any time particle effects are around, which is frequent enough to be a problem. Visually the game isn’t that impressive either, everything looks like it should but by no means will your retinas be in awe of what is being rendered.

The story of a character lost in an unknown world is not new to us by any stretch of the imagination. Whether it be The Wizard of Oz or Alice in Wonderland, we’ve all heard the tales and enjoyed them. Unfortunately, while Phoning Home has its heart in the right place and feels like it could be a stepping stone for something better, it doesn’t deliver where it matters. At 20 dollars, I can’t recommend the crash landing.