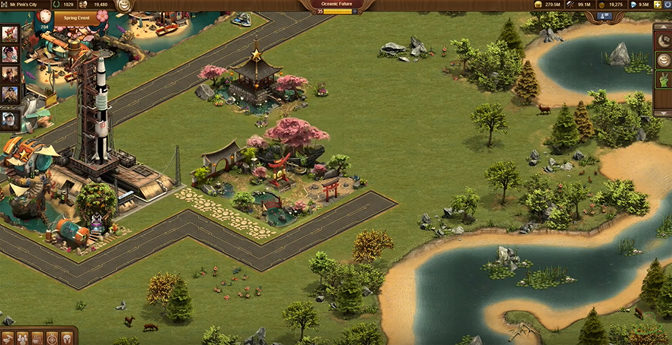 Following an April Fool’s version of InnoGames TV over the weekend, the video game publisher has now released the real episode. The approximately 8-minute video features Ancient Wonder improvements for its fantasy city-builder Elvenar, the Spring Event for Forge of Empires and a new game element in Tribal Wars: Tribe Skills.

The April episode starts with Forge of Empires’ game designers Thi and Kai explaining the new Spring Event, which is inspired by the famous cherry blossom festivals in Japan. Players will be rewarded with spring lanterns from March 28 until April 17 after successfully completing quests. They will be able to open three different types of chests which hold various rewards including the new Cherry Garden set buildings and boost items.

On their end, the Elvenar team unveils new information on their Ancient Wonders and Easter Event buildings. Starting soon, players will be able to improve the strength of their ancient wonders a second way: by improving certain things in their city. Previously, the only way to boost an Ancient Wonder was to upgrade it, now the special buildings are linked with various things in a city. If a player improves what is linked, the Ancient Wonder will automatically become stronger. In addition, game designer Timon shares how the Easter Event buildings will produce coins, goods, supplies and even battle units this year. This is in contrast to last year’s event buildings that only gave Culture and (some of them) Population.

Finally, Artist Camilo unveils Tribal Wars’ Tribe Skills. In the future, players will be rewarded with prestige for staying in a tribe. This new currency can be used to activate a time-based boost for all player’s villages or to increases the tribe level, which unlocks more boosts to choose from. The new feature will be released on all worlds soon.