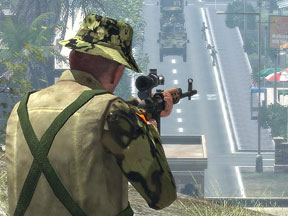 For a little while, I was back in 2001. That’s when Operation Flashpoint came out, a game which was really unlike anything we had seen before on the PC.

Certainly we had seen wargames before, but mostly they were the "run on a track" type where the player is forced to achieve objectives on a limited map where scripted things happen at different points. And if you got hurt, there was always a handy health pack lying around to magically heal you back up.

Flashpoint shattered that mold with huge battlefields that were not really entirely scripted, so you never knew what the enemy would do if you interfered with their plans. There were missions in that game which were instant classics, like one where you are left alone and have to crawl through miles of enemy territory to reach your extraction point. I did that mission about a million times before one of my friends told me that he snuck into a barn sitting behind the lines and stole an old truck, which made his flight a lot easier. Flashpoint was that kind of game.

Fast forward to today and the release of ArmA: Combat Operations by the same developer, Bohemia Interactive. Other than a bit of graphical tweak and an expanded scope, ArmA is pretty much identical to Flashpoint. That means that if you loved Flashpoint, I see no reason why you would not love ArmA. However, if you found that Flashpoint required a degree of patience that you did not possess, then ArmA is not going to be any different for you.

The plot of the two games is also extremely similar. Before, you were stuck on an island with your unit that looked a lot like Iceland. Here you are part of a US Army that is stuck on a tropical island. In both games the evil people "from the other side of the island" attack in force in a devastating surprise move. The bad guys have the backing of the Soviet Union (which is a little dated today) but this basically gives them access to top level equipment from the Warsaw Pact nations to oppose you.

As such, both games start with just a normal type of day, and then all heck breaks loose and you are caught in the middle. Being a member of a small squad who gets their vehicles shot out from under them is not a good place to be, and in ArmA you will be taking a lot of fire just trying to pull back in the face of an attack of overwhelming force. I was killed about ten times in this first mission and had to keep reloading.

That brings up one of the things about ArmA which will separate those who love the game from those that hate it. ArmA is pretty realistic. If you get shot, you will likely die. Sometimes this is not the case, but you will certainly be hurting. Case in point, while my unit was trying to escape, I was hit and suddenly fell into a prone position. I could not get back up and was starting to get a little angry. Then I realized that I was probably hit in the legs, which was why I could not stand. The Bradley fighting vehicle that was pulling me out was parked over 300 yards away, which might as well have been on the moon for all the faster I was moving with bad guys all around. There is no healing in a mission, just like in real life.

Also, I started to think I could figure out the level after my tenth death. I did not make it far after getting shot in the leg, but I was lucky enough to see where the guy who shot me was standing, which was really far away between two buildings up on a slight hill. So when I did the mission again, I targeted that spot and waited for Mr. Sneaky to step out. And guess what? He did, at least the first time. I gunned him down and was quite happy.

However, I was killed later on and had to, yes, play the mission again. This time I waited for the sneaky guy and he never showed up. Either someone else killed him before he got there, or he simply went a different way.

You see ArmA is truly a living battlefield. When you hear shooting off in the distance, that is real gunfire and not atmospheric. Somewhere friendly AIs and enemy ones (or real people in multiplayer) are really shooting each other. So missions are going to be different every time. And the battlefields in ArmA are actually larger than the ones in Flashpoint. Here they can range for 20 or 30 square miles per mission, arranged in a chain of islands that makes up 400 square miles.

The developers do a good job of making the world a living one too, with tons of civilian vehicles and people. In one mission I took over a guy’s four wheel drive truck cause I got tired of walking. He was a little angry, but hey, I was the guy with the gun. Not that this is Grand Theft Auto or anything, though I kind of thought about that right at that moment.

There are also of course hundreds of weapons all with realistic characteristics and 30 military vehicles including helicopters, light armor, tanks and even jet fighters that you can command. It’s a little unrealistic to think of an infantry guy who is a sniper, can fly helicopters and jets, pilot boats and drive a tank. But this is a game and this makes things just a little more fun.

In the single player campaign, there is a neat way to introduce missions. You have a main map and can jump right into a battle, or you can instead take on side missions like a black ops one in night gear where you try to sabotage enemy armor. If you do the side missions, it influences the main battle. So if you disabled the tanks in the side mission, the enemy won’t have them in the main one.

On the bad side, the graphics are a little dated. In fact, they don’t look that different from the Flashpoint days. Distance scenery looks good, but up close objects and especially people look a little fake. Also I think the game tries to overreach itself a little bit. You use just about every single key on the keyboard to control something in the game, and it’s all a little bit too much.

That said, if you stick with the game, you will find missions that are very memorable (my favorite was a sniper one) and experience something unlike any other game, except perhaps Flashpoint.