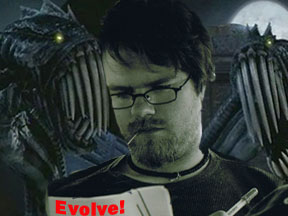 I'm playing The Darkness on the PS3, killing and bringing forth wisecracking darklings, when I'm hit with the option to have one of my demon heads devour an enemy's heart. Now, I've never been one for the censorship of violence in video games, but I have to admit, the execution command for devouring a lifeless heart gave me a funny feeling in my stomach region.

I think it was the word choice: Devour. Had they just written "Take the heart," I could have tricked myself into thinking that he was putting the thing in his pocket, merely borrowing it really, but to devour a heart leaves nothing to the imagination. It's gruesome. Uncivilized.

Of course, it doesn't help matters that the goons in this game look so real.

However, this is a game. Right? Not set to evoke emotional responses, or so a lot of people would have us believe.

It's true that games have come a long way in a short time. If you don't believe that, then go play Zombie Nation on the NES, then after you get through scratching your head, go play any game in the Fatal Frame series. And with the number of older gamers playing as much as the younger crowd, it might be next-step time for the mentality of all those people paying close attention to the industry.

Just imagine it: Were we supposed to censor the works of Burroughs, Sontag or Kafka because they're just supposed to be writing stories? While we're at it, let's go ahead and pull all the movies in the world that contain the word "the" in their title for no apparent reason. It's ridiculous.

Not to say that Darkness, or any other game for that matter, has much pull over Naked Lunch, but that's not to say that they couldn't if they were allowed to progress, violent tendencies and all. But I guess everything goes through a resistance of sorts as it matures. This resistance is usually benign and goes away like a withered pimple, but that knowledge doesn't make the process any more enjoyable.

Take comic books. Back in the day, they had the Comics Code to make sure that storylines were clean and none-too-offensive for the little kiddies. The only problem was that there were others out there looking for a more mature experience that the Comics Code would not allow comics to deliver. With the Comics Code in place for all time, stories like Watchmen, Road to Perdition, and Astro City would have never seen the light of day; and Watchmen won the freaking Hugo award! I, for one, would hate to live in a world where Alan Moore wasn't producing. Ah, but I digress.

Drawing upon the connection of games to comics, I come back the original focus of this article: The Darkness. Adapted from the 1996 comic, Darkness hit the scene on June 25th and showed how grown-up a game should be. Besides all the interesting little side details, such as the graffiti references on the walls, such as the telephone calls that play an assortment of different messages, such as the full-length films like To Kill a Mockingbird and The Man with the Golden Arm that are shown in random televisions throughout the game, Darkness showed how much potential a game has to evoke real emotional responses to the characters in the game, especially for its protagonist. There are people out there that would say that an emotional response toward a game that isn't disgust is ridiculous, but I see these responses as the coming of the next step.

All the little things in this game (and believe me, thanks to the capacity of the Blu-ray and HD-DVD discs, there are a LOT of little things) integrate with the theme and structure of the work overall.

This is what all games should be doing in the future: this is what I'd really like to say, but we can't forget the need for other types of games in the hype of all this. Just like there are still comics out there for children, we can't forget that there is an entirely different demographic out there playing games, and these kids don't want theme and unity and whatever; they want a good, fun game to play.

So there, I've acknowledged them. Now, let someone else deal with those players. I'm more into pushing games into the realm of art, and though this isn't something that will probably catch the way I'm hoping it will, it would be nice to have more titles doing the things that the Darkness is doing now, and what a number of other games in the past have accomplished.

I've always been of the persuasion that video games have a lot more to offer than what the nay-sayers will allow. With the Wii, I saw a hands-on experience that could be pushed into an educational direction. With the PS3 and 360, I saw the next step toward creative and fully interactive films. Either way you cut it, the day of people applying the use of video games primarily to children and young adults is nearly concluded, and with that done, we can start focusing on issues that really matter.

GiN Product Reviewer Chris Richards will have a full review of The Darkness, complete with all the blood and emotion, in the next couple weeks, so watch this space.