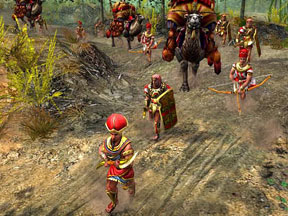 The other week there were a couple parties friends had to celebrate the release of the movie "300" to DVD. To spice up one party some, I brought a copy of Ancient Wars: Sparta along because it was obviously inspired by the film. Unfortunately, it might have been more fun if I had brought an aging copy of checkers or Twister instead.

Ancient Wars tries to show the bloody struggles that occurred between the Spartans, Persians and Egyptians between 500 and 450BC in a realistic looking real-time strategy game. There is actually a fair amount of history in the game. I was unaware that the Spartans and the Egyptians had anything to do with one another before playing for example.

Each of the three nations has its own separate single player campaign, and sometimes other nations with their unique troops will arrive on the scene as well, often as playable armies. So it looks like Sparta might be the new Age of Empires? But that is not how it plays out.

When I first started playing, I was a Spartan at the pass at Thermopylae, and thought I was in for a real treat right off the bat. In the back of my mind I was thinking that there was no way the developers would blow their best mission right off the bat, but I was hopeful. Unfortunately, the Spartan king sat me down at the campfire and decided to tell me a ton of Spartan history, which triggers a lot of very dull flashback missions before you can fight the famous battle. Here is where the game breaks down, because the missions are just not very good, except for that one inspired battle at Thermopylae.

Missions are terribly scripted with small groups of troops forced to march along winding paths covered with traps and ambushes as they approach whatever goal the scenario offers. If you save and load enough, you will find all the points where events trigger "if a soldier steps over this line" and can act accordingly. I know a lot of games are scripted, but it’s normally more transparent than this.

As the game drags on to new scenarios, your armies will grow in both number and power which leads to more fun gameplay, though my guess is that most people probably won’t want to put in the hours and hours of effort to get there. The early missions are about as fun as walking through a maze being pelted by slings and arrows from off-screen enemies.

The AI is also pretty stupid for both your troops and the enemy, though it obviously affects you much more. Peasant workers won’t go where they are needed, but instead must be individually directed to mine gold, chop wood and grow food like old school Warcraft.

And troops tend to take the long way around to get into battles, getting stuck on each other and terrain objects like trees while the few troops in the frontline are dying and in bad need of support. No wonder the Spartans were able to hold the pass at Thermopylae if the Persian army couldn’t figure out how to get into battle. Almost every time my king, who has the best weapon and armor, would be sitting in the back of the pack trying to find how to go around a hut or something while the weaker troops tried to hold the line.

The AI of ships is even worse. They constantly crash into one another and seem to bump back and forth until finally giving up and staying put. In one mission I had to launch a seaborne invasion, but only one of my ships could figure out how to get down a narrow pass into land. The other was stuck just offshore, getting attacked by archers. Then the troops that had landed got attacked and overwhelmed because I could not get any reinforcements to them. The first boat had blocked the path. That is simply terrible AI, compounded by poor level design. If you know your AI is as dumb as a rock, don’t build levels that require them to go down narrow passes where they are sure to get stuck on the walls and each other.

On the plus side, Sparta does try to offer a few things that are different from most standard wargames. After a battle you can direct your peasants to collect fallen weapons lying on the ground. With these fallen weapons you can design new troop types at your barracks and field units using your enemy’s equipment, or come up with some combination load out of enemy and friendly weapons that works better than either nation’s native warriors. But to keep fielding these troops, you will have to either keep killing soldiers to get their fallen equipment, or research how to make the enemy’s weapons yourself.

I always wondered what happened to all the armor and weapons lying about following a huge battle. It makes sense that someone would collect what amounts to millions of dollars (in modern money equivalent) of gear just sitting there on the ground.

Besides stealing enemy weapons, you can also capture some of their equipment. If you knock a warrior off their horse, you can have one of your warriors jump on. You have to be careful though, because ranged troops will sometimes harm a rider and sometimes harm the horse. And a dead horse is not much good to anyone. Ships can be cleared of bad guys and boarded, putting them in your navy. And even ballistae and other siege weapons can be captured and turned on their owners, which is a very satisfying strategy.

Building damage and fire is also very realistic, though we have seen this in other games.

And yes, eventually, you do get back to Thermopylae. However, despite great graphics and some unique features, a dim AI and a long series of boring missions means this Sparta only barely passes. Naval combat in particular needs to either be fixed or eliminated from the game, though the AI all around could use some schooling. The games included on the HD-DVD of 300 are pretty much more fun to play than this one.