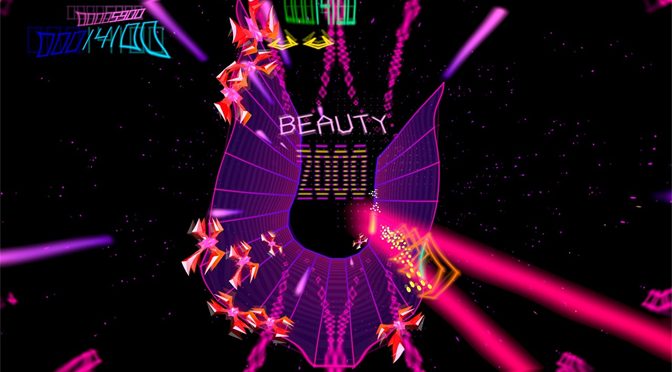 I never owned an Atari Jaguar. At the time, I owned both a Sega Genesis (with all its expansions) and a 3DO. There were also not many titles out on the Jaguar that I wanted to play that I could play on those systems or on my PC. But still there was one title that did look very promising on that system, it was Tempest 2000. 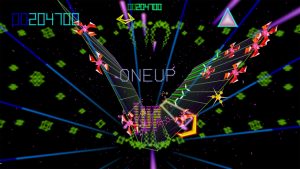 Eventually I got to play it on my Sega Saturn, and later on played the enhanced PlayStation version called Tempest X. Both games looked absolutely amazing for what the systems were able to handle, and that amazing soundtrack completely won me over. In fact, to this day when I play the classic arcade Tempest, I’ll still have “Mind’s Eye” on in the background as it fits the whole series perfectly.

Then in 2000, Tempest 3000 was released for the short lived Nuon DVD enhancement format. I admit I have had much experience with it, aside from a few plays at PhillyClassic and at MAGFest but my time with it wasn’t very promising. Whether it was the blurry graphics, the weak frame rate (mostly due to the limitations of Nuon) or the sluggish gameplay, it just wasn’t as fun and kept me into the game as much as 2000 and X did. It did however add unique features such as shape changing webs.

Since then, Jeff Minter and Llamasoft released one more Tempest style game (though as the rules state, is NOT Tempest) in the form of Space Giraffe. Yet the game looked like Tempest but it had its own unique rules that made the game unique, such as acquiring pods and charging up your “giraffe” to “bull” monsters off the web and rack up the bonus multiplier. The game received mostly negative reviews, which I never understood. It was a unique game that I enjoyed a lot, and it deserved much more credit then it got.

But now, Tempest is back. First announced as a launch title for the crowdfunded “AtariBox,” later called the “Atari VCS,” Tempest 4000 has finally arrived on consoles and PC. For those who wanted an enhanced version of what Tempest 2000 was, this is for you. 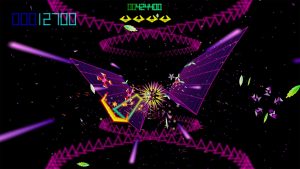 I don’t think I need to give an explanation of how to play the game. If you’ve played the original 1981 arcade game, you are familiar with the gameplay. Shoot enemies that approach from one side of the web before they get to you. It’s a very simple arcade game to get into, and all of the 100 stages (which ironically are named after something Atari related, such as CX-40, the part number for the iconic Atari 2600 joystick) offer their unique challenge.

As in Tempest 2000, power ups can be picked up and while they include the particle laser, jumping and AI droids from before, there are also newer power ups such as “Beauty” which makes the Claw nigh invulnerable, firing at a faster rate and scoring double the points for a limited time. It also seems to bull through Flippers just like in Space Giraffe. The Super Zapper is back, but this time it also gives double points when in use.

[amazon text=Challenge the Tempest with a copy of this great game from Amazon!&asin=B07CLBBG7N]

The classic power ups also have some benefits but also some side effects. For instance, when jumping, you score no points unless it’s part of a Super Zapper attack. But on the other hand, both the Super Zapper and the AI Droid can save your life should you be grabbed by a flipper. You have no idea how much I wanted to see this feature added into the series and it’s about time it did!

Control does take a little getting used to. The analog stick does add a touch of momentum to the Claw that was never seen before. Eventually I got used to it but for anyone coming from Tempest 2000, it might take you for a loop. 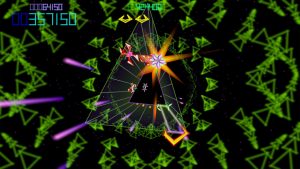 The same bonus stages from 2000, including the rings and the green path are back. But this time I find that the green path stage is much easier than before. I was never able to complete it in 2000 but now I can complete it without a problem. Then again, I had the same issue with Pulsars. I could never see them in 2000 or X until it was too late. Now I can see them much easier, and with a flash of lightning as feedback I now know when they are destroyed.

And speaking of feedback, that’s where the audio exceeds in. A majority of the game’s audio is taken from other Atari games. The Claw’s jumping is taken right from Pitfall on the 2600, and all the powerups are announced by a robotic voice that sounds like it was taken straight out of a Speak ‘n Spell. Then there is the soundtrack…that amazing soundtrack. I really wanted them to bring back the classic tunes from Tempest 2000, especially Mind’s Eye. Not only did they do that, but it features both the Atari Jaguar version and the CD enhanced versions used in the Saturn and PlayStation versions (as well as a separate audio CD,) as well as the soundtrack to the PS Vita exclusive TxK! 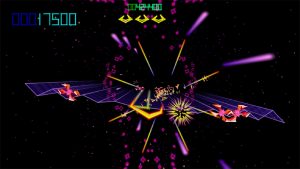 Gameplay is available in three modes. The default mode is “Pure Mode” which starts from the first web and earns an extra life at every 100,000 points (provided you grab the 1up power up that is.) Then there is “Standard Mode,” which takes place when you start on any stage aside from the first one. Lastly there is “Endurance Mode,” where you are given 7 claws with no extra lives available.

Again, anyone who is familiar with this series knows how gorgeous they can be, and this is no exception. Now running at 4K resolution and 60 frames per second, Tempest 4000 looks stunning, especially as the webs melt after they are completed. As stages go on they will morph and rotate and will be harder to keep track of, similar to the way they acted in Space Giraffe, but that just adds to the overall experience.

Sadly though the game is expensive. Retailing at $30, it might be too much for what is an enhanced arcade game. If this was offered for maybe $15 then it would be a better deal. But in the end, for those who can afford it and love Tempest 2000, then Tempest 4000 is definitely for you. It is the most fun I had with a classic remake in a long time and I’ll keep playing to get higher on the leaderboards! 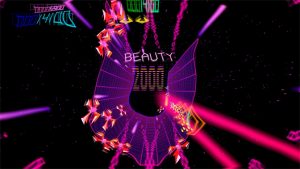 Pros: Tempest returns! Everything I loved about Tempest 2000 is back with even some small elements also taken from Space Giraffe. 4K and 60 frames per second on the Xbox One X. Soundtracks from BOTH versions of Tempest 2000 and TxK are back! The AI droid can now save you from death!

Cons: $29.99 might be a bit too high a price for this game. Momentum based controls might take a little getting used to.