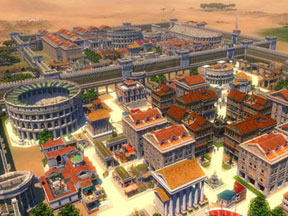 Anyone who has been playing computer games and especially simulations any length of time knows about the Caesar series. It’s basically like SimCity, but set in ancient Rome. The game even launched some spin-off games like Cleopatra. But it has been a while since Caesar III came out, and most people suspected the franchise might be dead.

Then I happened to run into a guy in a very back corner of E3 playing what looked to be Caesar III, but with 3D graphics. It turns out he was a developer working on the game Caesar IV, and was happy to show me an early demo.

Now, months later, Caesar IV is finally out. And oddly enough, after a long drought of no Roman titles, Caesar IV is released into a field of competition. Glory of the Roman Empire has already been reviewed by GiN just last week, and CivCity Rome will be reviewed on Wednesday. So, where does Caesar IV fit into this Roman hierarchy?

Let’s start with the graphics, since that is the feature that the publisher really seems to be pushing. Some people probably won’t like the move up to 3D, because it might not run on their computers, but really, the move to 3D is necessary in today’s world. And things look fantastic.

All along your empire you will see citizens going about their daily tasks. Immigrants are moving in pulling little carts, people are going to the well for water or off to the market to buy some food or hurrying to their jobs. If you click on anyone, they will give you a brief status update. Someone moving into your town might comment on their first impressions, while a guard on patrol will lament the fact that there are so many criminals lurking about. It’s all done very well with the graphics and the sound integrated.

You will also notice the change from day to night, and also realistic weather patterns. The first time a storm came up in the game I nearly fell out of my chair. I was wearing headsets and the thunder was quite loud along with the bright flashes of lightning. As far as I could tell, the weather and day/night cycles did not seem to have an effect on gameplay. My one complaint is that the night seemed a little too dark, as it is sometimes difficult to see things going on in your town then.

Of the three games that are competing for your hard earned denarii, Caesar IV is the most like a straight city planning game. In fact, in most of the scenarios you are given enough starting money that you can layout at least the basic framework for your town with the game paused before you really start playing. This is the most realistic approach I think because a Roman governor is going to plan out his town to start with and not just start throwing buildings and streets down as necessary. At least a good governor will do that, so it’s nice that you can as well.

The bulk of the money you will make during the game is from taxes. Unlike other games where the tax money collection is automatic, in Caesar, you will need to build a tax collector’s office. Taxes are collected from markets and large houses, so you will want your collector office to be close to them.

There are three types of citizens in Caesar IV. There are the plebs, who do all the grunt work like plowing the fields or moving goods from factories to stores. They live in large apartment buildings and have fairly simple needs like food or a well.

Then there are the middle class people. These people run all the government services like collecting taxes, working at the medical clinic and keeping water running in your pipes and aqueducts. They demand a clean fountain to drink in, and will supply the manpower to get one running for you.

The final class of people are the nobles. They don’t do anything except sit in their huge manors and demand services like entertainment or fancy foods. But although their houses take up a lot of useful land, they are also heavy tax payers, so having some in your town is almost a necessity if you need money for other things like an army or to buy foreign supplies. They seem less than useless because of taking up so much space, but trying to run a prosperous town without them is difficult as the markets don’t seem to generate enough tax income by themselves.

Caesar IV seems to flow pretty well. There are no artificial distance restrictions on buildings. If a citizen needs to walk across town to deliver their goods, they will. Clustering buildings that support one another close together will help your town be more efficient, but is not necessary. I do question the AI in regards to some markets. I have seen fields full of the vegetables that are needed at market, but the produce is only slowly delivered. I would think it would be better to cart as much as possible down to the market so that a small stockpile could be developed.

The military aspect of Caesar IV is interesting, but could use a little work. You build a fort and the weapons the soldiers will need. Then you need to build a cafeteria so that the men can eat, and staff it with people who go out and get whatever is needed. Here the workers do seem to be able to create a small stockpile to feed the legion, though you might want to build the mess hall first and get it up to speed before the legion. Finally, you need a recruitment office which will attract immigrants and turn them into soldiers. You can also train your men if you build up a training camp, but this will need to be staffed by middle class workers.

The combat is a little bit disappointing. The legions are difficult to move or to put into the correct positions. And their pathfinding AI, especially in large cities, does not seem to be very smart. If you do get them into battle properly, the results mostly depend on how many troops you have and to some degree, their training. But it’s mostly a pile up situation.

There are walls you can build and guard towers. Towers employ plebs as archers or ballistae operators, which come in handy during an attack. They are fairly inaccurate from what I can tell, but effective in large numbers. One annoying thing about walls and towers is that they need to be serviced by roads. So you have to build a road behind your walls. Not only is this a waste of space, but why do you need a road on a wall connected to more walls that do have road access? The men can just walk down the wall, which they do anyway while on patrol. But for some reason, you have to have that silly road back there.

One interesting thing is that Caesar himself will make requests of you from time to time. Sometimes he wants goods like lumber, and sometimes he wants things like the ability to borrow your legions. Be sure that if you let him take your troops on some wild adventure, that you keep at least one legion at home in case of attack. After the battle, if your legion survived they will return home, better for having some combat experience. But sometimes they don’t return.

If you are able to give Caesar his due, then your influence and approval rating with Rome will go up. Sometimes this is a mission goal. If you can’t meet the request, sometimes nothing will happen, and sometimes Rome will be disappointed. Let them down too much, and you will be bounced out of a job. You have an animated pack of advisors who will let you know how things are going. In fact, you have a whole room full of them. Although they can be a little annoying at times, listening to them will save your bacon most of the time.

Caesar IV is a lot like Caesar III with better graphics. Some of the execution of the game is not quite perfect, like a clunky menu system. But all in all, Caesar IV is a lot of fun to play, especially if you like city-building type games with a little bit of combat thrown into the mix.