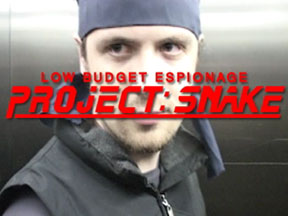 If you have heard these names before, then I’m not alone. After suffering through countless crappy video game movies, the above names represent a virtual rogues gallery. I would not have Chris Roberts up there if the theatrical Wing Commander was never released, because Wing Commander III and IV featured for the time some of the best acting ever seen in a video game. But the full length travesty that he threw upon us left a sour taste in my mouth, and my review of it featured a line about Freddie Prinze Jr. that needed to be censored in order to prevent a defamation lawsuit.

Let’s face it, with the possible exception of the original Mortal Kombat, video game based movies suck. However, some people are changing that very same opinion as we speak.

Enter X-Strike Studios, a group of maniacs from New York State. Living by the motto "videogame movies done right," they are currently providing the reality that if you take away game movie ideas from creative non-geniuses such as Uwe Boll, then the possibility of a good game movie can actually exist. X-Strike’s previous products included River City Rumble (based on the underrated NES classic River City Ransom) and Silent Horror (a spoof of Silent Hill.) But last month, they released what could be their most ambitious project yet: Project Snake: Low Budget Espionage.

I had a chance to see an early build of Project Snake last year at VGXpo Philly, and from what I saw, X-Strike had a potential hit on their hands. Since I am heading up that way to cover the VGXpo again later this month, I thought it would be fun to do a review of the full movie as my commentary this week.

Anyone who is a fan of the Metal Gear Solid series could easily follow the movie’s storyline. A group of terrorists have hijacked a nuclear disposal facility at Shadow Jesus Island based in Alaska. Only one person is able to thwart their attempts of launching a nuclear weapon: Snake.

Yes, the main plot of the movie is similar to that of the 1998 PlayStation classic, but like the title says, it is very low budget. Settings consist of office cubicles, abandoned warehouses, and even a kitchen where the launch codes are entered. Hell, even Romulan Condor’s tank is nothing more than Condor himself surrounding by a cardboard box with a turret! Even the special effects appear cheesy. Metal Gear Flair (formerly Metal Gear Rex) is a stopmotion character similar to that of ED-209 from Robocop! The settings may be low budget, but it helps to enhance the parody element.

And the parody element is done perfectly. In my VGX preview, I referred to the movie as "Metal Gear meets Airplane," and there are tons of Airplane references as well. The Colonel (Steve Smith) does his best Lloyd Bridges impression as he says "looks like I picked the wrong time of the week to stop drinking window cleaner." Mei Ling Goldman (Kristen Squire) is great as a facsimile of the flamboyant air controller Johnny while overexposing her obsession over cute items. (Her workspace is loaded with stuffed animals!) And during the interrogation of DARKA Chief Donald Anderson, there is a dead on spoof of what a popular Biblical figure is, but that’s not important right now.

Fans of Metal Gear Solid will easily get a kick of how X-Strike lampooned the boss fights as well. The fight against Romulan Condor (aka Vulcan Raven, played by George Steffler) is nothing short of genius in its own stupidity, and the pre-fight demonstration by Mensa Locust (aka Psycho Mantis, played by Ben Lathan) just reeks of mockery, as does the ensuing fight scene, done in typical Benny Hill fashion.

It has to be seen to be believed.

X-Strike definitely went all out with the characters as well. Including the previously mentioned Mensa Locust and Romulan Condor, the remaining cast includes Liquid (Tim Ekkebus), Snake’s evil twin brother who has a serious eating problem, Adam "Ocelot" Ocelot (Rich Durham,) a gun toting torture specialist who is not left handed, Crosshair Jackal (Sniper Wolf, J.C. Ostopowicz,) a professional sniper who only cars about popping pills and exposing her chest, and my personal favorite, Otto Khan (Otacon, Vince Armella,) who actually makes the original Otacon appear to have a set of caSmith.

But without a doubt, the best of the bunch has to be Snake himself. I’ve always praised David Hayter for his Snake role in the past three Metal Gear Solids, and they say imitation is the sincerest form of flattery. That sentiment could not be any more true with how Rory O’Boyle did his own version of Snake. Not only did he get Hayter’s gruff Snake voice down perfectly, he actually adds a true sense of humor to the character.

I don’t know what it is. Whether he is egging Meryl on as she guns down genome soldiers, or playing a Game Boy Advance while Crosshair Jackal gives her soliloquy as she lays dying, every action that Snake does is priceless. The straight up badass we know in the game is now a sarcastic, arrogant, snide jerk, and all for the better.

Special features on the Project Snake DVD include a gag reel (watch for the cops in the background during the Crosshair Jackal scene), a featurette of the movie’s soundtrack, trailers for future X-Strike projects, two commentary tracks, and several deleted scenes, and an alternate ending that is not at all what I expected. (Hint, don’t think of the two endings from the game.)

X-Strike Studios succeeded where Uwe Boll and many other directors have failed: making a video game movie that is actually good! The DVD can be purchased via their website, www.x-strikestudios.com, and they will be in appearance at the upcoming Video Game eXpo (VGX) in Philadelphia. I will definitely be there to see what their next project will be.