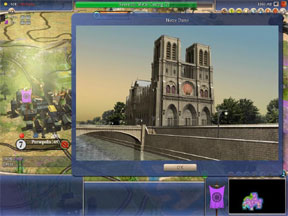 Civilization was one of the first creations by universally acclaimed game designer Sid Meier over a decade ago. Back then turn-based economical strategy games were just getting their start, and Sid’s vision practically brought forth a whole new genre. Through its incarnations over the years, Civ has seen many changes and improvements, but has always remained a fantastic game.

Like most everyone, I am totally wowed by Civ IV’s awe-inspiring 3D graphics, incredible music and sound, huge additions in content, and improvements in gameplay over its predecessors. Let me just say that hearing Leonard Nimoy reading the original Civilization’s introductory text and various quotes through the game is a singular treat. But there are certain aspects of the game that I wash they had done a bit differently. You might say I’m of two minds on the subject.

On the one hand, the 3D graphics are fantastic. Everything is depicted down the minutest detail, and they let you zoom rather far in to see it. Each city looks different, being comprised of what has been built there, and the variety of the landscape textures makes for seemingly infinite combinations. The animations of the units are impressive; you can look at them for a long time and almost forget that it’s your turn to go. The movies that play when the game loads and every time you build a monument are treats to watch as well.

Oooh, pretty! We likes it, we do! Looks at ’em closely, looks at ’em move!

Bah! Box is tricksy, box is false! We hates the disk swapping! {cough}

The great graphics do come at quite a hefty price, however. Because the game is constantly trying to update a world full of 3D objects, odd moments of disk swapping occur. These can last for about a minute or more every single turn for a game in its later stages, and can occasionally lead to the system overloading and the game crashing.

This might be acceptable if it performed like this only for systems below the minimum requirements. The inordinate amount of disk swapping might be forgivable if it happened only on systems that had the bare minimum specifications. But no, this sort of thing (both disk swapping and the rare crash) happened to me on a system that met or exceeded the ‘recommended system requirements’ on every point. When your system barely meets the minimum as specified on the box, you expect gameplay to be sluggish. But when your system is above the recommended requirements, you should expect minimal sluggishness and certainly no crashing due to overloading.

Putting in a gigabyte of memory (the ‘recommended’ specifications say 512MB) essentially solves the disk swapping problem. I don’t mind having to have 1GB of RAM to play a game, but I expect to be told that on the box.

The improvements to the actual game mechanics and content improve the game many times over. Where to begin?

Well, for one thing, you’ll notice that they have made the distinction between nations and leaders. There are a few more civilizations (English, Indian, American, etc.) than in III (though I believe less than with Conquests), and about half of them have more than one leader to chose from. The nation determines the special unit you will have access to, and the leader determines the two aspects (spiritual, economic, industrious, etc.), so you have at least as many choices as you did in III.

City growth is no longer halted at arbitrary numbers based upon whether a certain improvement is built. Now, it’s handled more like happiness, with a ‘sickness’ score (increased by population and buildings like factory) compared to a ‘health’ score (upped by buildings like aqueduct and certain resources). As long as the sickness number is lower than the health number: no problem. Otherwise the difference means a loss of food. Happiness works slightly better too in that, when unhappiness becomes greater than happiness the city doesn’t go into revolt; unhappy citizens just do nothing except eat food. Enough of them will become such a drain on the city’s resources that you’ll wish it had just revolted.

Resources work a little differently then they did in III. To better explain that, I’ll have to start by saying that the land spaces are handled a bit differently than in III. A space can be a certain terrain type (plains, grassland, desert, tundra, etc.). These can have any number of terrain effects (hills, forest, jungle, floodplain, etc.) in any combination, with only a few mutual exclusions. Then, on top of all that, there may be a resource. To use a resource, not only does it have to be within your cultural borders and be in the trade network (roads, rivers and eventually coastal and ocean), but your worker has got to put an improvement (mine, camp, farm, etc.), each of which requires a certain technological advance to be built. Seems a lot of work, but the benefits are worth it – some increase health in all cities in your network, some increase happiness, and some are needed to make certain military units. Some even cut the production time of certain wonders in half.

Speaking of wonders, you may notice that there are quite a few more then there have been in prior versions. This is for two reasons, as I see it. One, Many wonders seem to be made obsolete sooner, and two, many of the effects have been toned down a bit. I am quite impressed at the new diversity; where the wonders in earlier editions pretty much stuck to the Egypt, Persia, European and American, the new list spans whole new continents, containing such far-flung wonders as the Chichen Itza and Angkor Wat (google them, trust me). Almost all wonders increase the city’s culture and most also increase the city’s great person birth rate.

I guess that brings us to great people. Throughout history there have occasionally come along people of vision, who help move a civilization forward. In the game, each city generates a number of points each turn toward creating a great person. In addition to wonders, specialists will also add to this total. When a certain number is reached (which increases with each subsequent one), then a great person emerges from your city and can either help discover a technology or do something else depending upon its type (philosopher, engineer, artist, etc.). The types of specialists as well as the specific wonders determine which type(s) of person might be created.

Instead of allowing the choice between government types whole-cloth, Civ IV has implemented a set of civics akin to what they did in Alpha Centauri. Each of the five areas has choices that become available at certain advances, each of which has an effect and a level of upkeep.

Technology advances work a bit differently. While some still require both predecessors before you can learn them, most now only require one or the other. This means that tech advancement can be more varied between civilizations, and trade can be facilitated nicely.

Civ IV has religion. When you are the first to discover certain advances, you found a religion in one of your cities. Then it can spread into other cities, and some cities may end up with more than one in it. You can choose to make any of the religions in your civilization your official state religion, and your relations with the other nations will be affected by having the same or different state religions. The developers managed to introduce religion into this game in a way that will either make everybody happy or everyone equally mad. Aside from what tech advance allows you to found each religion, there is absolutely no functional difference between them. They each provide the same amount of culture and happiness in a city, allow the same buildings, and so on. Sid Meier has now indicated that no religion is better than any other. And Sid’s opinion is good enough for me.

Ooh! So much to do! Cities and great peoples, yes! So many options!

The Civilopedia in Civ III had one vast improvement over the one in Civ II – when you right-clicked on a unit or stack of units, one of the options in the menu that came up was to open the Civilopedia to the page with that unit. In fact, a lot of things had a little ‘C’ next to them, indicating that pertinent info was a click away.

But not so in Civilization IV. The only way I could get to the Civilopedia was to click on the book in the upper-right corner (which would invariably scroll the screen at least a little). It would then open up the page that shows all the tech advances (which is the first category in the list), or, even worse, the page of the last thing I was looking up. I do miss the right-click menus. Why did they have to go?

With Civilopedia like that, how can we look up our friends?

You don’t have any friends! Nobody likes you!

Master Sid is our friend. He entertains us, and teaches us. He likes us. We don’t need you.

Civilization IV is really a tremendous game. I bet though, if they made all the functional changes they did, but did not go 3D and made it closer to Civ III graphically, it would still be a rockin’ game. But, they did, and with the frequent disk swapping and occasional freeze ups for systems that actually meet or exceed minimum or even recommended system requirements, I was forced to knock a bit off in both the gameplay and fun departments.

Still this game will definitely earn its place in history as a worthy successor to one of the best strategy game series ever. The four and a half Gems it does earn is still the mark of a great game, and I would be surprised if it didn’t carry away some of our Game of the Year awards.