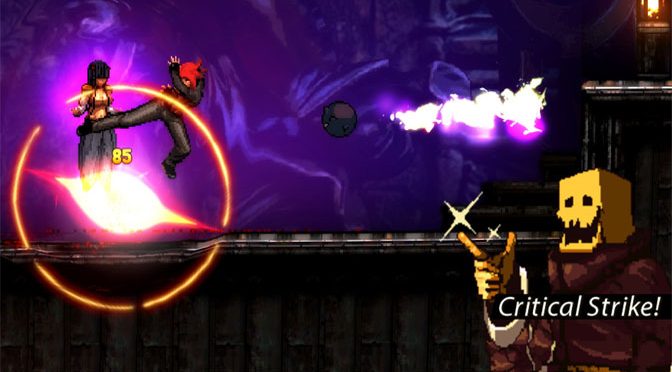 When approached to review Demoniaca, the differing genres this game was said to unite was immediately fascinating. Metroidvanias are one of my absolute favorite genres, especially known by any of those who read the Save State column, but add in beat ‘em up elements and a rock-inspired soundtrack? A developer couldn’t synthesize a game I’d be more sympathetic to than Demoniaca. So how effective is Demoniaca as a beat ‘em up Metroidvania? Let’s find out. 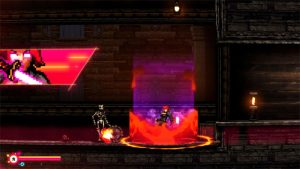 In Demoniaca, you control a woman who is the lone survivor of a demon attack on a village. Disemboweled and left for dead, she somehow survives due to the blood of slain demons mixing with her own and stitches herself back together for one solitary purpose: Revenge. Players of Demoniaca will be tasked with ascending the Tower of Babel and defeating the myriad demons that lie in way of you and your vendetta. Unfortunately, while there are an awful lot of text boxes in the game, the story presented is just incredibly unsatisfying – fans of JRPGs know about winning a boss battle but losing in the cutscene, and Demoniaca delivers a nonsensical gut punch without really giving the player any information to care about any of the events that transpired. 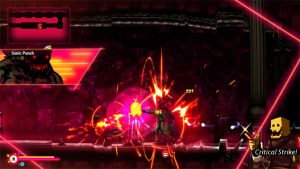 The Tower of Babel is actually designed quite similarly to what you’d expect from a Metroidvania, large passages, enemies to defeat, and various platforms to jump and wall kick your way around. As you progress, you’ll acquire a ground slam that opens up new areas, a double jump, and there are even doors that require you do enough damage in a short time frame to unlock them, which might require you come back much later after you have some level ups under your belt. The leveling system provides you with skill points each level up that you can apply to any of your stats you so choose, and there’s a fair amount of inventory management to do with loads of items being dropped by enemies as you progress through the game, too.

The combat itself is an interesting take on a 2D beat ‘em up: All of the face buttons are light/heavy punches and kicks, while block is on L2, and jump on R2, and no, the controls aren’t customizable. There are loads of fighting game inspired commands – in fact, there are dozens of special attacks you can perform and it’s pretty easy to get overwhelmed by how many options you’ll eventually have, as many of them are actually locked when you begin and must be unlocked as you progress through the game. Oddly, enemies suffer no hit stun from your blows, and sometimes the controls can feel unresponsive with you inputting an action you’ve done multiple times before just suddenly not working. Some enemies will also hit you with negative status effects, like poison, petrify, or a personal favorite, one that makes the game’s visuals look like a Gameboy. 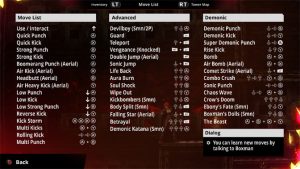 Demoniaca isn’t exactly a game where you’ll be belting out a variety of big, fancy combos. In fact, in most encounters, the player will have to bait out an attack, hit a few times, then back off, or just outright cheese the enemies by attacking from positions they can’t easily hit you from, themselves, because doing anything more would be tedious. Boss encounters really let the combat mechanics stretch their legs, because while regular enemies can just spam fast attacks ad infinitum (especially these knee kick guys at the end of the game), bosses will generally have some solid openings for you to abuse them, before you go back to sidestepping fireballs from off screen, or something. 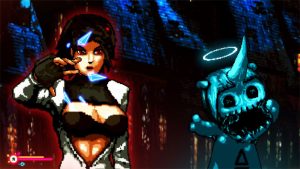 Visually speaking, Demoniaca is great. The main character doesn’t look like she’d be out of place in an older Fatal Fury game, with fluid animations that work very well to sell the game’s visual style. Demoniaca looks fantastic, with sharp pixel art and dark gothic designs that really sell the world as descending into a demon-infested hell. Each section of the tower you’re conquering has unique platforming segments, and while the backgrounds of each zone of the tower amount to little more than window dressing, each area will present you with enemies and platforming challenges you need to surmount in order to continue the game. 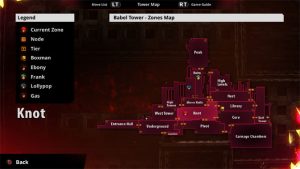 The first point of annoyance in Demoniaca is, unfortunately, in the platforming. The controls feel inaccurate while trying to jump around enemies onto small platforms, especially until you get used to them. Your wall jumps move in a specific arc with no air control on your part- it’s very similar to how your momentum is locked in jumps in old Castlevanias, so there will be times where you will jump onto a wall and need to wall jump onto a floating platform but you clung to the wall too low or too high, and will miss the platform due to your uncontrollable jump arc. There are even “leap of faith” segments where you have to make a jump, unable to see where you’re going to land, and if you jump too far, double jumped, or didn’t go far enough, you can find yourself falling down and needing to try all over again. 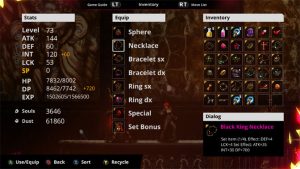 As the game goes on and the player encounters more and more enemies or bosses with huge amounts of health, using gear that provides HP regeneration can be very useful in prolonged fights, as with enough, you can recover from almost all damage quickly. Though, there are some bosses who can kill you in a single attack so, you know, it’s difficult to regenerate when there’s nothing left. There are also items that let you convert HP into demonic power so that you can spam super attacks against bosses, and if you’re lucky enough to find items that share a type, you can get a powerful set bonus that can make you stronger or harder to kill. 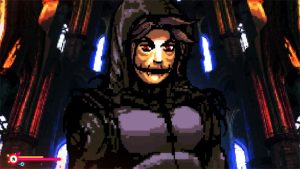 Of course, you don’t just get items as drops, you can spend the souls you acquire from enemies to buy gear from a capsule shop, or gain new moves from a shop run by a man with a cardboard box for a head. Since inventory space is limited, you can break down items you no longer need into another currency that another shopkeeper accepts for his rare items. The items in Demoniaca range from ones that boost your stats, some that provide obscene advantages or disadvantages, or even just ones that will reveal secrets on the map, which allows you even more opportunities to find treasure. 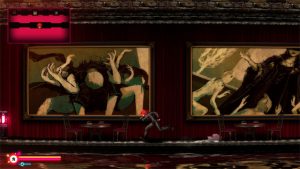 All in all, Demoniaca is a game that tries to marry together two different genres to varying levels of success. The game feels at its best when you’re in a boss fight, learning when to attack and when to dodge, but when you’re in platforming crawls in between, the game can feel like an absolute chore with copy and pasted enemies throughout corridors and jumping challenges with controls that are fiddly enough so as to make it not incredibly fun. There’s a solid gem of a game somewhere in Demoniaca, but there’s not enough polish to make it truly shine.