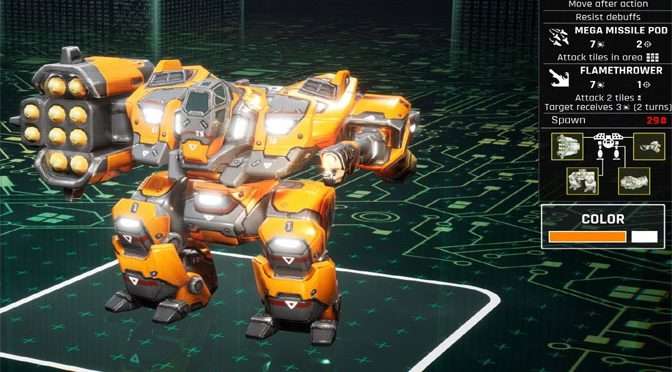 Like many of you, I love games where we get to command or even drive battle mechs. It really does not matter much to me if the interface is tactical like in BattleTech, or first person like in Mech Warrior 5: Mercenaries. Although, if truth be told, I am more of a fan of the tactical side of combat.

The problem that many of you mech combat lovers are probably facing is similar to my own. Mech games are fairly popular, but it’s not like we get new titles every week or even every month. And while a game like Mech Warrior 5 is constantly expanding like it did with the Legend of the Kestrel Lancers DLC, other titles like BattleTech seem to have finished producing any new content. I am happy that we got several good expansions for BattleTech, including the really excellent Urban Warfare DLC, but also a little frustrated that the developer has now more or less abandoned the game without first enabling official mod support through Steam – a move that would have ensured it was playable, and re-playable, for years to come. 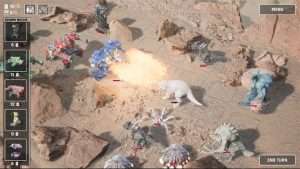 Thankfully, new mech based games are finally starting to get released again. Two relatively new ones will be the focus of our reviews on GiN this week. They are Mech Armada and Ignited Steel: Mech Tactics. Both are available on Steam feature tactical mech combat. And both are available for under $20. While both games share some similarities, the developers also take some very different core approaches when it comes to playing their games. 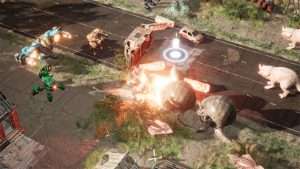 Let’s begin today with Mech Armada, created by independent studio Lioncode Games. The game has the thinnest of plots, but enough to justify being able to put giant killing robots out into the field without having to worry too much about whether or not you survive each battle with them. Basically, there is this hoard of mutants known as The Swarm who have totally taken over all of the Earth. Humans have moved into bunkers and underground cities and those who are left are relatively save in those fortresses while the mutants roam the surface. But one scientist has developed a way to create mechs using nanites, so long as there is enough power available (thus the main resource you will collect in the game are units of power). Your job will be to design powerful mechs using unlocked components and deploy them to fight The Swarm in a series of tactical battles.

The first thing that you will probably notice is that the world is really stacked against your makeshift mech army. The Swarm has had years to consolidate its gains and multiply its numbers. Starting out, you have little more than a turreted machine gun and another mech with a heavy cannon to try and fight them. Over time, you will need to develop or find new body, transport and weapon components in order to deploy increasingly powerful mechs. 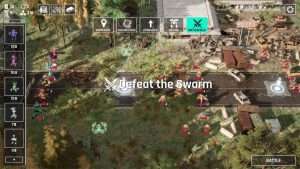 Battles are tactical with your mechs moving first and then the enemy taking their turn. Each enemy has at least one unique property which you will need to learn if you are going to effectively fight them. They might be able to launch an area of effect attack onto multiple squares in front of them, or they might spontaneously generate armor after they are hit which protects them for the rest of the turn if they are not outright killed. Some spawn new monsters if left alone. Others evolve over time into more powerful forms. The variety of enemies is impressive, although this does make the game fairly challenging to play, especially when you are just starting out. 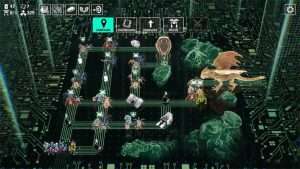 The overview map that you look at between battles is presented so that you can decide which path you want to take on your way to the inevitable boss fight at the far side. Some branches have more battles than others, while some have free components, power or other resources that you can just pick up by moving onto their space. You can’t go backwards on the path, so need to choose carefully which way you want to go to get the most out of your run. 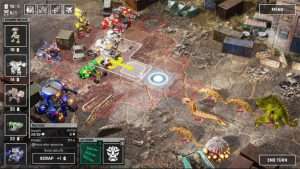 Mech Armada is definitely a rogue-like game, meaning that you will die a lot and have your progress reset. However, you don’t get totally sent back to square one when that happens. There is a special kind of energy that gets banked when you collect it, either on the main map or during a tactical battle. That energy basically equates to points that you can spend in order to tilt things a little bit more in your favor on the next run. That might mean unlocking more mech parts from the start, getting the ability to earn more resources after each battle, giving yourself more supplies to start with and many other special or rule-bending abilities. In a lot of ways, the mechanics of Mech Armada are similar to 2018’s Into the Breach, which also involved mech combat. It’s not a bad strategy in either game to just throw away a few runs and use them to gather the points or experience needed to make the game easier to play on subsequent runs. 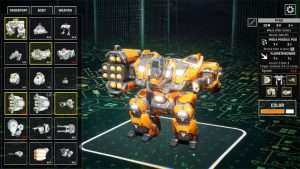 Mechanics aside, you will be spending most of your time in tactical battles. You have different objectives, though they are normally either to kill all of the mutants or to survive a certain number of enemy waves. The combat is enjoyable, but those of you who are used to massive scales in games like BattleTech may find the battlefields to be a bit constrained here. One I fought on was literally the size of a basketball court and a little parking lot. The ranges of your weapons are also quite small, normally only two squares for most of them. Eventually you can find or develop weapon components that shoot a bit farther, but still, it’s a very small tactical battle.

For a tactical combat gamer like me, I was a little disappointed with the smaller scale of the combat in Mech Armada. It’s even challenging to set up supporting fields of fire and things like that which normally equate to victory in games like this. And there is no overwatch mechanic, which is a big negative. You are basically forced to run up to enemies, unload all of your weapons and hope to either kill them or have enough hit points to withstand the inevitable counterattack. 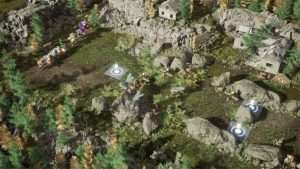 The game also kind of subtly forces you to move forward, even beyond the fact that you can’t overwatch. There are these little energy pods scattered throughout the map and if you jump on them with a mech, you can collect power which is used to generate new mechs or improve existing ones. So, you don’t technically have to capture those points, but if you don’t, then you will probably get overrun in subsequent battles when the difficulty ramps up. It’s quite the challenge to get a mech into position to collect the energy you need to build up your army without losing too many mechs in the process of doing that. And if you complete the objective before you collect that energy, it’s gone for good. This led to several instances of “ring around the rosy” where I had to kite the final mutant around while collecting that precious energy I needed before ending the combat. 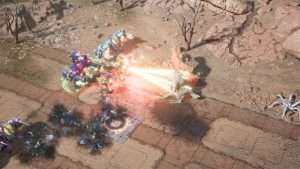 Graphically, Mech Armada is really good. It’s a little cartoony, but it has a nice style where everything is easy to see and distinguish. The sound is nothing to write home about, but the mutants do sound pretty scary at times, and the roar of your cannons is unmistakable. For an indie game, on balance, both the graphics and the sound are well done. 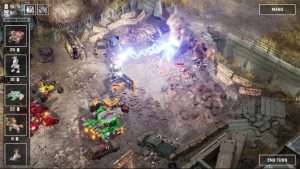 At under $20, Mech Armada offers a lot of good content for not a lot of money. They recently added a sandbox mode which lets you set up the perimeters of the game and tilt things in your favor with gobs of staring resources and whatever mech components you want. I found that the sandbox mode was very enjoyable. For once, it made me feel like my mechs were really powerful weapons without first having to grind through a bunch of failed runs first. It’s addition really ramps up the value of the game for those who would prefer to jump into the action without the grind.

Mech Armada earns a very good 4 GiN Gems out of 5 score. If you are looking for a lighter, rogue-like take on mech combat, give Mech Armada a shot.