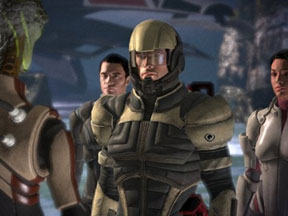 You have to give it to Bioware. They sure know how to make a good action role playing game. It started off with Knights of the Old Republic, which many consider to be the best Star Wars game ever made (and when you consider you’re going up against Tie Fighter and Jedi Outcast, that’s saying a lot.) Then they went on to Jade Empire which I admit I didn’t really get deeply involved with.

But now they are going back to the sci-fi realm with their release of Mass Effect, and even though this is Bioware’s last title before departing from Microsoft, it’s an impressive swan song for sci-fi buffs.

Mass Effect puts you in the control of Commander Sheppard (who can be either a male or female depending on your choices) and his crew aboard the Normandy.

Upon receiving a distress signal, they investigate the situation only to find out one of their own, a Spectre (elite military operative) named Saren has gone renegade and sets his plan into action to bring a race that long ago destroyed an entire civilization back into the fold.

Not only must Sheppard and his crew deal with Saren and its uprising, but he must also deal with the Citadel council. So you have action and bureaucracy, kind of like the first Knights of the Old Republic game.

The Citadel is the heart of all activity, and it’s here where Sheppard must prove his case to capture Saren, even to the point of becoming a Spectre himself.

Along the way he will team up with a crew of various races, including the Turian (the same race that Saren is, and are very prejudicial of humans,) Krogan (huge beast like hunters,) Asari (highly intelligent female humanoids,) and Quarians (humanoid aliens specializing in biotic spells.)

What makes Mass Effect work with the various races is that they are not the typical alien stereotypes we see in sci-fi fare like Star Trek. Each race has their own agenda, their own back storyline, and their own dialogue. A lot of work went into making each race as believable as they can be.

The main story focuses on Saren’s campaign, but along the way, Commander Sheppard can explore the entire galaxy to search for various items that will help his cause, or take part in side missions at the request of the many NPCs you will encounter. Given that this is an RPG, you know you are going to be taking the side quests, which help to extend the gameplay significantly.

All operations take part with a three man crew consisting of Sheppard and two other characters of your choice. Here you need to choose your companions wisely, a staple of BioWare type games. Some are more suited for the mission at hand, and some will fit more into your personal tastes and play style, making for an even deeper RPG experience.

Characters can be equipped with varying weapons but can only use the ones they have trained with. For instance, only the soldier class can use assault rifles. Varying classes can also use their skills in technical fielfdd to access their surroundings, or use biotic spells to help their allies or slaughter their enemies. Some of the biotics that are used really enhance combat tenfold. The only problem with the game’s combat engine is the AI can be rather suspect as I’ve noticed enemies just standing there begging to be shot at.

The main campaign can be finished in about ten hours in normal difficulty, but can be accessed again in both Hardcore and Insane modes. In addition, there are many other missions that can be explored all across the universe, thus increasing replay value as well as time spent playing the game originally. With a universe needing help out there, you can spend quite a while going over it with a fine tooth comb, if that is how you like to play. (And what RPGer doesn’t?)

Visually the worlds of Mass Effect are stunning, as are the characters themselves. The facial animation are unlike any other I have ever seen in a game, and it shows that a lot of work went into the project. The only problem with the visuals is that like other BioWare action RPGs, the frame rate can take a hit at times, sometimes getting so bad that it can hamper game play. But even the frame rate loss cannot detract from the overall beauty that the game shows. The same can be said in the voice acting, as it is some of the best I’ve heard in a game, featuring a cast including Seth Green, Keith David (who seems to be in every game out lately,) and Lance Henriksen (Bishop from Aliens.) An amazing score helps fit the overall audio package to full extent.

As many people who read GiN probably know, I don’t like role playing games very much. I can’t get into them when they are the same old routine. But when taking a whole new turn like BioWare did with Mass Effect, it truly keeps my attention.

In fact, this might be the first BioWare title that I was able to keep full interest in right until the very end. I wouldn’t be surprised to see Mass Effect win our Role Playing Game of the Year award. And it already earns 4 1/2 GiN Gems from me!