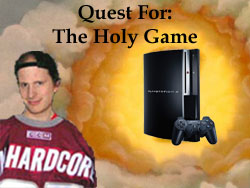 It's interesting that for a commentary with a title like Hell Freezes Over that here in the DC area we are hit with the first major snowfall of the new year. But the events that have occurred over the past week are a perfect sign of the end all, be all of my work here at GiN. I know in the past I have made many complaints about certain products, only to eventually join the mold and pick them up, and embrace them. Well it happened again, and I'm sure nobody saw this coming.

It all started with CES at the beginning of the year. As many of you know, I'm a huge fan of HD DVD, especially in terms of price and interactivity. Not to mention it works quite well on the Xbox 360. Plus there is a certain movie that I really enjoy called Transformers that was made HD exclusive via the Paramount/Dreamworks deal. Then there were the higher quality Warner titles such as 300 and Harry Potter and the Order of the Phoenix. The latter of which I was able to use to partake in a unique web community screening. It was something that I never experienced before and was hoping for more to come out.

On the other hand, Blu-Ray didn't have any of these features because they were just releasing their latest profile, and CES was debuting the latest profile (known as BD-Live) that would equal that of HD DVD, whose interactivity features were mandatory from day one.

But that wasn't the part of CES that hit me the most. It was what happened before the first day. Warner made an announcement that after May 2008 they would be going Blu-Ray exclusive. It was a major blow to me and fellow HD-DVD community members. But it was the start of a domino effect, as fellow houses in New Line and HBO (both owned by Time Warner) followed on the exclusivity bandwagon. There was even fear, uncertainty, and doubt about HD exclusive houses Paramount/Dreamworks and Universal jumping ship as well.

Needless to say I was in a flux. I didn't know what to do. I was, in a way, going under a suicide watch. Now before any of you start calling the authorities and have me put under protective custody, I did not even consider suicide at all, but I ended up doing something just as drastic, in terms of gamers like myself.

I considered a Blu-Ray player. But what I did in the end is going to shock all of those who know me. In fact, I can hear a "Dude!" coming from our resident Guitar Hero/Rock Band vixen after what I say I did"

*mumbles* I got a PlayStation 3.

I SAID I GOT A PLAYSTATION 3!

Yes you heard right. I drank the Kool-Aid and got a PlayStation 3. And no it's not just because of the whole Blu-Ray deal either. When the PS3 came out, I said the following in another commentary: "Would I end up buying a PlayStation 3? More than likely after some titles of interest come out."

And of course there is that one title called Metal Gear Solid 4 that I'm waiting for. The way I see it I can now review all three systems, and while my key preference will always be the 360. And any multiplatform titles I get will be picked up for the 360. At least this way I won't be out in the cold if there are any titles I really want to look at. Then again there is always the PC, but considering you have to upgrade almost every few months to play the latest titles (Crysis alone will make you upgrade almost every month) it's not worth the money or effort for me.

Ok everyone. Calm down. The truth is out. Deal with it.