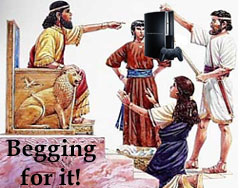 I know a lot of my friends as well as GiN readers who are going to kick me in the head for this column, but I've got to say that the bubble has popped. Those gamers who weren't buying into the hysteria of the PS3 are now coming around to the idea of spending their cash. What could be the main factors? In a word: Games.

Yes, thank goodness for great games, my friends, as they will be the only thing that will bring the PS3 back to the top of the industry. If I had to pick a system that has the most untapped potential in the gaming world, my hat would be tipped toward the PS3 without hesitation. The Wii has been a lot of fun and the Xbox has been doing a lot of stomping and grumbling, but when it comes down to it, the shine that comes off Sony's system is too bright to go ignored.

The thing that has been working against the system, however, is the lack of utilization regarding some of the platform's most anticipated games.

Don't' get me wrong, The Darkness was cool, and there have been a few more titles sprinkled in that make the PS3 somewhat appealing, but with the major titles coming out for 2008, its no wonder that people are starting to get the fever in some of the most cynical gaming circles.

First off, in my book at least, are the comings of two Konami favorites: Metal Gear 4 and Silent Hill 5. (Also, for those who have asked: Yes, I do have the Konami logo with a little heart next to it tattooed on my forehead.)

After a year of seeking out new peeks for both of these titles, I can say that the hype around these games had me peeking at owning a PS3 system long ago, but now with their coming, I'd say this, more than anything, is a main factor of why the PS3 was added to my entertainment setup last month.

There are other games that factor in as well, such as Resident Evil 5, GTA4, and, in the near future, God of War 3, but should a handful of quality game titles be enough to effect a mass procurement of PS3s?

The price drop helped, but not by much. There were no features added to newer models to speak of, so the only thing I can think of that has changed the battle grounds is the variety of anticipated games that are becoming available for the system.

Had the company come out with these games at the PS3's launch would there have been mass praise for the system rather than heaping criticism? No one can say for sure, but I'd postulate that it is a definite possibility.

Though the PS3 has had its fair share of critics, the system is actually quite engaging. The only flaw has been the price and the fact that it just hasn't had the gaming library to do that price tag justice. Hopefully, we'll see the end of this kind of problem in the next two years and the benefit of the PS3 will be worth the cash you have to sever off your bank account to obtain it.

As far as the future of gaming goes, the Wii hasn't announced anything particularly eye catching and doesn't seem to have much in the mix that will appeal to the overall community, Xbox 360 blew its money maker with Halo, but the PS3 has been holding back on its silver hammers, and now its seemingly releasing all its might in one blow.