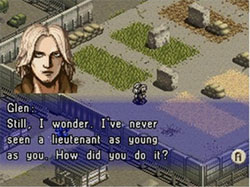 Front Mission for the DS is a revamped version of the first Front Mission which was released by Square Enix for the SuperNES in Japan only. Those of us in the States have only seen installments 3 and 4 for the Playstation and PS2 respectively.

Square Enix is no stranger to franchises, with Final Fantasy and the Mana series each running for well over a decade now, and Front Mission is no different. The depth of the game’s storyline revolves around the history between two fictional nations embroiled in political conflict, with you controlling armored tanks called wanzers in battle.

The gameplay introduces you as Royd Clive, an Oceania Community Union squadron leader. You are investigating a United States of the New Continent ammunitions dump on Huffman Island with your fiancÃƒÂ©e and the rest of your squad when a USN squad ambushes you, destroying your fiancÃƒÂ©e’s wanzer and leaving you in the fire of the dump.

The OCU is blamed for the incident, resulting in a war between the two nations. After leaving the defense force for sometime, you are reinstated to lead a group of OCU mercenaries with the opportunity of avenging your fiancÃƒÂ©e.

The gameplay is a classic turn-based RPG, with you operating several wanzers in battle against a number of enemy tanks. Missions consist of moving the wanzers around the battleground and engaging enemy tanks with a number of short and long-range weapons, varying from missile launchers to machine guns and straight up punches with your strong arm.

Battles can last upwards of an hour with each turn lasting several minutes. Luckily, save options are available at any time. The lengths of the battles result from the amount of strategy involved in fighting, largely based on how you set up your mech assault vehicle.

Your wanzer is fully customizable, with the ability to carry up to four different weapons, one on each hand and shoulder. Along with this are the armors available for arms, legs, and body, as well as items for increasing health and damage.

Not to mention the sweet color options available. I stuck with gun metal grey, although the blue was pretty stylish. The customization of the wanzers helps a great deal in the missions, and the importance of your choices will be evident in how your tank performs.

Customization only takes place between battles, while you move from city to city throughout Huffman Island. While resting in town, you also have the opportunity to buy new weapons and items, hang out at the bar, as well as make money. This is done in the arenas where you can pit your tank against others in the ring. Arena battles are your opportunity to fight without worrying about losing the war and they are important in gaining the cash needed for your new toys.

The game is played mostly from the touch screen, with you leading your wanzer over grids on the battlefield and tapping your choices from display lists, while the top screen displays information about your tanks current status.

Front Mission sports a classic RPG look and still represents the appearance of the SNES version. However, being on the DS, the graphics don’t look 12 years old. The animations on the battle scenes and cut scenes could have been spruced up a little, but overall the game is clean and plays solid.

The only thing I’m curious about is why they called the main protagonist Royd, when they put him in a super strong wanzer. By the way, I named my tank BONDS.