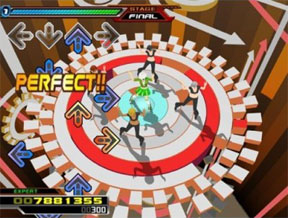 The pulsing rhythms of techno have never really had much affect on me. I can’t say that I’ve ever been driven to jump onto the dance floor for thumping kick drums and high pitched melodies. But ever since the craze of Dance Dance Revolution a few years ago, I have to say there has been some temptation to try it out. I could never face climbing onto the dance pad at the mall arcade to take on those champions of stomp. Maybe it’s the link between my obsession with Guitar Hero or just the sheer look of joy I see on the kid’s faces as they pound ground at the arcade, but I was slightly intrigued when DDR: Hottest Party showed up for review.

DDR: Hottest Party for the Wii is nicely designed for the console, making the jump from a large scale arcade to something that can fit in a bedroom. The pad follows the white color scheme of the console and plugs neatly into the Gamecube controller slot.

The Wii version of the game takes the dancing up a notch by throwing in hand movements along with your foot schematics. The full body dance workout now has you shaking your fists along with the beat if you like, but the use of the wiimote can be turned off if you wish to play with only your feet.

Everything reacts like it should, with the pad responding with good sensitivity and the wiimote shakes being picked up easily by the sensors.

The gameplay, however, is just not that fun. For me, I think it’s mainly the playlist that destroys this game. For a game that relies almost solely on its music, this is a serious issue. Most of the songs on the game are dance remixes of pop songs from artists including Coldplay, Jamiroquai, and Ciara. I have a difficult time making it through most of the original songs, and the addition of poor remixing makes them unbearable to play through.

I’m no expert on dance music, so I could be mistaken, but these seem like low budget remixes. The nice thing is most of the songs are very short, only lasting a minute or so, but for those who want to really get into DDR, this is disappointing. There’s no Free Bird remix for the DDR dedicated to master on expert.

The dancing itself is easy to follow on the lower difficulties, but can become extremely challenging and take a lot of practice on the higher difficulties.

Along with the standard arrows that direct where to step, other obstacles are thrown in to distract you, adding increased precision in your dancing as you move up in your abilities. The movement of the game still feels a little more like a stuttered running in place rather than dancing, but I can understand the addictive nature of rhythmically moving to the arrows. It’s still a bit too much work for me to want to exert when I’m play a video game. Something about sweating with a controller in my hand makes me a little queasy.

There are several modes that you can play through including the arcade mode to unlock songs and arenas, battle modes to challenge opponents, or go head to head with a friend if you have an extra pad.

The best mode for a game like this is the workout mode, where you can enter in your weight and time limits or target calories to burn. This mode makes use of endurance and plays for much longer periods of time rather than just playing one short song at a time.

While it’s not critical to a game like this, the graphics are not very good. The different stages are simple brightly colored geometric shapes, with no background environment.

The dancers are made up of the generic character classes and the dancing animations don’t match up at all with the stepping that you are doing on the mat.

Overall not that fun to watch, but as long as you’re playing the game you’ll be watching the scroll bar rather than the background, while any spectators are going to prefer laughing at you rather than stare at the screen.

If you’re a fan of DDR at the arcade, but haven’t gotten a previous edition for your home, this is something to look into, but if you’re looking for more songs to dance I wouldn’t waste the money. For those like me who have never stepped on into the DDR arena, try a couple tokens at your mall arcade before checking out the Hottest Party for Wii.