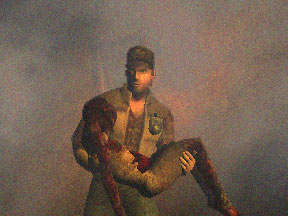 This Christmas, I was given the gift of horror, violence, and gore as my friend Bryan tossed Silent Hill: Origins my way. I spent the remaining hours of Christmas day hidden in a dark closet with my headphones attaching me to my PSP.

My love affair with Silent Hill started way back in 1999 when the first title hit the streets; however, it wasn’t until SH2 came out that I became completely engrossed in the franchise.

I think it’s fair to say that since that moment, SH2 has been the game against which all other horror titles are measured in terms of story and gameplay, and the SH franchise has become my example of the gaming industry’s paramount endeavor. Even the lowest ranked title in the series, SH4: The Room, got some really great reviews and made a lot of hardcore fans happy.

Origins for the PSP prequels all the games I have come to hold so dear. Though the fact that it was on the PSP wasn’t very reassuring. In the past, I’d found that titles produced for a secondary system didn’t usually turn out so well. Usually they were regarded as side projects and given an inadequate amount of attention, ultimately making the game feel second rate.

There were some plus sides to Origins, the most important of which being that unlike the last SH game made, Origins was started with the full intention of making it a part of the overall story.

So like all important things, I began this game with a balanced amount of hope and skepticism. This balance always gets tipped one way or another within the introduction of a game, and after completing Origin’s opening sequence, I was happy to find myself giving favor to hope.

The story for Origins weaves in perfectly with the SH timeline, but it also tells a very stand alone narrative of Travis Grady, a truck driver on a delivery, when he almost hits a little girl. Brakes screeching him to the side of the road, Grady investigates the area, only to find himself pulled into the nightmarish town of Silent Hill when he is confronted with the fiery house that started it all.

The gameplay in Origins is fairly simple in its execution: Run for too long and you get tired, find your way around different locations with the use of a map, solve riddles and puzzles, and kill any bad guys that get in your way.

However, SH has always added to these mainstays of survival horror games by adding in details that create the creepiest moods, and Origins carries on this tradition while staying firmly connected to the action that drives the game along.

During combat, the melee weapons are both the best and worst parts of the game; best because there are a few weapons that you’d like to keep with you at all times; and worst because there are weapons, like Packing Crates and Typewriters, that just make you stop awkwardly and say "Really? That’s what I’m using?"

Most of the weapons that you find in the game can only be used to deliver a few blows before they break in your hand, leaving you to choose another bludgeon or to use your bare mitts. There are also a number of firearms to choose from, with the inclusion of a shotgun, an assault rifle, and, if you’re lucky, a Tesla Rifle.

The foggy town of SH is split into the regular two realities thanks to the use of the town’s mirrors, which Grady travels through at certain points in the various levels. The visual of seeing the world your character is standing in and seeing the world his reflection is standing in is very intriguing, but this is only the beginning of the unique visuals found in Origins.

As for the look of the monsters, many of them, like Calibans and Ariels, come straight from the stage production of Shakespeare’s The Tempest. Also found in the game are enemies formed by Grady’s psyche, such as Straight-Jackets and Twobacks. In this way, the enemy list takes heavily from SH2.The details of all these characters are clearly visible thanks to the game’s graphics.

In-game visuals are spectacular for a handheld game, and an added thrill comes as you explore and revisit the streets of the original SH in more detail. I was worried about the PSP’s ability to deliver the right visual technique to satisfy the mood set by a SH game, but I was presently surprised. The grainy film aspect of the game is brought back with considerable flair, and the stylish camera angles set my heart aflutter.

And if the in-game graphics and cut scenes were good, the movies were amazing! There was a point during one of the ending movies that I could have sworn I was looking at live-action footage. Good stuff all around.

The replay value for this game is sky high. Aside from all the extra gaming features that are found after your first run, there are several story details that become more and more defined and understood as you get through the initial excitement of playing the game. Also, there are three endings for Origins-the Good, the Bad, and the return of the UFO ending-each of which are worth playing the game again by themselves.

The only thing that seems to be missing is Robbie.

Overall, Origins is fully involved in the storyline, thematic vibe, and the visual style that has made the Silent Hill series the hands down greatest gaming franchise ever known to man. Taking from a number of literary and pop-culture sources, and from its own lineage, Origins is the greatest game for the PSP thus far, my pick for PSP game of the year, a very fine addition in the SH timeline, and the perfect thing to get you worked up for the coming of Silent Hill V.

Five out of five GiN Gems are awarded here, without question.