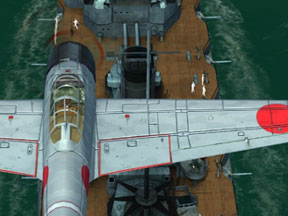 (And we do mean ALL Guns)

When it comes to World War II style games, it seems that all I play are shooters such as Call of Duty and Medal of Honor. After all, that seems to be the only WWII titles that are ever released on consoles.

Sure there are the complicated strategy games that we see on the PC, but not many have translated over to the console market well.

Then of course, there are the "control any unit" style wargames such as the Battlefield series. However they seem to take the feel more of a mindless shooter without any true sign of strategy. Aside from the common factor of "hold all the control points and lower the enemy reinforcements," there is normally nothing else in terms of a true objective.

Thankfully what Eidos did with Battlestations: Midway moves away from this model into the realm of the incredible. It’s able to incorporate a true World War II strategy title with the thrill of being able to control any air or naval unit available.

But one thing is for sure, Midway is not for those who want to jump in and get right into naval combat. There is a lengthy, and rather tedious, training academy that explains all the concepts of the game through eleven different objectives, from controlling a single naval ship, to maintaining damage control, to firing weapons, all the way to leading a fleet. It takes a long time and has a steep learning curve.

As well as the training missions, there are also several sets of challenge missions that center on a different type of vehicle in combat. The ship challenges test a naval commander’s skill at operating carriers, battleships, and PT boats, while submarine challenges test the mettle of the most hardened sub commander, but my personal favorites are the plane challenges, which allow players to command a squadron of fighters or bombers as they attack or defend their required targets.

And then of course there is the main US Campaign, which centers on Lieutenant Henry Walker, starting his military career as a PT boat captain right before the invasion of Pearl Harbor. As the war progresses, and culminates during the famous Battle of Midway, Walker will be in charge of a massive carrier group in what could be the turning point of the Pacific War.

Over the course of the campaign, proper resource management will be a must, as well as consistent planning on the overall map screen. But the key feature on the map screen is that any unit can be accessed and controlled on its own. Whether it is a crippled Japanese Zero or even the battleship Yamato, any unit is fair game.

Micromanagement will also come into play. Naval units will become damaged, and it will become necessary to direct crewmen to repair key elements (such as the engines, navigation, or weaponry,) stop fires, or control potential flooding from torpedo hits. Keeping an eye on such issues might make the difference between success or failure, or life or death really.

Battlestations’ gameplay does give the true feel of actually being in the Pacific War and it sure looks the part. All of the craft, air and naval, look identical to their 1942 counterparts and the visual quality is stunning.

Sadly there are some instances of slowdown when the action really starts to intensify on the 360, though the PC seems safe from this, but even on the 360 it’s nothing that will critically hamper overall gameplay.

The audio quality is also representative of the time period. Voice acting is done quite well, even for those who are based on historical personalities. JFK on board PT 109 will lead your squadron to battle in one early mission for instance. And for those who favor historical integrity, the dialog for the Japanese Empire is kept in their native language, complete with subtitles. I’ve always favored that in WWII shooters such as Call of Duty and I’m glad to see it carry over to this game.

Battlestations is truly designed to be played on Xbox Live, and nothing will beat the sensation of doing a bombing run on a Japanese aircraft carrier with several of your Live friends. It will be interesting how Eidos continues the series with new content.

Overall, Battlestations Midway has a very strong learning curve, and will take a lot of time to get a feel of all the mechanics, but in the end the combination of tactical naval strategy and the "you are there" action will please even the most hardened Pacific War Veteran. And with the advantages of Xbox Live, it will definitely take off in terms of online warfare!