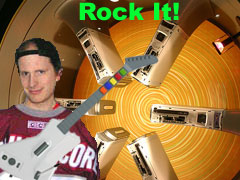 When my copy of Guitar Hero II arrived for review last week, I was looking forward to playing it again. I may have gone through it on my aging PlayStation 2, but the move to the 360 was way too much for me to resist. The high definition graphics, taking full advantage of Dolby Digital, and a new Gibson X-Plorer guitar controller (featuring a unique expansion port) was a welcome sight.

Need I even mention the ten new music tracks made exclusive to the Xbox 360 version? I didn't think so.

Of course, going through the initial 48 tracks (plus all the bonus songs) was a breeze on Medium difficulty, and I would still need to go through Easy mode to get my achievements updated, but what I was also looking forward to was the proposed downloadable songs that would be available on the Xbox Live Marketplace?

I will give RedOctane and Activision credit about getting the song packs out as quickly as they did. I expected it to be about a month or two before we got our first taste of extra songs, but much to my surprise that is not the case. When I saw that there were three song packs available for download, I was almost ready to get them and play some of the classic songs from the first game.

PACK 1: Bark at the Moon: Ozzy Osbourne, Hey You: The Exiles and Ace of Spades: Motorhead.

PACK 2: Killer Queen: Queen, Take It Off: The Donnas, and Frankenstein: The Edgar Winter Group

And then it hit me. The song packs included tracks that I didn't really want. Of the three available packs, I would have easily picked the first one, which included Bark at the Moon (Ozzy Osbourne,) Hey You (the Exiles, which I could care less about), and my personal favorite, Ace of Spades from Motorhead.

The second track would also be interesting for me, as it includes Killer Queen (Queen,) Take It Off (The Donnas,) and Frankenstein (The Edgar Winter Group.) As for the final song pack, the only song that would interest me in the least would be Higher Ground (Red Hot Chili Peppers,) as I could care less about Infected (Bad Religion) and Stellar (Incubus.) I really wished that RedOctane and Activision would have made some better choices in their song packs, but I guess they wanted to include less popular songs in order to equal the number of downloads between song packs.

But that is not what upsets me the most about the new downloads, but rather the cost of each song pack: 500 Microsoft Points, which is $6.25! That goes for about $2.08 per song! I don't get it. When Konami offered songs on Dance Dance Revolution Universe, they went for only 100 points ($1.25) each. But still, why are the songs on Guitar Hero II more expensive, even when bundled?

Yes I know the recording industry needs to be taken care of in terms of royalties and music licenses, but still, the songs are performed by cover artists. If they were master tracks, as some of the songs from Guitar Hero II are, then I could understand the pricing, but this is way too much for a cover band.

Already Microsoft fanboys are giving a lot of heat for the high pricing, but this time I can understand why, and hopefully these prices will go down. Of course I know there are a few fanboys out there who are going off on me after my take on Lumines Plus, but we are comparing apples to oranges: a full gaming pack that would cost $30 on a PSP (Lumines Plus) compared to downloadable extras (Guitar Hero II Songpacks.)

This is not another Oblivion horse armor situation (the lamest of the expansion packs) but it is still way too much for song downloads. Should the price go down to 250 points per song pack, then I might consider it.

In the meantime I decided to use my Microsoft Points to download the impressive Boom Boom Rocket (EA's first foray into Xbox Live Arcade compliments of Bizarre Creations.) It's 800 Microsoft Points ($10,) but well worth it!