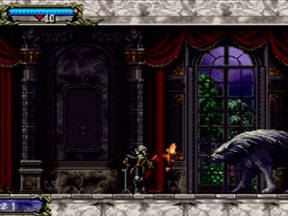 Castlevania: Symphony
Of The Night

I find it hard to believe that the PlayStation version of Castlevania: Symphony of the Night is actually 10 years old. I still remember the first time I played this amazing game, how impressed I was with the level structure, the addicting 2D gameplay, the smooth animation, and just the coolness of a main character that is not part of the Belmont bloodline. And all this on a system that was designed to only play games in 3D?

Nonetheless, the Symphony style gameplay became the norm for most of the more recent Castlevania games, particularly those on the Game Boy Advance and the Nintendo DS, and all for good reason. The linear structure of the past games were long gone and the day of the action RPG have taken over.

Now in 2007, there are two planned re-releases of this amazing title. The PSP will get a remake that will actually include the game’s prequel: Dracula X: Rondo of Blood, while the Xbox 360 now has a port of the original PlayStation game available on Xbox Live Arcade.

In addition, at about 82 MB, this makes the first Live Arcade download to actually break the original 50 MB size cap, and in doing so, Konami is able to make the Live Arcade port of Symphony as authentic as possible. Well except for a few FMV cutscenes.

Symphony actually begins with a back story. Replaying the final battle from Rondo of Blood, we are taken back to 1792, and Richter Belmont has finally arrived at Dracula’s Inner Sanctum. A fierce battle ensues, and Richter is successful. But four years after the battle, Richter mysteriously vanishes.

Enter Adrian Farenheit Tepes, also known as Alucard, son of both Dracula and a human mother who was burned at the stake for heresy. Heeding his mother’s last words, Alucard turned against the ways of his father and affiliated himself with humans.

The last time he assisted humans was back in 1476 when he assisted Trevor Belmont in defeating Dracula (as seen in Castlevania 3: Dracula’s Curse on the NES.) Since then he had entered a long sleep to stop his bloodline, but awoken after Richter’s disappearance to investigate the matter.

Anyone who has played any Castlevania title after 1997, Symphony included, will not need an explanation of the gameplay, but for those who haven’t (shame on you,) the series centers on exploration and leveling up Alucard’s stats via experience and new weaponry. And of course that includes fighting some of the more famous Castlevania villains, such as zombies, mermen, the Doppleganger (a ghost clone of Alucard,) Death, the dark priest Shaft, and of course, Dracula himself.

The amazing details of the PlayStation version are brought back completely intact for Xbox Live Arcade. The technology might look a little outdated but pixel filtering (used a lot on console emulation) helps smooth the graphics out. However, nothing can be smoother than Alucard’s animation. What was considered the best animated 2D character in gaming history still maintains his visual prowess. Symphony has aged quite well!

In addition, the soundtrack has been considered one of the best in the entire series (and we’re talking about a series with 25 games in it, including one cancelled Dreamcast project.) It sounds equally impressive on Live, but the sound levels seem a little muffled on a surround sound system. The voice acting was infamous, and still is to this day. Who could ever forget how dorky Richter sounded when he first said "Die monster! You don’t belong in this world!" Still it is camp in its own way, just like the original Resident Evil, and why should we ever change that?

Symphony is very affordable on Live Arcade, only costing 800 Microsoft Points (approximately $10.) Obviously this is a must download, especially for anyone who loves such a memorable series, especially the best part of it! Now if Microsoft can only convince Konami to release Rondo of Blood for Live Arcade!