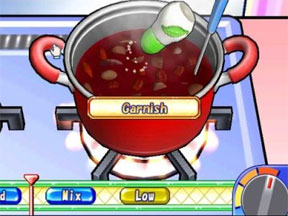 There’s nothing I like better in the morning than waking up and making a nice plate of scrambled eggs. I’m talking about cartoon eggs of course, because I don’t do dishes. And so thankfully I now have Cooking Mama: Cook Off for Nintedo Wii, and life is much better. No mess, no clean-up, just the awesome experience of cracking open a few eggs with my Wiimote and throwing them in my television’s cooking pan.

If you’re looking for a game that takes advantage of the Wiimote to reenact motions like cutting up veggies and turning on the stove, Cooking Mama is for you. The range of motions which you end up going through is limited, with most being quick flicks of the wrist for things like cutting, opening cans, and breaking eggs, or some spinning motions for stirring.

However, the game does a very good job of accurately miming these actions and removing the frustration of bad controls which many games released for Wii have had so far. In a way, its like actually working with utensils.

As far as bringing forth a game that keeps you wanting more, Cooking Mama lacks in intriguing game play. Repetitive cooking actions get tiresome after a short time and some of the longer recipes can make for a long, boring time. Adding to this is the points system which gets difficult to perfect, making the game arduous if you want to complete it 100 percent.

Sorry there Mr. Spaghetti in Squid Ink Sauce, but you take way too long to prepare to attempt getting a gold medal. If you do love fake cooking, the game does offer a wide variety of over 250 foods to create 55 real recipes from around the world, which is nice since replaying most of these meals isn’t worth the effort.

Cook Off does offer a few new things that make it worth picking up if you already own Cooking Mama for the DS. There is a Cooking with Friends mode which feels like "Throwdown with Bobby Flay," where you take on your new friends from around the world in their own recipes. And if they’re not good enough for you, Master Chef, then you can take on your own friends in head-to-head mode.

Now you can finally settle the score of who can make better popcorn.

The graphics and sounds aren’t very expansive, but have a nice cartoon feel like many games that come out of Japan. I much prefer my mama yelling at me for screwing something up when she has a Japanese accent, but she can get a little scary when flames are coming from her eyes.

Being a cooking game though, most of the food does not make my mouth water and I know that it’s possible for cartoon food to do that. Don’t tell me the pizza on old TMNT didn’t look awesome.

The game doesn’t provide much of a soundtrack, which is disappointing since that’s something that can really turn a game like this into a lot more fun. Only a few tracks of what sounds like old western piano music plays throughout your cooking experience.

Overall, Cooking Mama is a fun game that offers up interesting recipes that you can practice in the safety of your Wii without worrying about the mess of cleaning up after you overcook your food. It’s definitely worth picking up for your kids or for yourself if you want to at least pretend to cook while you call up Domino’s.

This cooking title serves up a respectable 3.5 GiN Gems.