Hey all I’m back with a very different sort of game from the usual for me. It’s Arcade Spirits, a romantic visual novel!

Plot: The plot is pretty good, taking place in an alternate world where the video game crash of 1983 never happened, and arcades are still a big thing in the West. While I didn’t 100 percent completion the game I did enjoy my time with Arcade Spirits, even if it was vastly different from my usual fare. 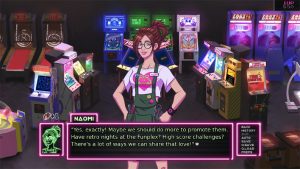 Gameplay: This is a more traditional visual novel in that you create a character for yourself instead of the main character being pre-established like you might see in a visual novel like Fate/Stay Night with Emiya Shirou as the protagonist. That all being said, it’s still very much a romance game, and it’s mainly focused around building up those romantic relationships with the character or characters of your choice. 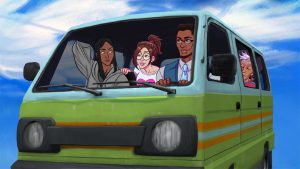 There are other parts, where you take care of an arcade you own and try to grow it, but it’s not the main focus of the game. Still, the inclusion of the arcade building was a nice twist that should really bring the game home for a lot of players, especially those who grew up when arcades were actually a thing. One wonders if arcades would really still be popular without the 1983 crash, but at least that plot makes a nice backdrop for the main romantic plotline. 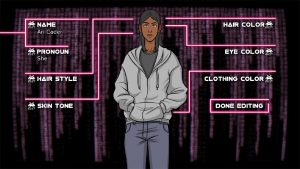 I do want to make one specific note about the character creation process that is a very good thing. Arcade Spirits is very inclusive when it comes to the LGBT aspects of the game’s characters, as well as the relationships that you can form. Not every romance-based game includes everyone, and it’s great to see that Arcade Spirits really does. 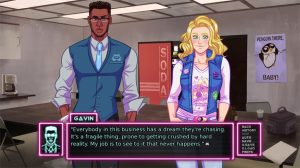 Artwork: The artwork is pretty good, but if you were looking for a more anime art style, you will be disappointed. If that doesn’t matter to you, or isn’t what you are looking for though, you’ll be satisfied with the art. Just don’t expect amazing still frame landscapes like you might see in a more traditional Japanese-style visual novel, at least one with a higher budget. 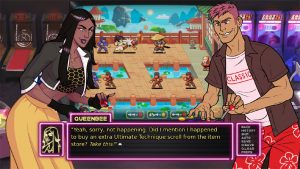 Music: The music is okay, it’s not the best there is, but most visual novels aren’t stellar when it comes to musical scores, though there are of course exceptions out there. The one good side of the audio portion of the visual novel is the voice acting, which includes some rather well known names from the gaming industry including Mark Meer who voiced Male Shepard from the original Mass Effect trilogy.

Overall: Arcade Spirits is a solid, if not exactly exciting or heart-pounding, romantic visual novel. 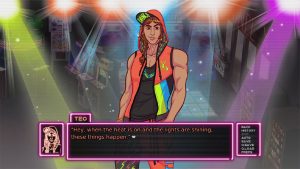 For those who love visual novels this may be up their alley, though those looking for more Japanese style visual novels will be disappointed. The alternate history and classic arcade plot adds some good flavor, and helps to shift Arcade Spirits away from the pack of visual novels out there in what is becoming an increasingly popular genre with no signs of slowing down.