Hey all I’m back with the fourth entry in James Cook’s journey across the stars. It’s From the Black, The Free Fleet Book 04, by Michael Chatfield!

Plot: This is the entry where things really started to hit the fan compared to previous books, and while I can’t say much more, if the darker tones from the previous entries wasn’t enough for you before it’s much more prevalent in this entry.

Editor’s Note: We are reviewing the entire Free Fleet series. Check out our reviews of The Recruitment: Rise of the Free Fleet, Coming Home, and No Rest for the Wicked. 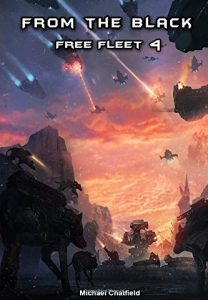 Personally I don’t tend to enjoy it, since it seems too contrived for many stories I’ve read or listened to, but somehow From the Black managed to keep me engaged enough not to want to throw my iPod through the nearest window in utter disgust at the plot. That being said if you want a lighter story it’s become very clear that The Free Fleet isn’t the series you’re looking for.

Characters: There was some much needed character growth that happens with James in this entry, although the lead up to this particular point was incredibly obvious to me. Whether James continues to grow is another matter, but he has yet to topple Yasu from being my favorite character in the series thus far. The rest of the cast does well, but the tone of this entry was much darker and it showed in the characters.

Overall: If you can stand the darker tone, From the Black will keep you engaged, but if that isn’t the case, you would be better off dropping the Free Fleet series now, as I can only see it getting darker from here on.