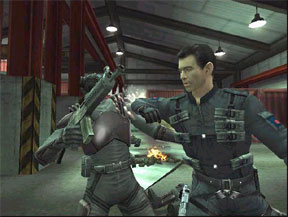 Since acquiring the James Bond 007 license a few years ago, EA Games still has one obstacle to overcome: to live up to the standards of the N64 classic Goldeneye. The previous two Bond games (Agent Under Fire and Nightfire) attempted the first person route with limited success, and all that Goldeneye could do is look down and laugh.

With 007: Everything or Nothing, EA’s latest Bond release, the first person shooter genre is ditched in place of a third person adventure title. While the change in perspective might not easily overthrow Goldeneye for the Bond game crown, it comes pretty darn close.

EON’s storyline centers on the field of nanotechnology. One of Oxford’s top scientists in nanotechnology, Dr. Katya Nadanova (voiced and face-scanned by Heidi Klum) is reported missing, as is her technology. Fear that it could be used in the wrong manner causes James Bond (Pierce Brosnan) to travel to Egypt to locate the rogues responsible.

Enter Nikolai Diavolo (Willem Dafoe), a former KGB officer who is disgruntled by how Russia has changed since the Cold War. Diavolo hopes to acquire the nanotechnology that Katya has developed to return Russia to its original Communist state. There is also a personal matter for Diavolo, as his mentor was none other than Max Zorin (from A View to a Kill).

Along the course of his mission, Bond will meet up with Serena St. Germaine (the always hot Shannon Elizabeth), a geologist who was working with another 00 agent in South America, as well as undercover NSA Agent Mya Starling (Mya). Of course, MI6 associate M (Dame Judi Dench) and Q (John Cleese) will be providing guidance as well. As mentioned before, EON abandons the first person shooter from before in favor of a third person perspective similar to that in Max Payne.

Personally I find the new perspective works great for a game of this quality. While I did have some trouble with some of the control, namely switching weapons and gadgets with the D-Pad, the other controls responded well. A Dead-to-Rights style lock on system is used as well, but unlike its namesake, you can actually see who you are locked onto, and can even use the right analog stick for precise aiming (vital for head shots while hiding for cover).

The new perspective also adds a feeling of stealth which will also prove useful, but also causes a glaring flaw with one of Q’s toys: the Q Spider. What I thought will help out as a reconnaissance tool against foes backfires when a room appears empty, but all of a sudden when Bond enters he is ambushed by foes who appear out of nowhere. I only wish that EA could have taken this into consideration, because otherwise the AI is quite good (seeking cover and limiting their exposure when firing is common).

Vehicular combat is also abundant, and quite enjoyable. While some stages feel like clones of either Grand Theft Auto (get in a car, drive from point A to point B while wasting any threats), there are also some enjoyable racing sequences and one of the most thrilling motorcycle chases ever in a game. We can thank the Need for Speed Underground engine for the smooth driving action, and I’d love to see more of it soon.

From the cast listing, EA went all out. When Nightfire was released last year, Pierce Brosnan did reprise his 007 role, but in appearance only. The voice however was a different story, and the less said, the better. This time around, Brosnan provides both the face scan and the voice, and the improvement is greatly appreciated. The rest of the cast is also used via voice and facial scans, and the quality is quite high, especially in Dafoe’s character of Diavolo. We’ve seen him play great villains before (who could forget his double personality Green Goblin role), and Diavolo lives up to that reputation. Shannon Elizabeth’s St. Germaine character provides standard Bond girl appeal that we know and love, as does Klum’s role as Katya. Even Bond’s most popular nemesis Jaws (Richard “EEGAH” Kiel in facial scan only) makes a shocking return.

The only weak character I could see was Mya’s role of Agent Starling. Personally I could see her character removed from the storyline and it would still be complete (though her opening theme song was quite impressive).

Visually the game is impressive, particular in the main character models and scenery. However, I can not get over the fact the game runs only at 30 frames per second, and even at that level there is some nasty slowdown at times (even on the Xbox). While the PlayStation 2 version is the only one to include online play, both the GameCube and Xbox versions do include split screen co-op play. In addition, with trying to unlock hidden features by obtaining gold medals, the game’s replay value is quite high.

Everything or Nothing might not be able to beat Goldeneye as the best Bond game ever made, but its unique blend of action, stealth, and vehicular combat makes a great change from the old first person formula. EA is definitely on the right tack with this one, and hopefully the next Bond release will be even better. I just hope they fix the Q spiders in the process.