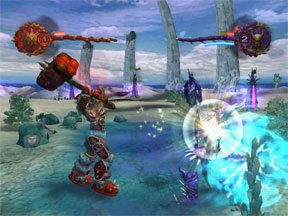 I think I both love and hate this game. Boldly straddling the line of a turned based strategy and fighting games, Wrath Unleashed will draw inevitable comparisons to the classic Archon that it strongly reminded me of. That just goes to show how old I am, since I can remember playing it on my commodore 64, a machine most young people today, in fact probably my editor, will never have known.

Much like Tim Burtons re-imaging of "Planet of the Apes" the new version is heads and tails better visually. The graphics are stunning, and anything that has the voice talents of Mako, of Conan and Samurai Jack fame gets big pluses in my book. On the other hand the original has a particular place of fondness I just can’t give the new. Possibly because the game keeps kicking my butt.

I started with the tutorial, which laid out how to change the view, maneuver the forces on the board, what terrain does for you and how to win. It was easy to follow and the only complaint I had is when they are finished giving the grand tour they dump you into battle with no discussion on which button to push to hand your opponent his spleen. Fortunately, on the main screen there is the option for ‘versus’ the mode where you can practice with your elemental cephalopods and adepts- which is some kind of rhino with a swivel head.

There are other modes of play. Campaign mode starts with vignettes that parcel out bits of the background story of the four overlords you can play. They correspond with the four classic elements of fire and water (the good guys) and air and metal/earth (evil and dressed to kill). I’d like to be able to report on the complexities of the higher levels, but remember me mentioning being spanked like a baby and left crying for momma? This would be where the tears fell.

Which made my favorite mode Battle and Team Battle. An army builder lets you customize your forces that best match your fighting strengths. Personally I favor the Genie with the twirling death stick. Once I made my ultimate army I was unstoppable against the victim I had lured into playing team battle. Oh the carnage! Oh the humanity!

My husband/playmate thought it was too much like real life; the craftiest of strategies and most elegant of battle plans didn’t survive first contact with the enemy. I take that as a compliment, since I was the enemy. He was just sore I kept transforming the lands to my advantage and didn’t get riled up when he let lose with the wrath and vaporized my soldiers, the punk.

The character models and animations in the game are well done. Unfortunately in world map mode the game doesn’t allow you to zoom in very far so the details get lost and many units end up looking alike. In arena mode the views are much clearer though the area feels small to me. Details, like spikes and lava spouts which are as dangerous as your opponent, are fantastic.

Soundwise, the overall ambience was appropriately epic, if a bit repetitive; but then I’m spoiled by games like Morrowind with sound tracks I just never tire of. There is no option to play custom music. This didn’t bother me, but the gracious test dummy (I mean my husband) I used mentioned it would have been nice. As for the sound effects, well…one death throw sounds like any other doesn’t it?

Overall it is a solid, playable and replayable game. Not so adrenaline pumping you can’t catch your breath and not so cerebral you can’t stay awake. Is there an ESRB rating for pre-old fogey games? This one is rated "T" for teen, which is most likely because the females flit around wearing pasties.