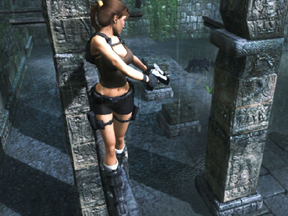 And She's Getting' Dirty

Lara Croft, one of the iconic babes of the video game world, is back in Tomb Raider Underworld. The game opens with a recap of the storyline and I was thankful of that cause my memory is not very good.

The action heats up right away as Lara’s lovely mansion is torched and you have to get her butt out of there. But stop right there, the game then takes you back to the middle of the Mediterranean Sea where the sea floor is your destination. Dive off the boat and start plundering for hidden treasures in a submerged temple.

This required a bit of exploring the vast and dangerous deep. I soon encountered the first puzzle, which to my amazement was rather easy to figure out and complete. I was shocked, because past Tomb Raider games involved puzzles so bloody complex that a guide or active Internet connection was required.

If I ever was confused about what to do next I could go in and get a hint as to what I should be doing via Lara’s handy dandy PDA. The first fight/ battle was not really what you would think. A huge, rather lazy, blind octopus stands in your way. Actually he is seated or whatever you would say an octopus does. Drop a spiked chandelier type object onto his noggin and Ta-Da the path is revealed.

It does not take long before you find out your objective and that is Thor’s gauntlet. This time the storyline is thick in Norse mythology mingled with the story of Lara’s mother who’s been AWOL for a bit. That may not be the right term considering your pretty certain that Mom is dead but then you/ Lara find some clues that lead you to believe that she is alive. I’ll stop there story wise as to not give any spoilers.

I was again cursing the camera, which you have control of, up to certain points. I was constantly finding myself talking to" well myself asking why can I not look right over there. Lara’s little PDA included the hint feature I talked about earlier, also included a sonar map (never really found a use for it though), and a tracking system for the treasures on the level. What would be nice to see is a GPS type system on that little PDA cause I was rather lost at times.

The combat system was improved a bit, mainly the hand to hand. The guns are nice and the targeting system is pretty accurate.

Other than the camera, I have two other complaints with this game. The first one being the game freezing up. It happened on two different 360s we tested the game out on. Thankfully, loading the game onto the hard drive helped this problem.

The last one is if I press up and jump, it means I want the character to jump up on the ledge or block. Not that I want to grasp onto the surface like a spider monkey. I wondered when Lara was bit by a radioactive spider because she was at one with her spidey senses!

I really enjoyed the variety in locations. I found myself immersed in an adventure that took me from scuba diving with sharks in the depths of the sea, to racing through a jungle on one of the meanest motorcycles ever, to plundering trap filled tombs, and that’s just the tip of the iceberg. I was a little disappointed in the variety of enemies though. The same ones seemed to show up in every level with the exception of one of Laras’ oldest nemesis. It seemed to me that the focus of the developers was more toward the exploration aspect of the game. Though this is a linear game, some of the locations are so massive, that they have a truly open-world feel.

I do recommend trying out this new addition to the Tomb Raider family. A game with a good storyline and pretty fun game play is always worth a shot in my book. The few flaws I found did not tarnish the overall enjoyment in the game and I was impressed with Lara’s most recent facelift.

Several new reactionary animations such as shielding her face when in close proximity to heat and actually getting dirty from the adventure, make Lara all the more believable and in the long run, more memorable. Let’s hope this bodes well for your favorite heroine in the future.