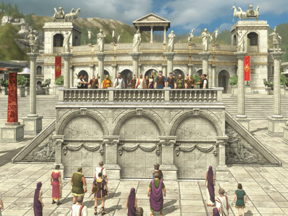 Once upon a time, strategy games set in Rome were like what the American Indians used to say about buffalo – they used to roam (and I didn’t mean to make that pun) the plains as far as the eye could see. In fact one major metropolitan newspaper I used to write reviews for had me conduct a roundup of new Roman-themed games, which was easy given that three were released within a month of each other.

Now it seems the genre has cooled off a bit, though it may be heating up again with the release of Grand Ages Rome for the PC, a title that in many ways beats all those others I have previously looked at.

Most Rome based games that I have played and reviewed combine city building with military conquest. A few concentrate strictly on one aspect or the other, though this does not really show the two sides of Rome: its huge impact on culture and its military legend. The fact is that without either one, the Roman Empire wouldn’t have existed, or at least not been the juggernaut that dominated its age in history.

Thankfully, Grand Ages Rome concentrates on both aspects of ancient Rome, and this balance is the key to its success over most of the other twenty or so Roman titles I have seen over the years. Here you get a good amount of city building, but aren’t forced to micromanage so much that you can’t run an effective military campaign. In Grand Ages Rome, the city is more or less in place to support the military, but can run just fine when its leader (you) are off fighting with the troops.

I have seen a ton of different ways to build and manage Roman cities in games. Many of them involve constructing roads and making sure that plebs push carts around to shuffle goods throughout a city. Some even require a higher (and rather ridiculous level) of management where you need to make sure that inns are stocked when the workers get hungry at night, which means making sure goods are delivered at certain times. The problem is that while this works for a neighborhood or two, when you multiply this by any good sized city, you end up having to solely concentrate on mundane tasks, which doesn’t make you feel like an Emperor at all. In some games you even have to worry about hiring enough street sweepers to clean up after messy citizens.

Grand Ages Rome makes most of the daily processes within a city automatic without taking away the fun of planning a great metropolis. The way it works is that buildings have ranges which are displayed in a circle around them. So long as complimenting buildings sit nearby, the people will figure out what to do with them. For example, if you establish a mine near a resource, you only need to put up worker housing nearby to get people to start working there. The same goes for food production. You can have a worker house, a pig farm and a butcher within the circle and the people will raise food, prepare it at the butcher and make sure to eat it as well. This process works because the radiuses are rather large, which makes sense given the scale of the cities. Nobody is going to go hungry because they’re too lazy to walk three blocks to the bakery.

I can see some people complaining that this is a bit too simple, but this attitude will likely soon evaporate after digging a bit. The fact is that you can have multiple miniature economic systems within a city and it can get very complex, at least in terms of layout. Each neighborhood can be served with their own food buildings for example that are independent of the others, yet some major buildings can serve the entire populace. And because different workers need different housing types, you can have rich and poor neighborhoods too. Some buildings even compliment each other when placed directly beside one another, something to strive for if at all possible in your master plan. It takes a lot of skill to master how to properly build out the limited space available. You just don’t need to get your hands dirty and push carts around.

The other side of Grand Ages Rome is the military part of the game. Here as well there are some innovative features that you might expect to find in a full-on RTS title like individual units’ experience levels and special abilities. And there is a great variety of units as well, probably more than served in the actual Roman legions, which were pretty cookie cutter. But here you have access to elephant cavalry, naval vessels and a host of foreign troops (in some missions) that have skills not prevalent within Rome itself.

Proper military use will involve not only resource but also time management. As an example, one of the most basic units you can recruit comes right from your citizens. These drafted soldiers start out pretty weak and rather green under the gills. They might be able to repel a slight barbarian incursion that you didn’t see coming, or didn’t have time to prepare for, but will break like water if outnumbered or facing professional troops. But, what you can do once they are formed is assign them to training duties. You will see them hacking at each other and generally practicing how to fight. It takes time, but eventually they will reach a new level of confidence. Then you can assign them to train again to level them up even more. This is impossible to do when under attack, so it’s best if you think about this early. Eventually they will even become proficient with a special skill, like throwing their javelins for a quick ranged punch before charging into the fray.

Of course training can only take units so far. Even your professional troops can train, but eventually you will need to take them into a real combat to continue to level. But lucky for you, the world of Grand Ages Rome has plenty of enemies. Mostly this is in the form of barbarians at the beginning of the game. Barbarians are fun to fight because unless they are formed into a hoard, you can normally crush them pretty easily. You did remember to train, right?

But the game also follows a story. Basically your family ran afoul of the tyrant Sulla, and was exiled. Now he’s dead and you have the opportunity to get back into politics. Also, depending on what family you choose, you will be given different bonuses. Some families are good at farming and feeding the populace for example, while others have more military prowess. Whoever you choose, there is quite an opening in Rome as Caesar and Pompey battle for control of the Republic. If you play your cards right, you can choose sides, and help put the people you back over the top. Along the way you will bump into historical figures like Cleopatra and Mark Antony, so keep those autograph books handy.

The graphics for Grand Ages Rome are pretty superb. People actually walk around the cities you build, though given the fact that you don’t micromanage them, you probably won’t be down at that level of zoom too much. One time you will zoom in is during combat, and there is a lot of it. Thankfully it looks great. Even individual units within mass formations do their own thing. There is no cheating or copying one move across an entire army. Even when units are training, they look great. In combat, you are really going to feel pretty powerful as your units slice through the enemy, sometimes in spectacular ways.

The one knock I would put on Grand Ages would be the sound. That seems to be the one area where developer Haemimont didn’t put in quite so much work. In one mission I kept hearing sounds like a dog was being beaten. I zoomed all the way into my city and searched everywhere to see what the heck was going on. Apparently there is a guy and a dog who wanders around down there, and the dog sounds like it’s rather distressed. Perhaps the man is a dog trainer or something. Anyway, the sound isn’t bad, but given how great everything else looks and how well the game plays, it just stands out a little.

The game comes with a robust multiplayer system that lets people challenge one another, or play cooperatively. There is even a ranking system where you can challenge someone online that has a similar skill level as yourself. The groundwork for multiplayer is impressive. Unfortunately, since I was reviewing Grand Ages a few weeks before it came out (the release date is March 17th) there was nobody to challenge. How great the multiplayer is will depend on how many players are online, but in any case, the multiplayer won’t fail because of the interface. Hopefully, lots of people will find and enjoy this game because I can’t wait to take on real opponents.

The real Rome wasn’t built in a day, and you probably won’t build (or rebuild) yours here either. There’s a lot of content packed into this title, and a decent tutorial to get you started. So it’s a great value, and currently on sale at Amazon for under $40.

Grand Ages Rome is one of the best Roman RTS titles out there. It combines a lot of facets like a good story, a complex yet easy to understand city building system and intense combat. Somehow, it gives simulation players just about everything they want without skimping in any one area. So it might be time to brush the dust off the horsehair of your galea and head back into the ancient world once more. The time of Rome really was a Grand Age, and this game does it justice.