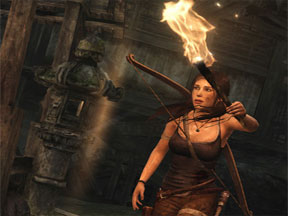 I admit I’ve never been the biggest fan of the Tomb Raider series. I did play the first Tomb Raider when it was released on the Sega Saturn. And yes, before all of you claim that the game was originally released on the PlayStation, despite what magazines like Electronic Gaming Monthly made you believe, it was first available on the Saturn. Regardless, it was an innovative title for its time, placing Lara Croft in a fully 3D world where she had to solve puzzles, evade traps, and shoot monsters and hunters to complete her goals.

Eventually I played the first Tomb Raider again on the PC, but only to try out one of the new 3Dfx accelerator cards that were all the rage at the time. Needless to say the experience was breathtaking, and a far cry from the underwhelming performance of the Saturn version. I also tried out the sequel, but to me it felt like more of the same.

From there I didn’t even bother to try the other Tomb Raider games and moved on to other ventures. Over the years I noticed a lot of Tomb Raider wannabes come and go, such as Indiana Jones and the Infernal Machine, and yes, the Uncharted series, which I still consider to me a Tomb Raider impersonator, even though it involved more action and shooting than other clones.

Since then Tomb Raider itself went under a sort of renaissance. After Angel of Darkness for the PlayStation 2 bombed, Core Design was removed from Tomb Raider development and it was handed over to Crystal Dynamics. Since then, they released several Tomb Raider games, including a remake of the first game named Tomb Raider Legend. However this most recent release is a retelling of Lara’s backstory, and it also ushers in a new way to play. And if you ask me, a much better way to play.

As a passenger on the expedition ship Endurance, Lara accompanies her colleagues to locate to lost kingdom of Yamatai. However, upon arrival at the Dragon’s Triangle, the ship is destroyed during a storm and Lara is stranded on an island, separated from her crew. She is abducted and brutally attacked by her captors, and has to bite off his ear to escape. From there she meets up with a mysterious man known simply as Mathius.

Mathius is the leader of a group of individuals on the island called the Solarii Brotherhood, who worship the Sun Queen, Himiko. Mathius wants to bring Himiko back to life, and plans to use one of Lara’s crewmates, Sam, as a vessel. So Lara not only has to locate her comrades, save Sam, and put an end to Mathius and his Solarii cult, but she must learn to adapt as a survivor as well.

And that’s what the game specializes in. When we first see Lara, she is frail and prone to suffering. Even after she hunts down a deer in the game and guts it for food, she tells the fallen deer, "I’m sorry." But as the game goes on, Lara develops a ‘come at me, I’ll kill you all’ attitude. It’s surprising to see such a turnaround so quickly, but it’s what brings her survival skills to the test.

In previous games, Lara’s double pistols were her trademark weapon. That is no longer the case. While they are treated in homage later in the game, her primary weapon becomes a bow. Sure she ends up getting pistols, shotguns, and an assault rifle, but the bow becomes her best friend.

As the game progresses, each of these weapons can be upgraded based on the salvage she collects, but the bow’s upgrades might be the best. Arrows come in both standard (perfect for stealth kills) and fire varieties, but there is also a special re-usable roped arrow that can attach to fixtures so she can use it like a zip line, or tightrope across an area. Not since Far Cry 3 have I enjoyed using a bow in a game so much.

Also, as the game progresses, she learns new skills for hunting, combat, and survival. For instance, the pick axe that Lara uses to scale jagged rock faces can also be upgraded for use in combat for a surefire kill.

Killing is something that Lara will specialize in right away, but it also happens to her a lot. This version of Tomb Raider is brutal. Lara gets shot, impaled, falls, crushed, smacked around, you name it. It can be pretty gruesome to watch at times. And some of the ragdoll-like falls she goes through in the game, you have to wonder just how she survives that. There is no way someone can survive falls like that for real.

Some of these sequences end up in something I wish would be left out of games soon: quick time events. Tomb Raider has a lot of them in scripted events. While they look amazing, they can be considered a somewhat lazy attempt to bring players into a game. But thankfully there is also a ton of places to explore and cool things to pick up, even after the main campaign of about 10 hours is finished.

There is also the classic Tomb Raider style exploration to go through in order to collect very rare artifacts. I do admit I find it funny to hear Lara say during her first few tomb explorations, ‘I hate tombs!’ However, as she goes through them, she actually describes what she sees in them, as well as their history, which is a really cool touch that adds to her character.

The return to Lara Croft’s roots is an amazing one. It might seem more like an action packed thrill ride compared to the past cave explorations, but it’s definitely a step in the right direction. I actually like this new Lara, and I can’t wait to see if Crystal Dynamics builds more onto the new direction that Tomb Raider is going. Currently, a lot of people are claiming that Bioshock Infinite is an early runner for Game of the Year. I’d have to say no to that, as my vote would go towards Tomb Raider instead.

Pros: An excellent retelling of the original story. More action-based compared to previous exploration based TR games. The development of Lara from frightened captive to hardened survivor is staggering!

Cons: Lara gets brutalized a lot, and some of her deaths can be rather disturbing. Supporting characters seem a bit stereotypical. A few too many quick time events for me.