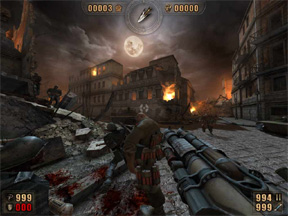 Painkiller: Battle out of Hell

I know what you are thinking (I always do, don’t I?): why is ‘puzzle boy’ reviewing another shooter? Well, when that shooter is an expansion pack to the best FPS I have played – Painkiller, you can believe I volunteered gladly. And I am glad I did.

Note: Just as a public service, in recognition how easy it might be to confuse "Painkiller: Battle out of Hell" with the landmark album from classic rock god Meat Loaf – "Bat out of Hell," this reviewer will, in addition to reviewing this fine title, point out major differences between the two.

No need to thank me.

Painkiller: BotH is pretty much everything you could want from an expansion pack. New monsters, new levels, new weapons, and a continuation of the storyline in the original.

The story continues right where the first one left off. You are Daniel Garner, auto- accident-victim-turned-celestial-assassin, and you are in Hell. In the prior game, Daniel thought, "Heaven Can Wait," and when down to Hell to rescue Eve. Now, the demon Alastor has taken Lucifer’s power and place, Eve is unconscious at your feet, and you are surrounded by minions. Thank goodness the intro movie is still rolling, right?

During the movie, Eve awakens and manages to gate you both out of there. Then you pull out the familiar map of Hell and plot your next move.

The levels of BotH are some of the creepiest yet, from an orphanage with psycho kiddies, to a theme park where the theme is torment and death. I feel I must put a warning label out here for anyone who as a violent phobia concerning clowns: Warning – EVIL CLOWNS! Of course there are also sexy nurses, so I guess they break even on that front.

The way the levels are set up, you are forced to go a certain way as old exits are barred while new exits open up. This gives the player an uncomfortable senses of enclosure, and total lack of escape, which just heightens the experience.

Unlike "Bat out of Hell," you will be just as revved up, but have 12 new places to go.

The visuals are, once again, stunning. The detail of textures is incredibly minute; and the environment changes whenever you blow something up or kill an enemy. Light and shadow do exactly what they are supposed to do, and the flames are extra flame-y. They set up each scene so that you see exactly what they want you to see, leaving your by-now-overactive imagination to fill in the gaps. This of course is the true goal of horror.

I did have one problem with the graphics though – they are too good, too good for most machines, that is. I played this game on a machine that met the ‘ideal’ requirements listed on the box, yet I was having severe lag when operating in the higher resolution modes. When I set it on the second lowest, I had no problems, and really, other than the screen size, I didn’t notice a very large difference between that setting and the higher ones.

"Bat out of Hell" has "Paradise by Dashboard Light". In "Battle out of Hell," you will wish you were in Paradise, or even that you had light as steady and comforting as a dashboard’s.

The sound is what makes this game the heart-stoppingly creep-fest it is. The background sounds are always appropriate to the environment (i.e. screaming/crying/{shudder} laughing children are all through the Orphanage level), and do their darnedest to keep you so totally distracted it’s hard to shoot sometimes.

The music adds to the oog factor, by adding to the mood that the level is trying to set. In Looney Park, you will hear an array of circus themes that are tweaked to be just the other side of wrong. When a combat breaks out, the familiar hard metal rock jam comes out, but you are usually to busy shooting or getting shot to take too much comfort from it.

The new weapons are great, and make a nice compliment to the old stand-bys. The SMG/flamethrower is sweet, and the sniper bolt gun (which allows you to zoom in on distant targets) is pretty useful at times. Of course, why a sniper weapon shoots three bolts in a burst I’ll never know, but that’s what it does.

As is now tradition in Painkiller, every weapon has a secondary weapon with its own ammo, and, although the weapons seem oddly paired at first (freeze canisters on a shotgun?), they end up being good compliments to each other (oh, I freeze the guy, then hit him with the shotgun and he shatters!).

Painkiller: Battle out of Hell is everything one could want in a sequel to a damn fine original game. It quite handily earns 4.5 out of 5 GiN Gems.