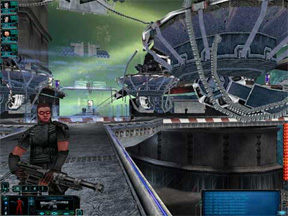 For such a futuristic title, Cops 2170: The Power of Law, seems to take a giant step into the past with its gameplay and user interface. If someone handed you the game in a blank box and said "play it and tell me when you think this game was made" you would simply shrug your shoulders and reply "1997?"

My skepticism of the game started right after I watched the opening movie and jumped into playing. And boy, do I mean jumped. You start standing in a police station without any guidance or tutorial. It took me upwards of forty-five minutes just to figure out basic movements and the other facets of the user interface like reloading your weapon. By no means am I an amateur at gaming so needless to say being this utterly clueless at the start is not only rare but incredibly frustrating.

As I mentioned, you start the game in a police station taking control of Katy, a nanve and young police academy graduate just getting ready to hit the mean streets. You can gather a team in order to squash the evildoers and run around the streets blowing away all the bad guys in sight. That is, if you can find them or figure out how to shoot!

Throw in some crooked cops coupled with the naivety of your character and so starts an interesting combination since you can choose which side to help. That quickly gets played out as the story dissolves and you are left baffled by the emptiness of dialogue and storyline. Oh, I almost forgot"it isn’t only humans. You also fight mutants and robots. Stop me if this sounds like it has been done before.

You cannot pick this game up and start playing without going through the pains of learning the inventory system and archaic user interface. The previously mentioned learning curve is insanely high for even the experienced gamer and first time turn-based players need not apply unless you want to ruin your taste buds for future turn-based games. Having to mouse over to the extreme sides of the screen to view other parts of the board can occasionally create a whirlwind of screen movement leaving you miles away from your character.

Thankfully, you can zoom in on your characters when you need to move so the point and click action has less room for error the closer you are zoomed. There is still the chance of accidentally panning farther than you were anticipating. Believe me, it will happen.

The gameplay is more than lacking. It uses action points in order to move your characters around which initially creates a long and tedious process of moving even the shortest of distances as your points dwindle rather quickly. Couple that with the fog of war that hides more than probably should be hidden, you have yourself a frustrating game of cat and mouse on many occasions as you try desperately to finish the level you are on by wiping out the lone remaining enemy.

There will be countless times that you move your team into a seemingly perfect position only to be ambushed on the next move due to the painful fog of war. Not only will you not be able to see the opposition but there are many times where one shot will kill your character. You will find yourself staring down the barrel of an enemy gun numerous times thinking "where did he come from!?". This becomes utterly mystifying and annoying when you are making a concerted effort to find the final villain on the board only to have yourself blown away by the invisible man.

The size of the board does not bode well for those looking to squelch the enemy quickly and move on to a different setting. The first board itself takes quite a bit of time to explore, especially since the user interface is confusing and poorly laid out causing you to spend most of your time trying to remember the controls.

To add fuel to the fire of poor gameplay, you have the AI which is nothing to write home about. As you slowly work your way through the boards, you will notice the computer randomly moving the enemy around. I stared and stared wondering if it was just some ingenious movement that I was overlooking, but alas it was simply random walking and stopping, walking and stopping.

At times, the non-existent AI makes for shockingly interesting gameplay since you have to stop and think that the enemy might be anywhere! As for your own team, each player has the ability to improve in certain aspects such as agility and strength, which makes for a mild desire to persevere and keep playing. Couple that with a decent arsenal that can become available, you have a respectable team that can be formed. Equipping and figuring out the inventory system is what can become bothersome.

Graphically, the game is lacking to say the least. The background is one of the few redeeming factors as the environments are rather detailed and give you a good futuristic feel. Sadly, the game needs a bit more than environment to pull itself out of the hole it is in.

To dig itself deeper, the sound and dialogue really nail down the nearly shut coffin on this underachieving game. Combine the cheap techno with random police blotter sounds and the absolutely horrendous voice-overs and you find yourself muting in-game sound and listening to your favorite tunes within minutes. As for sound effects, ask your child or younger sibling to come in and see how similar their best gun shot sound is to that of the game.

No story line, poor sound, and an excruciatingly painful learning curve pretty much sum up the worst of the worst in Cops 2170: The Power of Law. I find it hard to believe that this can hold anyone’s attention for more than about an hour because that is just about how long it takes to figure the controls. By the time you figure out exactly what you are doing and where you are going, you are ready to scream and catapult your disc out the window.

I’m sure there are plenty of turn-based games out there that can be easily substituted for this game. I’d even suggest looking at some older titles if you are really craving a futuristic turn-based game. Even after playing a game that you didn’t particularly care for, you can normally find something positive about it. Sadly, after a few weeks of playing Cops 2170, I can’t think of anything.