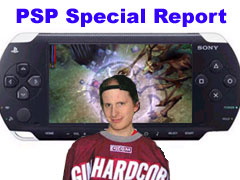 For the last week, the press has been swamped with footage of Sony's PSP handheld console. Their "Take Me Out" advertisements are on every television channel possible (even listed as an advertisement on my TiVo), and even the South Park creators wrote an episode about Kenny using a "golden PSP" to defend Heaven from the forces of Satan.

Still I must ask, if Kenny is so poor, how did he get the $250 to buy a PSP?
Nonetheless, the PSP has taken the gaming community by storm. However, on launch day (March 24th) very few stores decided to sell it at midnight, but instead opening as early as 8am. There wasn't as much a turnout as the DS had, but partly because of the post-Christmas release (and of course, Nintendo's limited distribution of the DS was a factor).

Now that I have tested out the PSP for a few weeks, I must say the final results are quite impressive. And I will do some mini-reviews of four of the system's most popular launch titles.

One thing's for sure, the PSP is a looker. Unlike the boxy design that Nintendo has used with the Game Boy Advance SP and the DS, Sony's design features a wider body, but that is mostly because of the large screen. The display is a 16:9 aspect ratio, measuring over four inches. It is by far the largest display ever seen in a handheld console, not to mention the brightest. Truly the display is a sight to behold.

Button layout will be familiar to anyone using a Dual Shock controller. The only exception is the two shoulder buttons (as opposed to the Dual Shock's four). Below the D-pad lies the analog nub, which differs from the Dual Shock as there is no shaft. While it works as well as a stick, it does take a little getting used to.

The left side hosts the Memory Stick Pro Duo slot. Standard Memory Sticks will not fit into the PSP, but the PSP Value Pack comes packed with a 32MB Stick Duo. The headphone jack is on the bottom, but only the headphone remote can plug into it. It is from the remote control that any set of headphones (with a mini jack) can be plugged in.

On the back of the PSP is the UMD (Universal Media Disc) drive. The UMD is a proprietary storage medium used by Sony consisting of 1.8 GB optical discs smaller than those used on the GameCube, and are stored in a protective caddy.

The PSP uses the XMB (Cross Media Band) menu system. From each menu (Settings, Photos, Music, Video, and Gameplay) there are submenus to access the UMD, Memory Stick, and other utilities. The menu interface is simple and does what it should.

In addition to gameplay, the PSP is also capable of displaying JPEG photos, playing MP3 music files, as well as running MPEG-4 videos. A separate USB cable is needed to connect the PSP to a PC, and when connected, it functions as an external PC drive. Transferring music files and photos are easy. All it takes is a matter of "drag and drop" while the PSP is in USB Mode.

Video files, on the other hand, is a different story. Since the PSP only uses the MPEG-4 standard, a video file needs to first be converted (using an external program. I ended up using the 3G Converter), then both the video file and thumbnail image need to be dragged and dropped into a separate folder. Lastly the file needs to be converted into a filename under the formula M4V#####, where the last 5 characters are digits. It is a pain to convert, and hopefully Sony will come out with an application to make the process much easier.

Movies are also planned for sale in the UMD format. Disney has contacted GiN about reviewing some of their top movies in the UMD format, so some of the biggest companies are going to be backing the PSP movies, which can only be a good thing for everyone involved.

The initial shipment of PSPs came packed in with a UMD of Spider Man 2. Though it is actually presented in the 16:9 ratio as opposed to the original 2.40:1 ratio, the video quality is comparable to that of a DVD running on an HDTV. It is very stunning to look at, and I'm curious to see how future UMDs will turn out. So hurry up Disney and get some of those movies in format.

The PSP has a built in Wi-Fi (802.11b) transmitter. Reception on my wireless router has been quite good, but there hasn't been any software yet to test it out yet. The reason is because the PSP has two methods of connectivity. The first method is called ad hoc, which works similar to a link cable from a GBA. Multiple PSPs are connected wirelessly to each other.

The other method is called Infrastructure mode, and it is here that a PSP is connected to the Internet via a Wi-Fi hot spot such as a wireless router. Sadly as of this writing, none of the titles I have tested use Infrastructure mode, but hopefully as E3 gets closer, that will be a different story. In addition, hopefully Sony will also provide a web browser, but some hackers were able to find an alternative browser through WipeOut Pure.

As always, no console is perfect, and the PSP is no exception. First of all, the use of proprietary storage medium (i.e. the Memory Stick Pro Duo) will disappoint those who use Palm Pilots (running with SD Memory Cards). Secondly with the screen being so slick, it smudges very easily, but thankfully Sony packed in a cleaning cloth to remedy this.

Battery life is a concern as well, but the true life of the battery depends on the use of the PSP. Simple applications might allow the battery to last up to six hours, but CPU intensive titles, combined with heavy UMD and Wi-Fi use, will drop the battery life immensely.

Then there is the "dead pixels" situation. There are reports of PSPs having pixels that are permanently light or dark. I noticed a few on my PSP but they aren't a large concern. More critical cases of dead pixels are being addressed by Sony and they will be replaced in accordance with the standard one-year warranty.

So my final rating for the PSP would be a perfect 5 Gems as a Game Console and a very good 4 GiN Gems as a Multimedia Handheld.

The PSP launched with a vast number of titles, and I was able to test out four titles for review:

UNTOLD LEGENDS: BROTHERHOOD OF THE BLADE.

In the spirit of Diablo and Baldur's Gate: Dark Alliance, Legends is a standard fare dungeon romp. The gameplay is pretty average by dungeon standards and the load times on some of the menus is torture. The game's true shining grace is the ability for four heroes to fight together wirelessly, but only in Ad Hoc mode. If you have played any of the Champions of Norrath series on the PS2, then you will feel right at home here as most of the controls are identical as well as many of the combat strategies. This is a really fun title to have. Here are my full rankings for it.

UNTOLD LEGENDS: BROTHERHOOD OF THE BLADE

METAL GEAR AC!D: As a huge Metal Gear fan, I find it weird to play a card based version. Surprisingly the game plays quite well, and it fits the spirit of the Metal Gear franchise well. Even for someone who never played a card game in the past (such as Magic, Yu-Gi-Oh, and Duel Masters), I was able to catch on early, and have enjoyed playing it. Sadly the soundtrack needs work, and David Hayter is nowhere to be found.

RIDGE RACER: After two subpar RR titles (RR5 and R: Racing Evolution), Namco returned to its roots with perhaps the best RR title ever made. Combining aspects from every title in the series (except for R), and featuring the most beautiful graphics seen so far on the PSP, Ridge Racer might be one of the best titles for launch. No wonder it is sold out everywhere.

LUMINES: If Ridge Racer is one of the best titles, Lumines is THE best. Created by the same designer of Space Channel 5 and Rez, Lumines is a simple puzzler where players must use falling blocks to form squares of the same color. It might sound simple but what makes the game great is the impressive visuals and the amazing soundtrack, which varies dynamically on the gameplay. This title is quick yet addictive, just the type of game the PSP is designed for.

In the end, the PSP is an amazing gaming system. Nintendo might have met its match, and maybe they might want to consider making more mature based consoles. While the PSP might falter a bit in multimedia applications, you can't go wrong with what it is meant to do: play games.