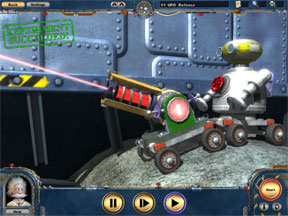 I started playing Crazy Machines 2 while getting ready to start another quarter of online college. At first it was just something meant for me to use as a procrastination tool. Well, it passed THAT test with flying colors. Over the following two days I didn’t get much college prep done at all. Instead I was too busy enjoying the complex problems of Crazy Machines 2. And then adding in the Invaders From Space DLC made everything even more crazy. I had to stop playing before I failed out of my first classes.

In case you’re like me and have never played Crazy Machines before, the game’s premise is both simple and complex. Each stage consists of getting something from point A to point B, with a secondary objective. That’s the simple part. The complex part begins when you start tinkering with all of the options.

For one level I launched a bowling ball with a catapult into a spring which knocked over a lever, opening up a chute that let the ball drop into a basket. That was a simple puzzle compared to many of the later ones.

This game gave me two flashbacks of nostalgia. The first one came from the little springs. They reminded me of a dialed down version of the ones from the old Sonic games I played growing up. Next came the flashback to the old school board game Mousetrap. It had all those moving parts, and it never worked for me. Unlike Mousetrap, all parts in Crazy Machines 2 work just fine.

One humorous thing I enjoyed was that the man giving you hints and directions looks exactly like Albert Einstein. He even came complete with frizzy hair and mustache. If you can solve some of the later puzzles, you might feel a bit like Einstein too.

While this game is quite enjoyable it does has a few drawbacks. One negative is that it can get a little redundant. No matter what way you spin it, you’re doing the same thing, just in a different way with a harder difficulty each level. If you like it, then its more of a good thing for you, and certainly worth the money, as we are talking about hours and hours of content. But you might have to step away for a while and do something else from time to time.

Controls on this game are a little bit tricky if you are on a laptop. I didn’t take any points off for this, but there are some adjustments you have to make. Zooming needs to be assigned buttons and you will be unable to change perspectives unless you buy a mouse. It does run fine on lower-end systems, but for the full experience you probably are going to want a full desktop system, and a full keyboard.

And the music is about average. It had its moments where it was blending in perfectly, while other times it was distracting.

So now that I was completely familiar with the core game, I decided to take the new DLC for spin, which was the point of this whole review. And let me just say, wow, it’s quite an addition.

Just when you think you have everything figured out, the Invaders From Space DLC really kicks the mad scientist quotient into high gear. Whereas we had electricity, candles, levers and fulcrums before, now we have ray guns, spaceships and even aliens who can become a part of your crazy machines. While the puzzles are still based on physics, which is to say the game is internally consistent, you can now manipulate certain elements like gravity, which increases both the challenge level and the fun.

For the first time, you can even work with species of aliens, making them part of your machines. The creatures follow the same rules as other objects for the most part, like The Bouncing Alien, which takes objects that land on it and bounces them back using physics rules. Then there is the slimy Species 1337 which can be used in interesting ways that you can discover as you play. And there are robots too, what sci-fi game would be complete without them, which can be used to trigger a variety of objects, or can act as a goal for the level.

But perhaps the most impressive thing about the Invaders From Space DLC are the levels themselves. They are pretty amazing, and totally different from the main game. You get to do things like try to make aliens play volleyball, or shoot down invading spaceships, all using the same physics-based puzzles found in the core game.

As an add-on, it puts a lot of content into Crazy Machines 2 for not a lot of money. It almost makes Crazy Machines 2 a completely different game, with all the flavor of the main title. And isn’t that what a DLC is supposed to do for us? Plus, the entire DLC costs just $3. I guarantee you won’t get more bang for your buck anywhere else.

Crazy Machines 2 is a fun puzzle game on it’s own, with the slight problem that it can get a little repetitive after a while. However, when you add in the Invaders From Space DLC, it really ups the amount of content, level types and just about everything else. It makes an already good game great, and adds even more content to a pretty full experience.

So it’s not crazy at all to love this title. Rated E for everyone, Crazy Machines 2: Invaders From Space is fun for all ages.